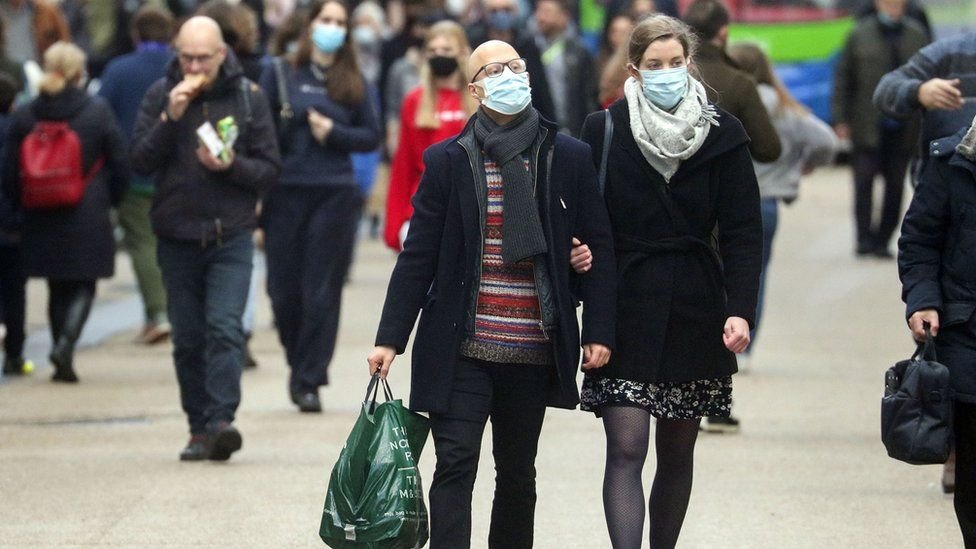 Six million more people in the east and south east of England are to enter tier four on Boxing Day, Health Secretary Matt Hancock has announced.

The places moving into the highest level of restrictions - which include a "stay at home" order - border the areas already in tier four.

A number of areas will also move up into tiers three and two.

Mr Hancock also revealed that another new coronavirus variant from South Africa has been detected in the UK.

He said anyone who had been there in the last two weeks must quarantine immediately.

On Wednesday, a further 39,237 people in the UK tested positive for virus - an all-time high - and there were 744 deaths within 28 days of a positive test, according to government figures.

However, cases were thought to be higher in the UK during the spring peak when testing was much more limited.

The health secretary told the Downing Street briefing the old tiering system was not enough to control the new variant of the virus.

Across the country, cases have risen 57% in the last week, he said, and hospital admissions are at their highest level since mid-April.

The rises have been in places neighbouring areas already in tier four, he said, adding that East Anglia had seen a "significant number" of cases caused by the new fast-spreading variant.

Areas moving to tier four are: Sussex, Oxfordshire, Suffolk, Norfolk, Cambridgeshire, Hampshire, with the exception of the New Forest, and the parts of Essex and Surrey not already in the toughest restrictions.

The additional six million going into tier four takes the total number of people under the toughest restrictions to 24 million, or 43% of England's population. A further 24.8 million will be in tier three.

Mr Hancock said: "This Christmas and the start of 2021 is going to be tough. The new variant makes everything much harder because it spreads so much faster.

"But we mustn't give up now, we know that we can control this virus, we know we can get through this together, we're going to get through it by suppressing the virus until a vaccine can make us safe." 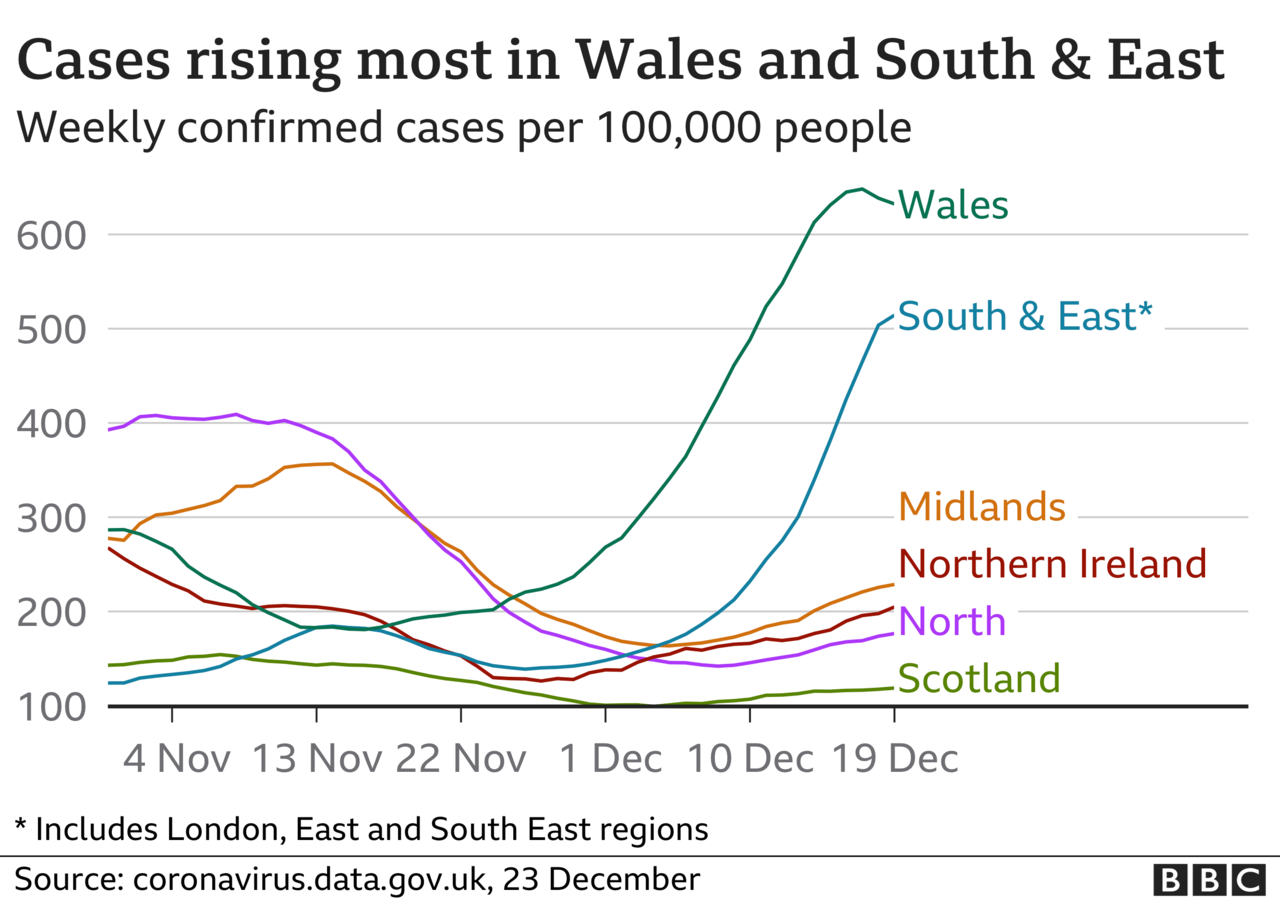 People in these areas also cannot meet other people indoors, unless they live with them or they are part of their support bubble, even on Christmas Day, when rules on household mixing are relaxed across the rest of England, Scotland, Wales and Northern Ireland.

Mr Hancock also announced that other areas would move into higher tiers.

Areas moving to tier three are: Bristol, Gloucestershire, Somerset, including the North Somerset council area, Swindon, the Isle of Wight, the New Forest and Northamptonshire as well as Cheshire and Warrington.

Cornwall and Herefordshire will move into tier two.

The UK's devolved administrations have also tightened restrictions to combat a rise in cases, with Wales going into another lockdown earlier than planned over the weekend. Mainland Scotland and Northern Ireland start new lockdowns on Boxing Day.

Anyone singing In the Bleak Midwinter may want to write another verse.

It's likely the NHS will soon be dealing with more Covid patients than at the peak in April.

The new variants are causing concern - especially as the one detected first in the UK continued to spread even during the November lockdown.

And cases, numbers in hospital and deaths are all going up.

Vaccines will be the solution, but they take time to roll out and until then it is going to be rough.

The only other tool we have to stop the virus spreading is reducing our contacts with other people.

That's why millions more of us are moving up the tiers on Boxing Day.

The hope is that come spring the virus's grip on our lives will start to ease.

The health secretary also said two cases have been detected of another new variant of the coronavirus in the UK.

Both were contacts of cases who have travelled from South Africa over the past few weeks, he said.

He said: "This new variant is highly concerning because it is yet more transmissible and it appears to have mutated further than the new variant that has been discovered in the UK."

The health secretary said both cases and close contacts of the cases have been quarantined.

There are immediate restrictions on travel from South Africa and the government is telling those who have been in contact with anyone who has been in South Africa in the last fortnight that they must quarantine.

The measures were temporary, he said, while the new variant was analysed by scientists at the government's research centre at Porton Down.

The health secretary also announced an expansion of mass testing and the vaccination programme.

Community testing will carried out in areas with the highest infection rates, he said, with 116 areas signing up.

Vaccinations have now begun in care homes, Mr Hancock said, with Chelsea pensioners among those set to receive the jab. 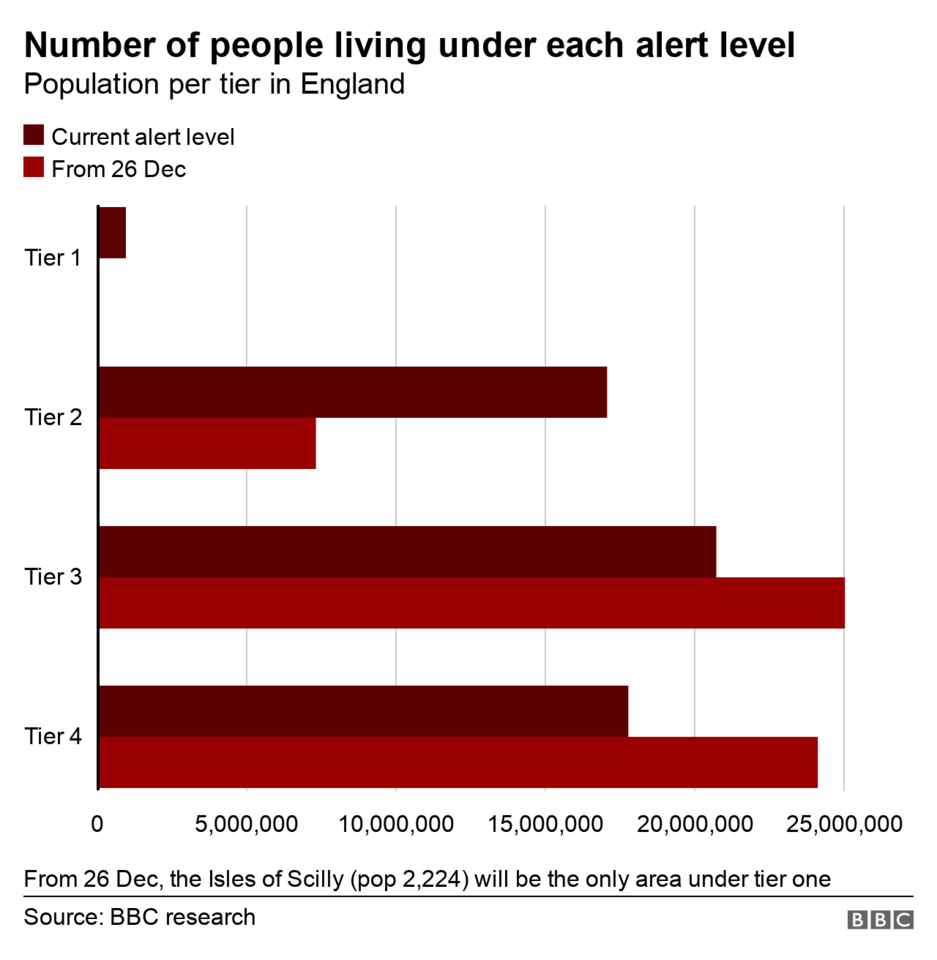 He said: "Amid all this difficulty, the great hope for 2021 is of course the vaccine.

"The vaccine is our route out of all this and however tough this Christmas and this winter is going to be, we know that the transforming force of science is helping to find a way through", he said.

It comes as the first trucks began leaving a temporary lorry park in Kent, where they had been stuck since France closed its UK border on Sunday amid concern about the new variant.

France has ended its ban on UK arrivals on condition of them having a negative coronavirus test less than 72 hours before departure.

On Wednesday, Northern Ireland became the latest country to confirm the presence of the new strain. It has already been detected in England, Scotland and Wales, as well as a number of countries on the continent. 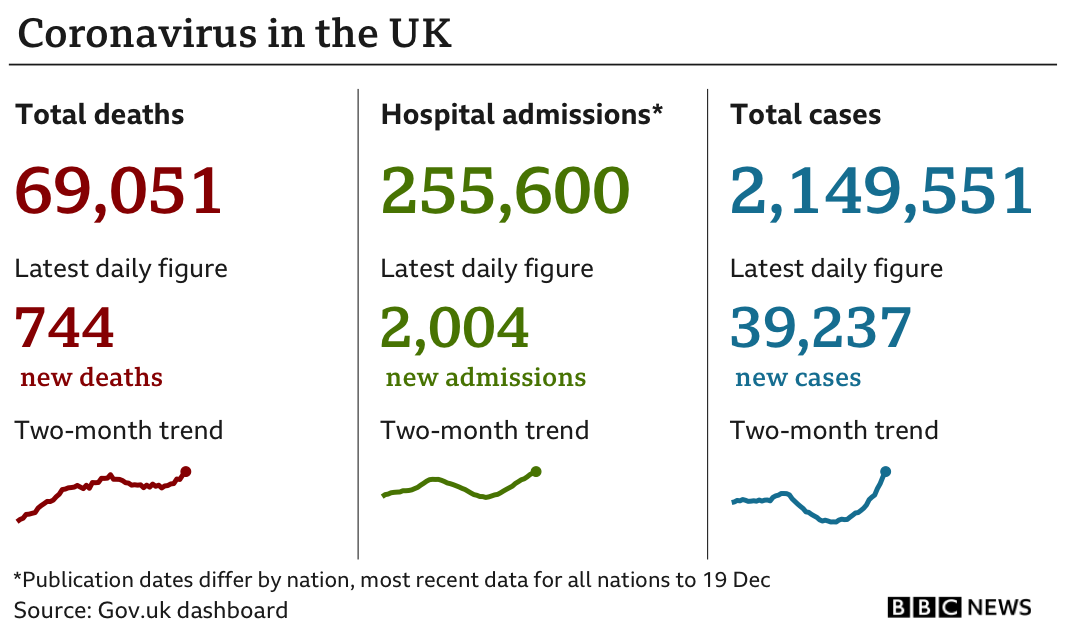