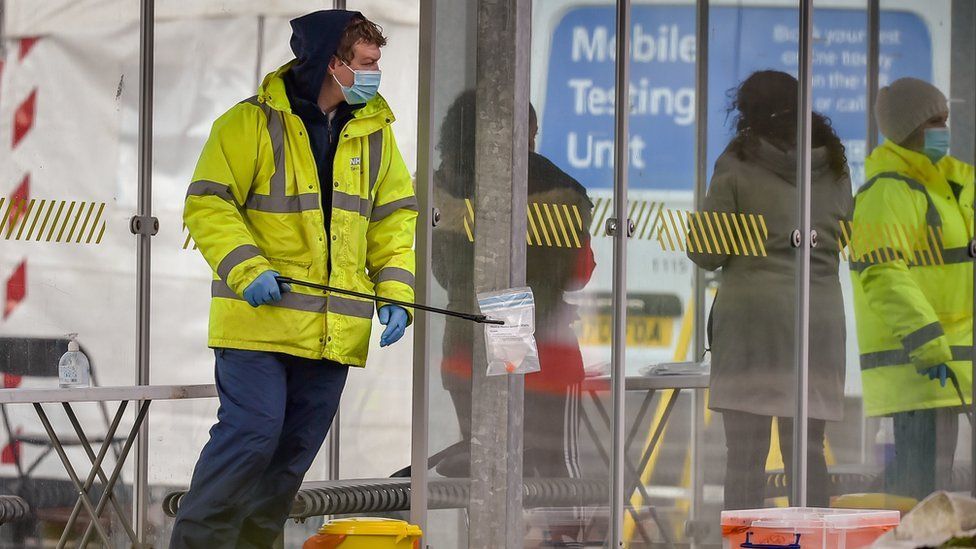 Last week, it was announced that six cases of the P.1 variant had been found in the UK - but the identity of one of the cases was unknown.

The person, who lives in Croydon, has been traced, as have their contacts.

Health Secretary Matt Hancock said the person "stayed at home" and there was no sign of any onward transmission - but local testing is being rolled out.

Scientists say the variant appears to be more contagious and there are concerns vaccines may not be as effective against it.

But Dr Susan Hopkins from Public Health England said it hoped vaccines would have a strong impact on reducing hospitalisations and deaths in cases of the new variant.

News that the Brazil variant had been found in the UK was released last Sunday. Three cases were found in England, and separately three in Scotland.

The three cases in Scotland were all oil workers who were returning to their families from Brazil, via Paris and London. Health officials have been trying to trace all the passengers who were on their flight from Heathrow to Aberdeen.

In England, two of the cases are from the same household in South Gloucestershire who tested positive after someone returned from Brazil on 10 February.

The third case in England - now confirmed to be in Croydon - was unknown for several days after he or she failed to register their test properly.

Dr Hopkins said the person was finally identified when they called the NHS 111 number, after officials had spent days contacting potential households.

The person lived in a household that had recently returned from Brazil and all of them had quarantined at home, she added.

Mr Hancock said contact-tracers had worked "flat out" to narrow the search.

"The best evidence is this person in question stayed at home and there's no sign that there's been any onward transmission but as a precaution we're putting more testing in in Croydon, where they live, to minimise risk of spread," he said.

Earlier this week, Mr Hancock said work was under way to tweak the vaccines to make them a better match for some of the new strains.

Dr Hopkins said there was not yet data to show whether the vaccine was effective against this variant - but there was some data for the variant from South Africa "and we expect that it should at least perform in a similar way".

"We do need to wait for studies to come out from South America and in particular Brazil, and those will come but it will take weeks rather than days I'm afraid."

The variant has been designated "of concern" because it shares some important mutations with the variant first identified in South Africa.

One of these mutations - called E484K - may help the virus evade some of the immunity people may have already built against Covid.

Preliminary data from Manaus - the Brazilian city hit hard by this P.1 variant - suggested the variant could be up to twice as transmissible as earlier Covid.

But experts said this should not be used to predict what might happen in the UK.

One of the lead researchers said it was unlikely P.1 would quickly take off in Britain when only six cases had been identified and these were being closely monitored.

Meanwhile, two-fifths of all adults in the UK have now had their first dose of the vaccine, Mr Hancock also said at Friday's press conference.

He said the fall in the number of deaths was accelerating - down 41% compared with last week - which suggested the vaccination programme was working.

"What this all shows is that the link from cases to hospitalisations and then to deaths that had been unbreakable before the vaccine - that link is now breaking," he said.

There have been another 5,947 cases announced and a further 236 people recorded as having died within 28 days of testing positive.