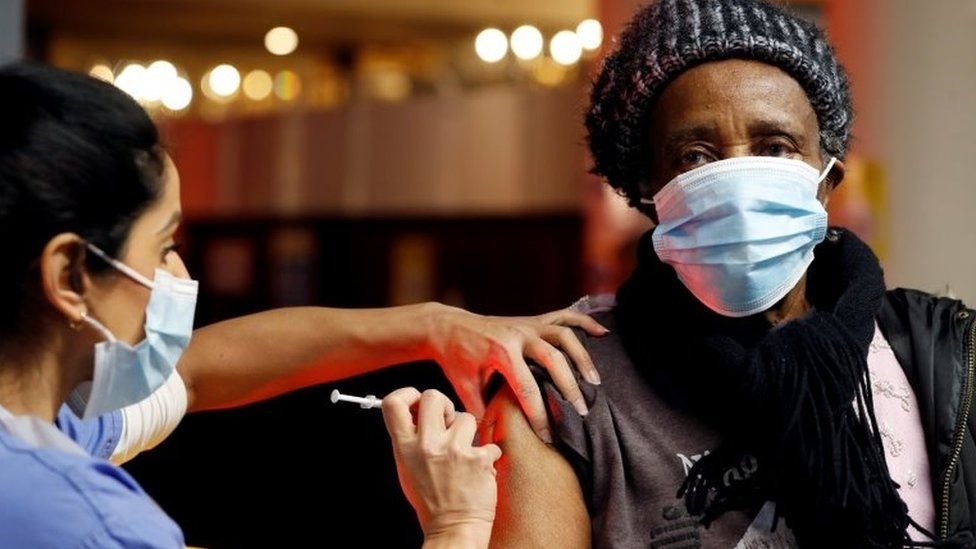 People in their 70s and the clinically extremely vulnerable in England are now among those being offered the vaccine.

However, Health Secretary Matt Hancock said UK data showed more people were in hospital with Covid than ever - and urged people to follow lockdown rules.

Speaking during a Downing Street briefing, Mr Hancock said more than half of those over 80 and half of elderly care home residents had been vaccinated.

He said that in some parts of the country the "vast majority" of people in their 80s had had their first dose - and specifically congratulated Slough for having already vaccinated every single elderly care home resident.

Earlier, Work and Pensions Secretary Therese Coffey had said people in her constituency in the Suffolk Coastal area had told her some over-80s, and even over-90s, had not been invited for a vaccination while younger people had been.

When Mr Hancock was asked why some areas of the UK were reporting not having enough vaccines, he said "supply is the rate-limiting factor".

He said the government was now "prioritising the supply" to places that needed to vaccinate over-80s - but did not want to stop areas that had progressed well from pressing on with vaccinating their other priority groups.

The Covid vaccination programme continues to gather pace. More than four million people have now received their first dose, meaning half of those targeted to start with - the over 80s, care home residents and health and care staff have now been vaccinated.

In some areas the figures are close to nine in 10, which is why ministers in England have given the NHS the green light to start inviting those in their 70s in for vaccination.

The progress means the UK continues to be among the countries with the highest vaccination rates globally.

Challenges remain though. The announcement last week that the supply of the Pfizer-BioNTech jab will be slower than anticipated in the coming weeks will have an impact.

While the Oxford-AstraZeneca vaccine is now taking up a greater share of the UK's supply, the Pfizer-BioNTech is still a crucial part of the programme and will mean the pace of rollout will be slower than it would have been otherwise.

Ministers are confident the mid February target to offer 15 million high-risk people a vaccine will not be affected - there is already enough vaccine in the country for them - but it again illustrates why there is such nervousness about supply chains. 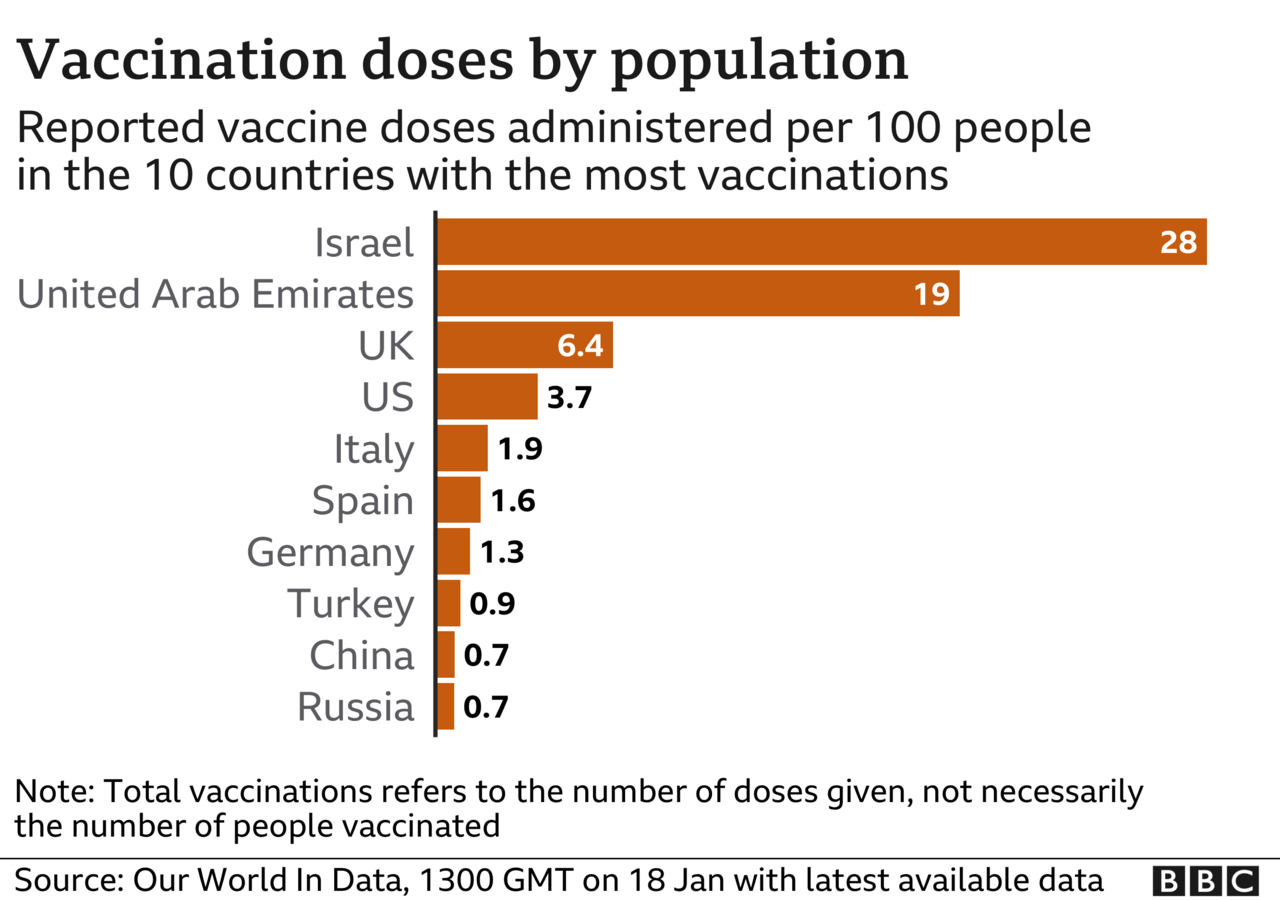 A further 599 people have died within 28 days of a positive coronavirus test, according to the latest government figures. Figures are often lower on a Monday because of lags in reporting data over the weekend.

It comes as 10 further mass vaccination hubs opened across England, adding to seven already in place.

Speaking during a visit to a vaccination centre in Oxford, Prime Minister Boris Johnson said it was "right" to offer the jab to other priority groups from this week.

"I think actually the whole of the UK is going very well. And, overall, the pace of the rollout is very encouraging," he said.

He warned there would be no "Open Sesame" relaxation of Covid restrictions, adding that any easing was reliant on the vaccine rollout being a success and there being no further concerning variants of the virus.

The number of people who have received their first dose of the vaccine is now 4,062,501 - which is more than have tested positive (3,433,494) in the UK since the pandemic began.

The expansion of the vaccination programme means it now includes priority groups three and four - people in their 70s and clinically extremely vulnerable individuals.

However, people in the top two groups - care home residents, those aged 80 and over, and front-line healthcare workers - should still be prioritised for vaccinations, the Department for Health and Social Care said.

Nadhim Zahawi, the minister responsible for the vaccine rollout, said that although vaccine supply remained "lumpy", he was "confident" the government would meet its target to vaccinate all 15 million people in the top four priority groups by 15 February. 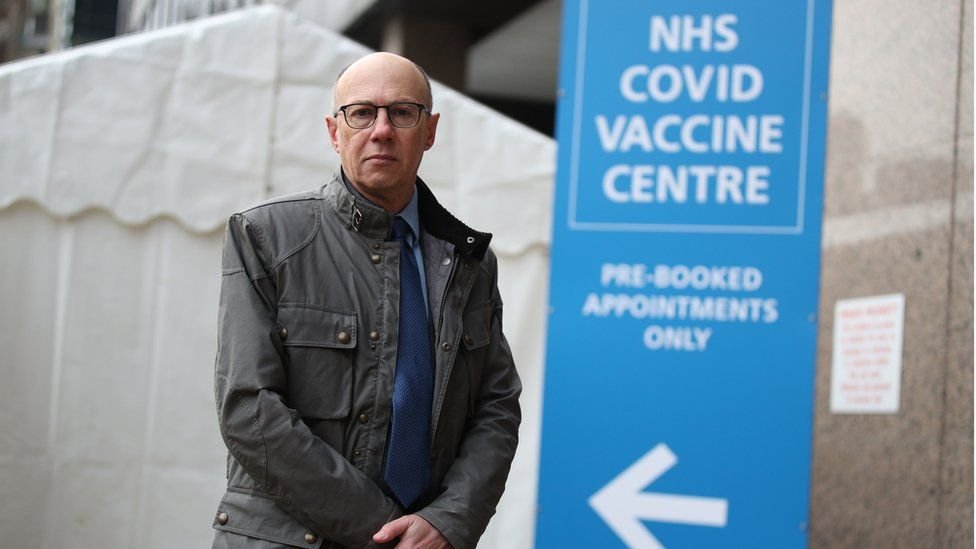 Visiting the NHS Covid Vaccine Centre in Wembley, north London, Prof Stephen Powis said there were signs in the capital that growth and infection rates were slowing

Meanwhile, Prof Stephen Powis, national medical director for NHS England, said there was more pressure on the NHS than ever before.

Speaking alongside Mr Hancock in the briefing, he said around 15,000 people had been admitted to hospital since Christmas Eve, adding: "That is well over 20 hospitals worth of patients."

He said it would be "some time" before the vaccination programme begins to reduce pressures on hospitals.

In Oxfordshire, hospitals have postponed routine operations because of a high number of coronavirus patients.

And the BBC's Clive Myrie has been to the Royal London Hospital to report on staff struggling to cope.

The new mass vaccination centres are in:

*  The Lodge in Wickford, Essex

*  The park-and-ride at Askham Bar, York

Dr Rupert Pearse, a consultant in Intensive Care Medicine at a London hospital, said although it appeared that infection levels had peaked in the capital, cases were still rising elsewhere in England, including the North West and Yorkshire, adding there was "still cause to be concerned".

He told BBC Radio 4's World At One that hospital admissions tended to "lag seven to 10 days behind the peak in infections", with intensive care admissions coming 48 hours after that.

He said that hospitals that are very close to the maximum number of beds they can give to Covid patients were "still very worried about what will happen in the coming days".

Dr Sarah Burford, a GP in Wellington, Somerset, who has been helping lead the vaccine rollout in her region, said it was going "terribly well" but that "a few" patients had turned up out of the blue looking for a jab.

She told BBC Radio 4's World At One programme that her four vaccinators were each giving a jab every seven-and-a-half minutes.

Dr Burford added the over-80s and frontline healthcare workers were being invited for jabs, and her team's "priority" for this week and next would be vaccinating care home residents and staff.

She said that although most people were being patient, fielding calls or walk-in inquiries about when people could expect to be vaccinated was only delaying staff from administering jabs.

Meanwhile, Welsh First Minister Mark Drakeford has defended the speed of the vaccine rollout in Wales, insisting the nation is "on track" to vaccinate all top four priority groups by mid-February.

He told Today that Wales's supply of the Pfizer jab was not being used all at once as it has to last until a delivery in February.

In Wales, 151,737 people have received a first dose of a Covid vaccine, according to Public Health Wales, and in Scotland, First Minister Nicola Sturgeon announced that 264,991 people have had a first dose of the jab, with 80% of care home residents having now been vaccinated.

While the prime minster said the UK was making "huge progress in our fight against the virus", he also expressed concern about that progress being derailed by new - currently unknown - variants of the virus.

As such, he announced on Friday that, from this week, all travel corridors are to be closed.

That means that anyone arriving in the UK - with only a small number of exceptions - will have to quarantine. Under current rules, anyone flying into the country from overseas also has to show proof of a negative Covid test before setting off. 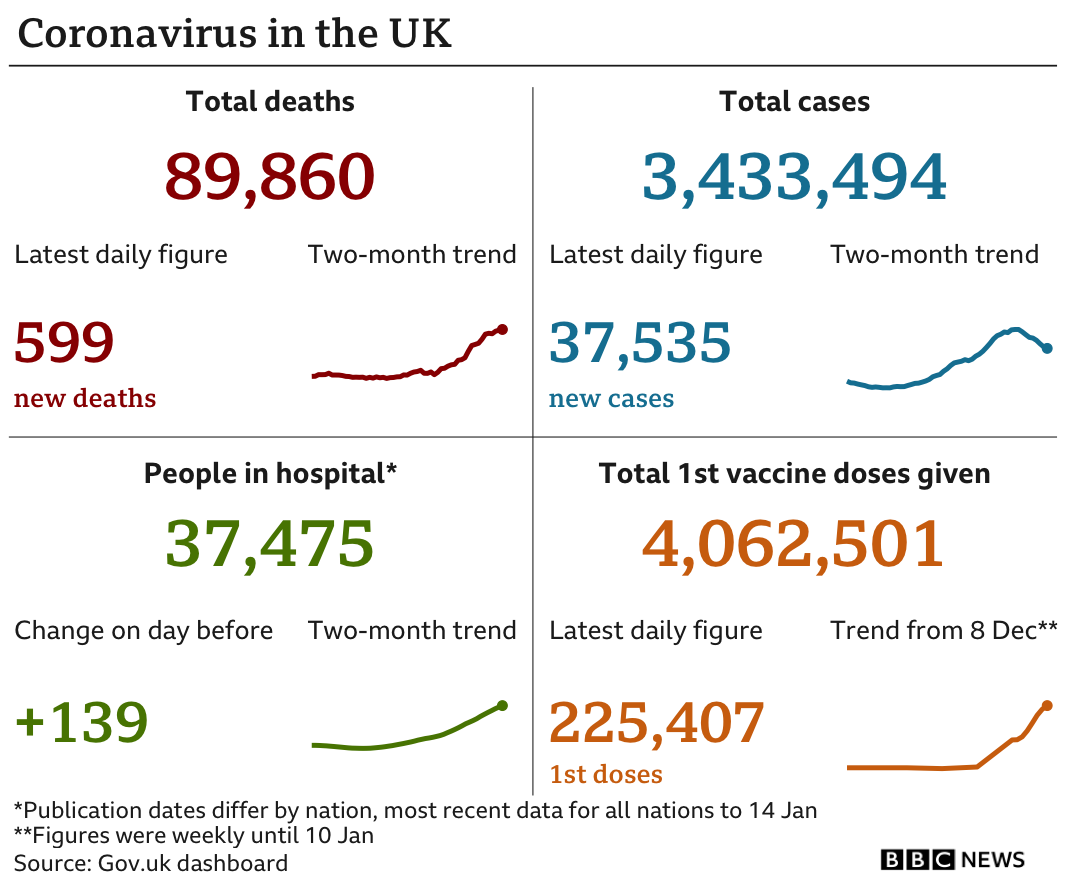 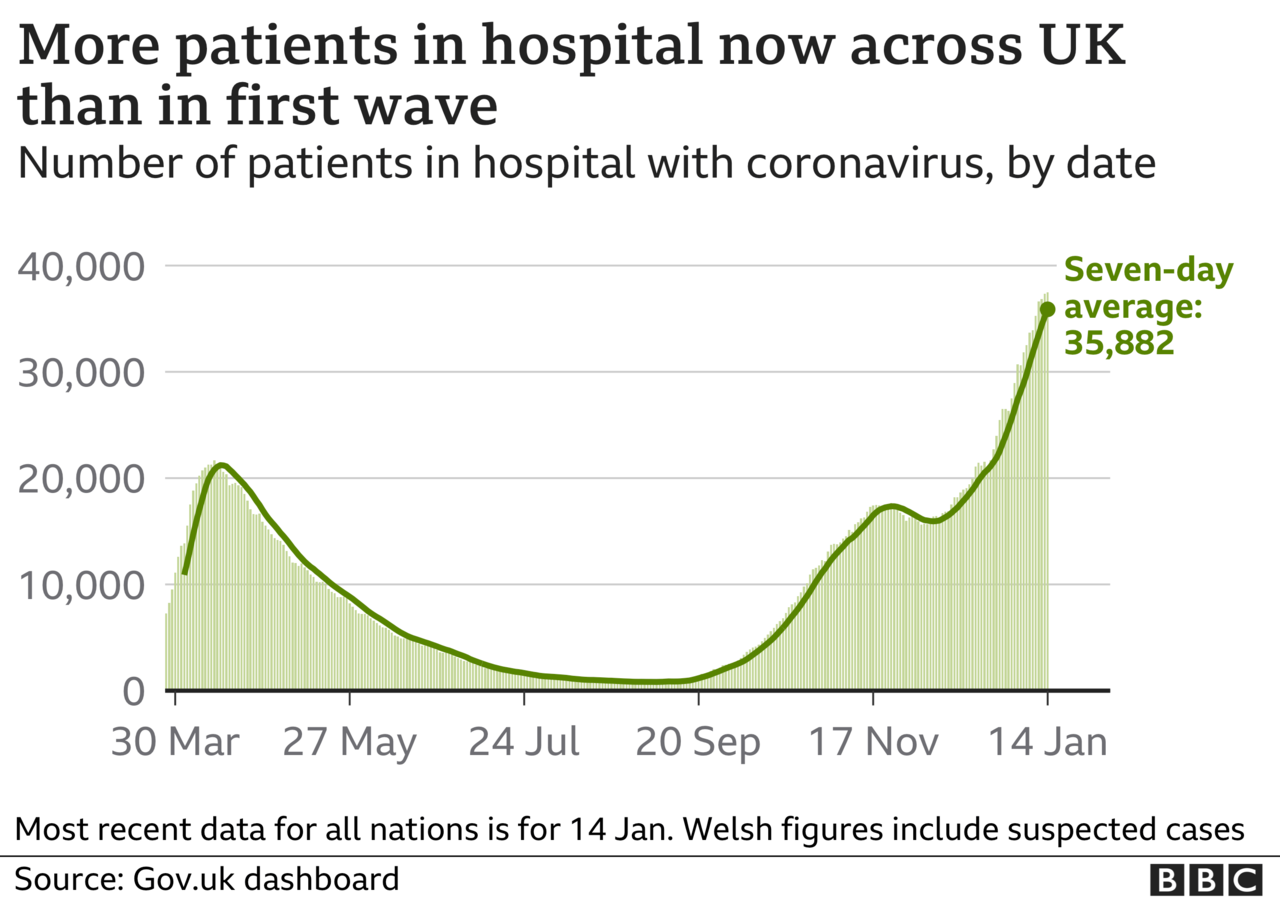