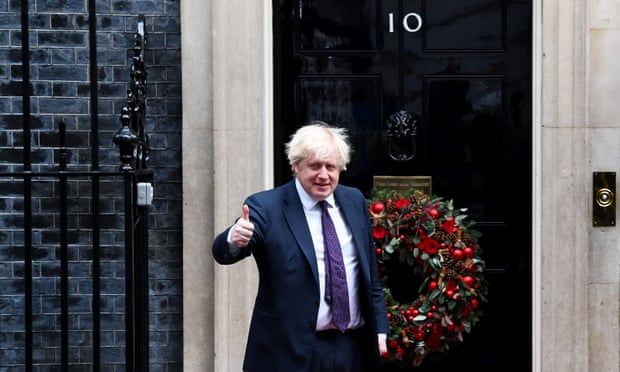 Cover-ups and credibility: Johnson’s denials no longer carry much weight

Analysis: perceived gulf between reality and No 10’s statements is making matters worse for government
It has come to the point where Boris Johnson and No 10’s denials that an event took place have diminishing credibility.

All the evidence points to a party having taken place in Downing Street on 18 December, when London was subject to restrictions on indoor gathering.

Testimony from many sources says No 10 staff held a party that day, with a Secret Santa, refreshments and games. A video has now emerged of aides joking about the gathering and its lack of social distancing.

But Johnson’s official spokesperson was adamant on Monday. “There was no Christmas party. Covid rules have been followed at all times.”

Johnson himself says he is “satisfied” that no rules were broken.

The same gulf between reality and No 10’s doublespeak is evident in the case of the rescue of Pen Farthing’s animals from Afghanistan.

A whistleblowing Foreign Office civil servant has given evidence that the prime minister was involved in ordering the dogs to be rescued instead of humans, potentially depriving people of life-saving spaces on a plane.

Johnson and No 10 were adamant the idea that he or his wife, Carrie Johnson, ordered that decision was “utter nonsense”.

But within hours a letter emerged from Johnson’s parliamentary private secretary, Trudy Harrison – his closest MP aide – giving Farthing authorisation to proceed with evacuation of his staff and animals.

And, as ever, it is the appearance of cover-ups that has made things worse for No 10, with people close to the events pushed to speak out by the sense of untruthfulness emanating from Downing Street.

The multiple leaks from within the civil service are also a sign that all is not well in Johnson’s administration, with deep discontent in Whitehall.

Even Johnson’s supporters would concede he has a chequered relationship with the truth, stretching back to his days as a young journalist during which he was sacked for fabricating a quote.

In 2004, Michael Howard sacked him from the shadow cabinet after he lied about an affair. Johnson reportedly told Howard: “It’s my private life. I have the right to lie about my private life.”

Since becoming prime minister, there have been a string of occasions on which Downing Street’s integrity has been challenged.

Among the many examples was the furore over whether the prime minister lied to the Queen about his reasons for proroguing parliament – an allegation which he denied.

Then came Johnson’s reported quote that he would rather “let the bodies pile high in their thousands” than order another lockdown. And while Downing Street insisted the allegation was untrue, many media outlets – BBC, ITV and Daily Mail – reported it all the same, citing sources who were allegedly in the room when the statement was made.

And there is Wallpapergate: the ongoing saga of who financed the £58,000 in lavish renovations to Johnson’s No 11 flat, with the prime minister accused of having been evasive over how the bill was paid. Johnson insisted he had stumped up – but it later emerged that money was loaned by the Conservative party and subsequently by the millionaire donor and Tory peer Lord Brownlow. The Electoral Commission is investigating.

Aides in Downing Street will now be agonising over whether this latest story about the Christmas party has the dreaded quality of “cut through” with the public. They believe the public is not that bothered about how the prime minister funded his flat, or whether he made a comment about Matt Hancock being “fucking hopeless”.

But, like the Barnard Castle affair, where Johnson’s aide Dominic Cummings was found to have gone on a drive during lockdown to test his eyesight, and Hancock’s resignation for having an affair when socialising was banned, this story seems to contain a strong element of hypocrisy.

It is the sense that the rules did not apply to Johnson and those around him, and their efforts to dupe the public about what really happened, that could leave an enduring sense of rancour.
#Boris Johnson  #Afghanistan  #Johnson  #Covid
Add Comment