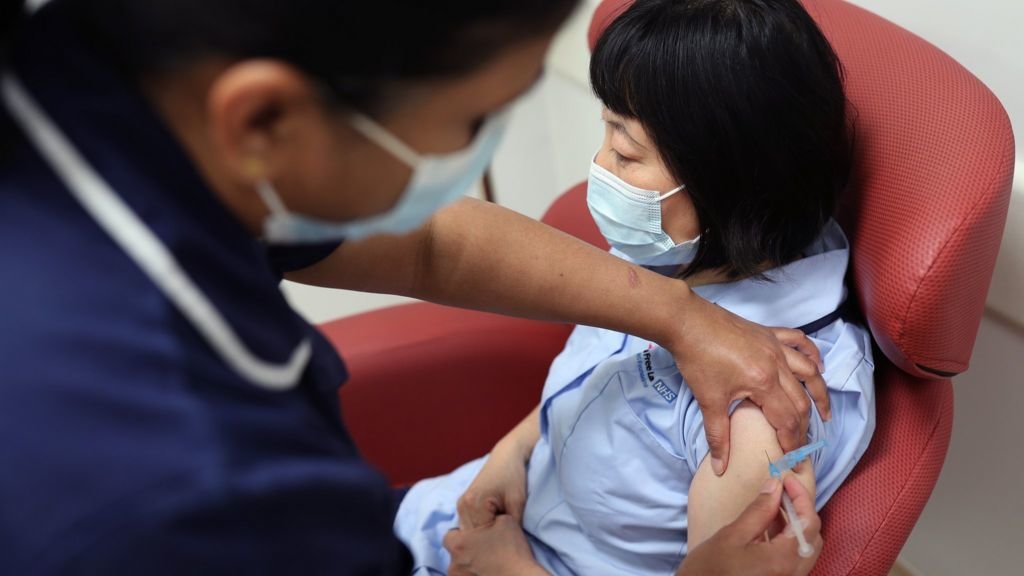 The first vaccinations will mark a "decisive turning point in the battle against coronavirus", NHS England's chief executive has said on the eve of the jab being rolled out.

People in the UK will begin to receive the Pfizer/BioNTech vaccine on Tuesday.

NHS England boss Sir Simon Stevens said vaccinations would continue "at least until next spring" and warned people to be "very careful" in the meantime.

Health Secretary Matt Hancock tweeted all parts of the UK had vaccine doses.

On Monday, the government announced a further 14,718 people had tested positive for the virus, while a further 189 people had died within 28 days of a positive test - taking the total by that measure to 61,434.

Front-line health staff, those aged over 80, and care home workers will be first in line for the vaccine.

In England, 50 hospitals have been initially chosen to serve as hubs for administering it.

Scotland, Wales, and Northern Ireland will also begin their vaccination programmes from hospitals on Tuesday.

Speaking at the Royal Free Hospital in London ahead of the Covid-19 vaccine rollout, Sir Simon said: "Tomorrow is the beginning of the biggest vaccination campaign in our history, building on successes from previous campaigns against conditions [and] diseases like polio, meningitis, and tuberculosis. 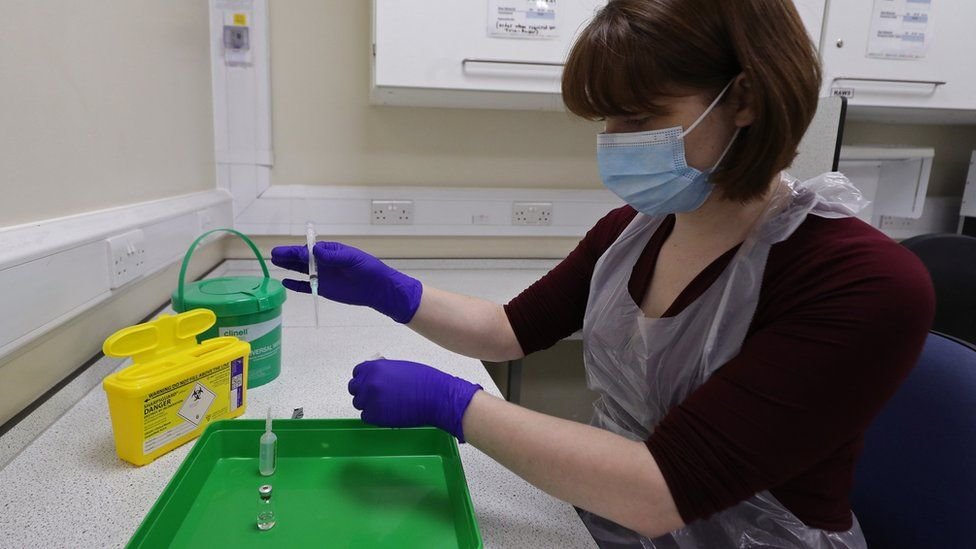 "Hospitals, and then GPs and pharmacists, as more vaccine becomes available, are going to be vaccinating at least until next spring."

Refrigerated containers holding the vaccine doses, which need to be kept at -70C, have been arriving in the UK from Belgium, where it is made, and are being prepared to be moved from secure locations to the hospitals.

The UK has ordered 40 million doses of the Pfizer/BioNTech jab. It is enough to vaccinate 20 million people because two doses are needed. 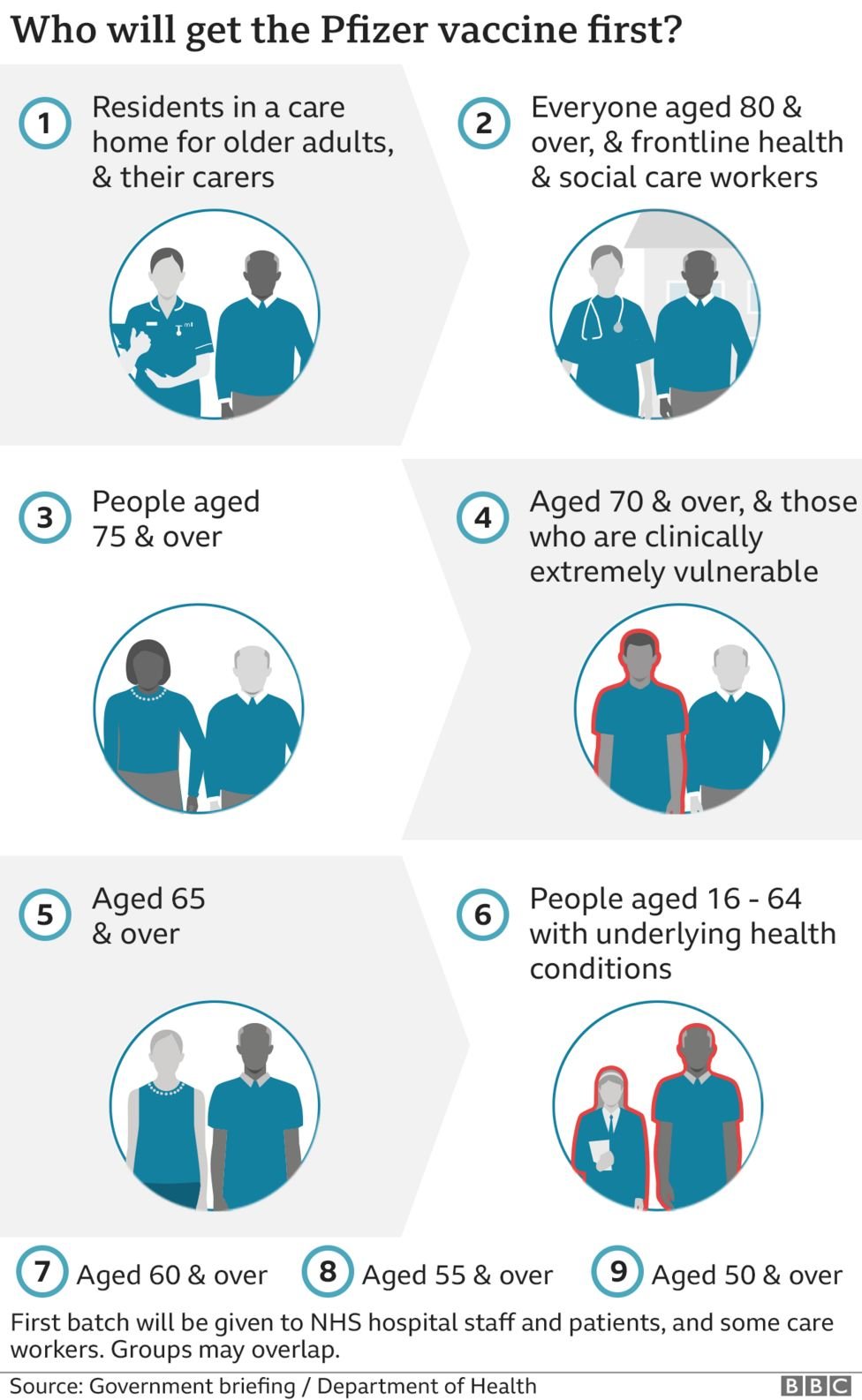 Although care home residents were placed at the top of the priority list agreed by the Joint Committee on Vaccination and Immunisation (JCVI), they are not getting the very first vaccinations.

The government has explained this is because the chosen hospital hubs already have the facilities to store the vaccine at the required temperature. But Mr Hancock said the government was doing everything it could to overcome "significant challenges" to ensure care home residents were vaccinated as soon as possible.

Chris Hopson, chief executive of NHS Providers, said people aged over 80 should not be worried if they are not called for the vaccine this month as the vast majority will have to wait until the new year to receive the jab.

When asked about potential disruption to supply if there is a no-deal Brexit, Foreign Office minister James Cleverly said the vaccine was a "top priority product" and the government would consider using the armed forces to ensure supply "if we need to".

The Ministry of Defence said 60 military planners are working with the government's vaccine task force, with a further 56 personnel helping to construct vaccination centres.

But for medication like the Covid vaccine, which could become ineffective if it was delayed, "the UK government have made arrangements to fly those into different parts of the UK," he said.

NHS chief Sir Simon Stevens: This could be a "decisive turning point" in Covid-19 fight