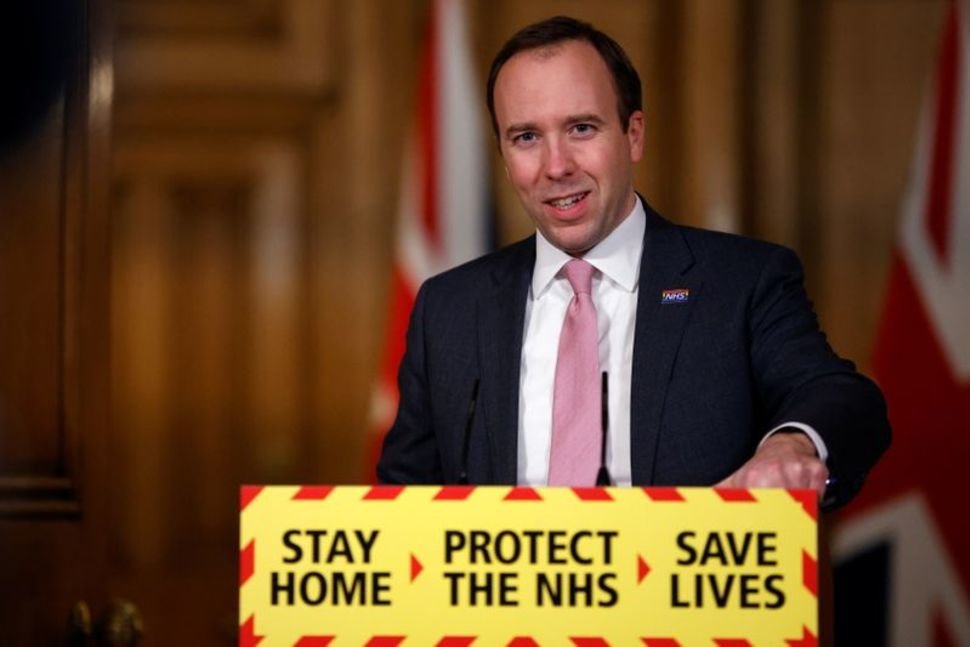 Coronavirus: UK must 'come down hard' on South African variant

The UK must "come down hard" on the South African coronavirus variant, the health secretary has said, after cases with no links to travel were detected.

About 80,000 people in England will be offered urgent tests for the variant.

Residents aged 16 and over in eight areas across Surrey, London, Kent, Hertfordshire, Southport and Walsall are being asked to take tests, regardless of symptoms.

Previous cases in the UK were connected to South Africa.

But random checks found 11 cases that could not be linked to international travel.

Matt Hancock told a Downing Street news conference on Monday that there was "currently no evidence" to suggest the South African variant was "any more severe, but we need to come down on it hard, and we will".

Mobile testing units and home kits are being sent to the following neighbourhoods:

Appealing to residents of these postcodes, Mr Hancock said: "It is imperative that you stay at home, and that you get a test, even if you don't have symptoms.

"This is so important so that we can break the chains of the transmission of this new variant, and we've got to bring this virus to heel."

Dr Susan Hopkins, of Public Health England, told the same briefing that three of the vaccines that had been used in trials had proven effective against the South African variant.

She said officials expected other vaccines to have "a similar level of effectiveness, particularly in reducing hospitalisation and death".

Dr Hopkins added that further testing was taking place involving the South African variant so that predictions could be made with "greater robustness".

Prof Jim McManus, the director of public health for Hertfordshire, told the BBC that if every single case was detected, it might be "possible" to eradicate the variant within two weeks.

Asked how confident the government was that the new variant could be contained, Mr Hancock warned it was "not straightforward... there may be further cases we don't know about yet".

He added it was "absolutely vital" that people in the affected areas "minimise all social contact and get a test when the opportunity arises".

Why have 11 cases caused such alarm? It is because of the precarious position we are in currently.

Vaccination is being rolled out quickly and many vulnerable people are building up immunity.

Anything that interferes with that at this point will have significant consequences. But once vaccination is complete and there are significant levels of immunity across the population, the impact of mutations becomes much more diluted.

This is why there needs to be maximum vigilance now, but in the long-term we can still be confident we can get on top of this pandemic.

Viruses mutate, so what is happening is not surprising.

But coronaviruses - certainly compared to the flu which sees different strains circulating every year - tend to be relatively stable.

So that means, even with the mutations we are seeing, the vaccines that have been developed still offer a very good degree of protection, even if that protection is not quite as high as it was against the original form of the virus.

What is more, it is relatively straightforward with this generation of vaccines to re-engineer them to work better against the mutations that have been seen.

Almost 9.3 million people in the UK have now received a first dose of a coronavirus vaccine, according to the latest government figures.

Meanwhile, a further 18,607 new infections were recorded in the UK as of Monday, as well as another 406 deaths within 28 days of a positive test.

In total, 105 cases of the South African variant have been identified - with all but 11 linked to travel in South Africa.

Mr Hancock said testers would be going door-to-door in the areas being targeted for surge testing.

Kent County Council said police would be among those going door-to-door to offer residents in the ME15 area tests "there and then".

In Hertfordshire, residents in the EN10 area will receive a letter offering tests at mobile screening units, to collect at a local library, or through the post, the county council said.

Positive cases will be analysed to see if they are caused by the South African variant.

Public Health England has already been analysing around 5% to 10% of all positive cases in more detail, allowing it to identify new variants in the community. 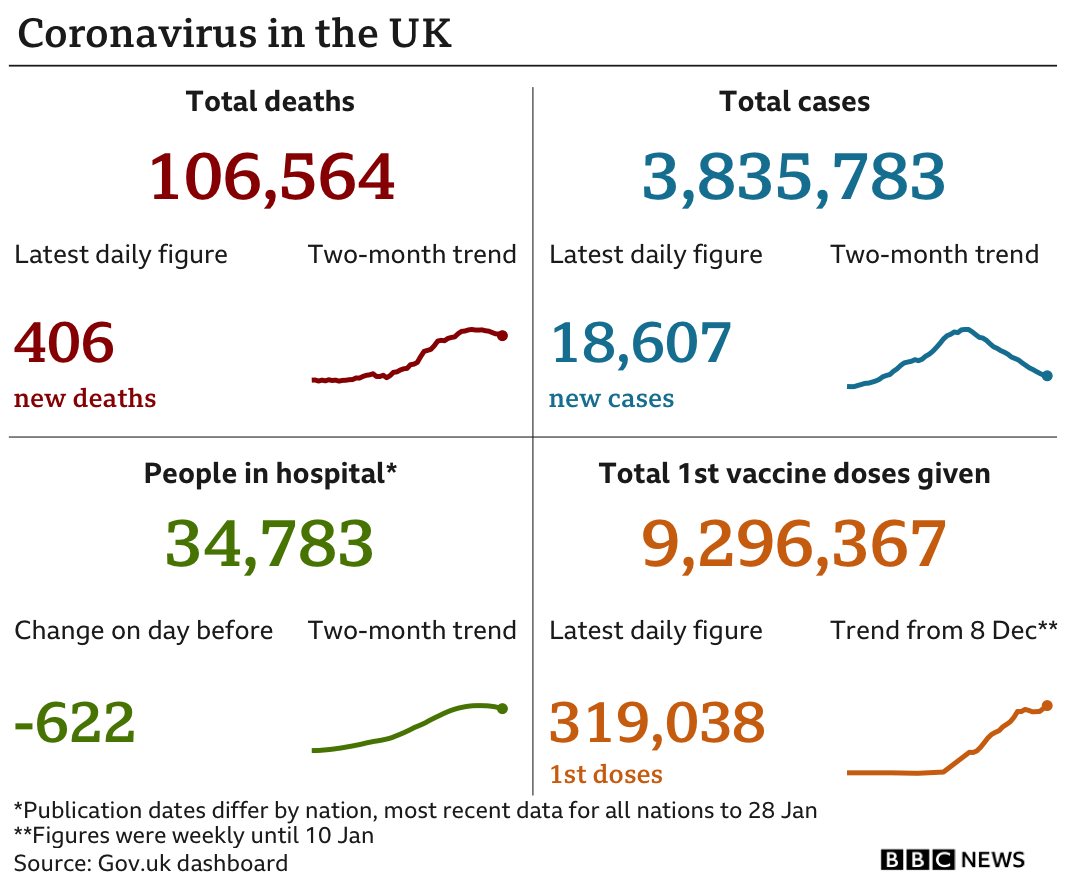 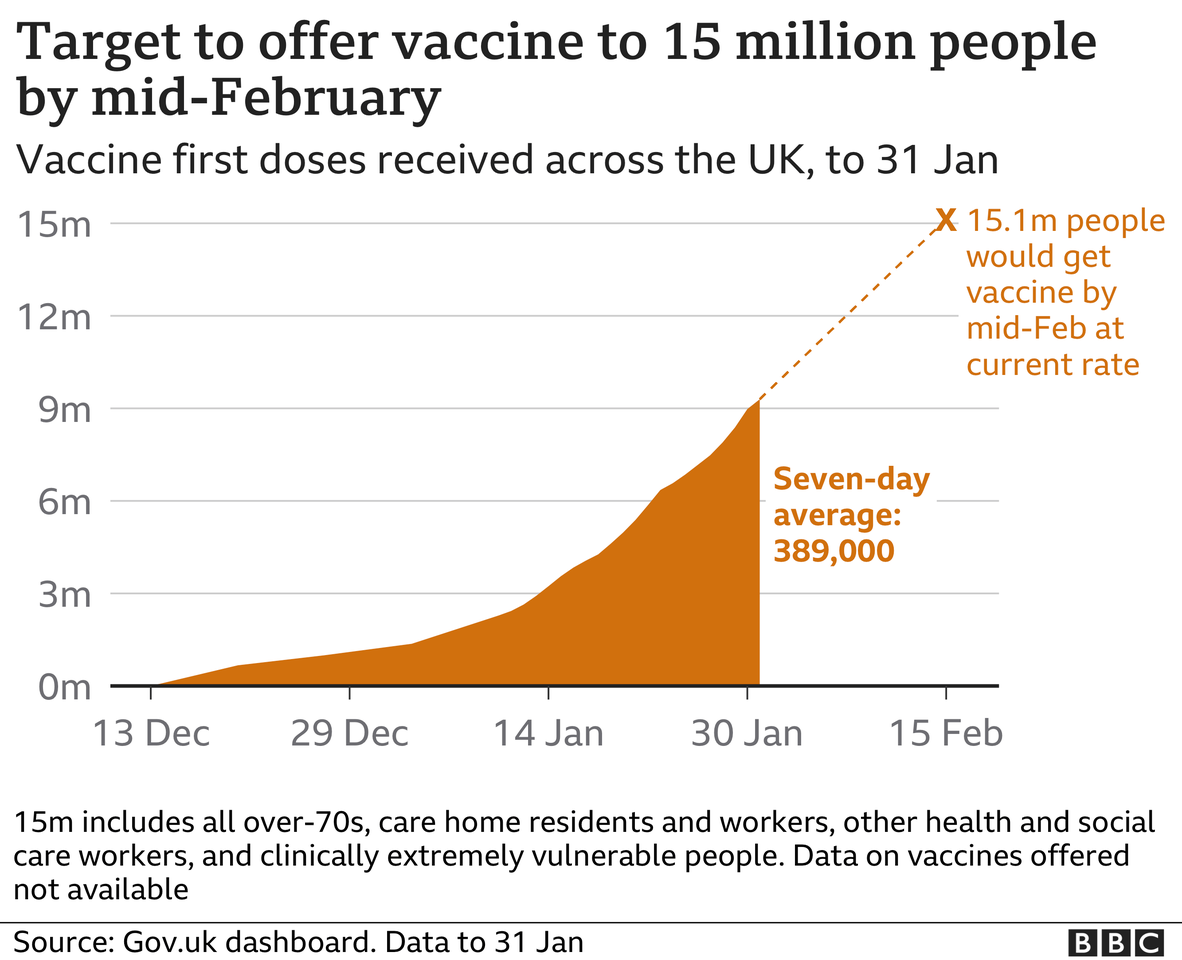 "The fact is we are going to be living with Covid for a while to come in one way or another," Mr Johnson said.

Studies are under way into how the vaccines work against the new variants, with some early results suggesting the Pfizer jab protects against them.

Data on two new vaccines that could be approved soon - one from Novavax and another from Janssen - show that they appear to offer some protection against the variant. Meanwhile, early results from Moderna suggest its vaccine is still effective against the South Africa variant.

*  The NHS announced a "significant milestone", saying that a Covid vaccine has now been offered to all older residents at eligible care homes in England

*  The UK has ordered an extra 40 million doses of a vaccine from the French pharmaceutical company Valneva, that should become available later in the year and into 2022