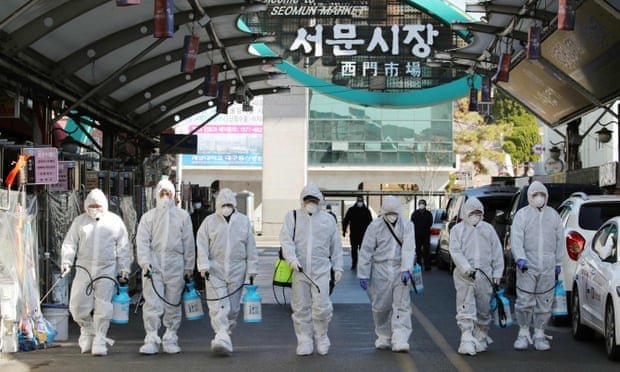 Authorities place more than 9,000 Shincheonji church members in self-quarantine
South Korea’s president Moon Jae-in has placed the country on “red alert” after it reported its fifth death and more than 123 new coronavirus cases, taking the total number of infected to 556.

As the nation struggled on Sunday to contain the deadly Covid-19 outbreak in the city of Daegu, the president described the coming days as “a very important moment”, the news agency Yonhap said.

The government would bolster its fight against the virus by raising the alert level one notch to the highest of “red”, he told an emergency meeting of agencies in Seoul on Sunday.

The president said the government and the local authorities should not hesitate to take “unprecedented powerful” measures to contain the viral disease without being limited by “regulations”.

Of the 123 new cases, 75 are related to the Shincheonji church in the country’s fourth-largest city of Daegu and a neighbouring hospital.

The Korea Centers for Disease Control and Prevention said it has placed more than 9,000 Shincheonji members in self-quarantine and thousands of worshippers have been screened for the virus.

It came as a Japanese government minister apologised after a woman allowed to leave the coronavirus-hit cruise ship Diamond Princess on Wednesday tested positive for the infection on Saturday, raising more questions about the country’s management of the outbreak.

In South Korea, the government has tried to contain the outbreak by declaring Daegu and its adjacent county Cheongdo “special care zones”. But that did not stop the number of infections more than doubling in a single day on Saturday.

The number of people being checked for the virus and under quarantine came to 6,039 on Sunday morning, the KCDC said. The country has tested 22,633 suspected cases; 16,038 tested negative.

South Korea confirmed its first new coronavirus case from a Chinese woman from Wuhan, the epicentre of the virus outbreak, on 20 January.

In a rare public message on Saturday night, the prime minister, Chung Sye-kyun, reassured people that the virus could be contained if the public cooperated with the government’s instructions.

On Sunday Daegu’s mayor, Kwon Young-jin, advised locals to stay indoors and said: “The crisis level of Daegu and the North Gyeongsang province is grave.”

He asked all Shincheonji members with symptoms to come forward and be tested.

“Hiding is not the answer,” he said. “If you hide, it could hurt your health, your family’s health, and will not help in the early cessation of the situation.”

China’s death toll from the virus rose to 2,442 on Sunday after the government said 97 more people had died, all but one in the epicentre of Hubei province.

Most of the deaths and new infections were in Hubei’s provincial capital, Wuhan, where the virus first emerged in December.

The coronavirus has spread to more than 25 countries and is causing mounting alarm due to outbreaks in Europe, the Middle East, and Asia.

China’s numbers of daily new infections are well down from the outbreak’s early height. But China has sowed confusion about the data by repeatedly changing its counting methods.

On Saturday the US state department raised its travel advisory to South Korea.

US citizens were asked to “exercise increased caution” when travelling to South Korea, where “sustained community spread” has been reported.

“Sustained community spread means that people in South Korea have been infected with the virus, but how or where they became infected is not known, and the spread is ongoing,” the department said on its website.

The US Centers for Disease Control and Prevention also issued an “alert level 2” travel notice, saying “older adults and those with chronic medical conditions should consider postponing nonessential travel”.

Britain has also advised its nationals “against all but essential travel to Daegu and Cheongdo”, and Israel refused to allow non-Israelis to disembark from a plane that departed from South Korea on Saturday.
Add Comment