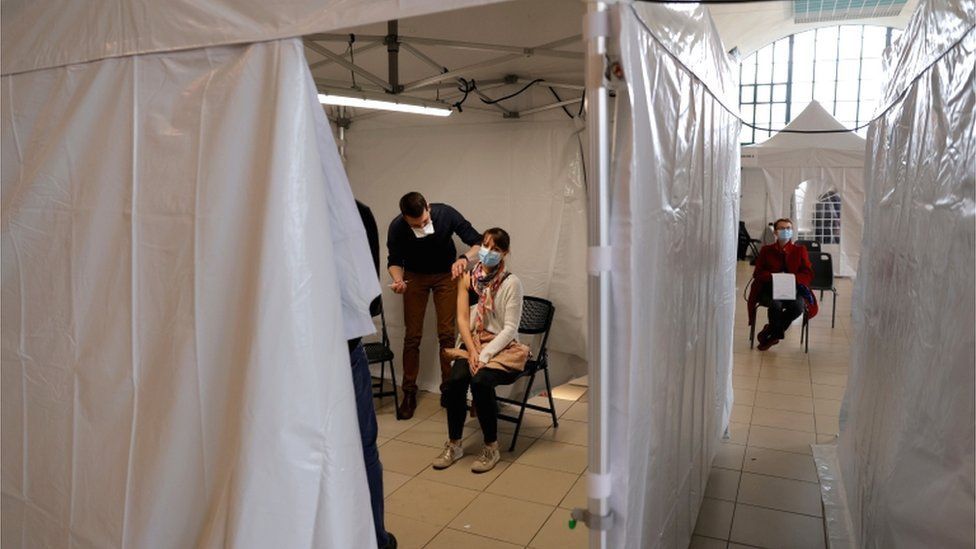 France has accused the UK of "blackmail" over its handling of coronavirus vaccine exports, amid continuing tensions over supply chains.

Foreign Minister Jean-Yves Le Drian was asked whether the EU had been "scammed" by sending millions of doses to the UK while its own rollout stuttered.

"We need to build a co-operative relationship," he told France Info radio. "But we cannot deal this way."

France has called for the EU to implement tougher export controls.

Vaccine rollouts have started sluggishly across the bloc, and the EU has blamed pharmaceutical companies - primarily AstraZeneca - for not delivering its promised doses. AstraZeneca has denied that it is failing to honour its contract.

The EU is expecting to receive about 30 million AstraZeneca doses by the end of March, less than a third of what it was hoping for.

The UK's vaccination drive, meanwhile, has so far been more successful than that of the EU's 27 member states.
On Thursday, following a virtual summit where EU leaders discussed vaccine supplies, European Commission President Ursula von der Leyen said the bloc was the "region that exports most vaccines worldwide" and invited other countries to "match our openness".

She also said AstraZeneca must "catch up" on its deliveries to the EU before exporting doses elsewhere. 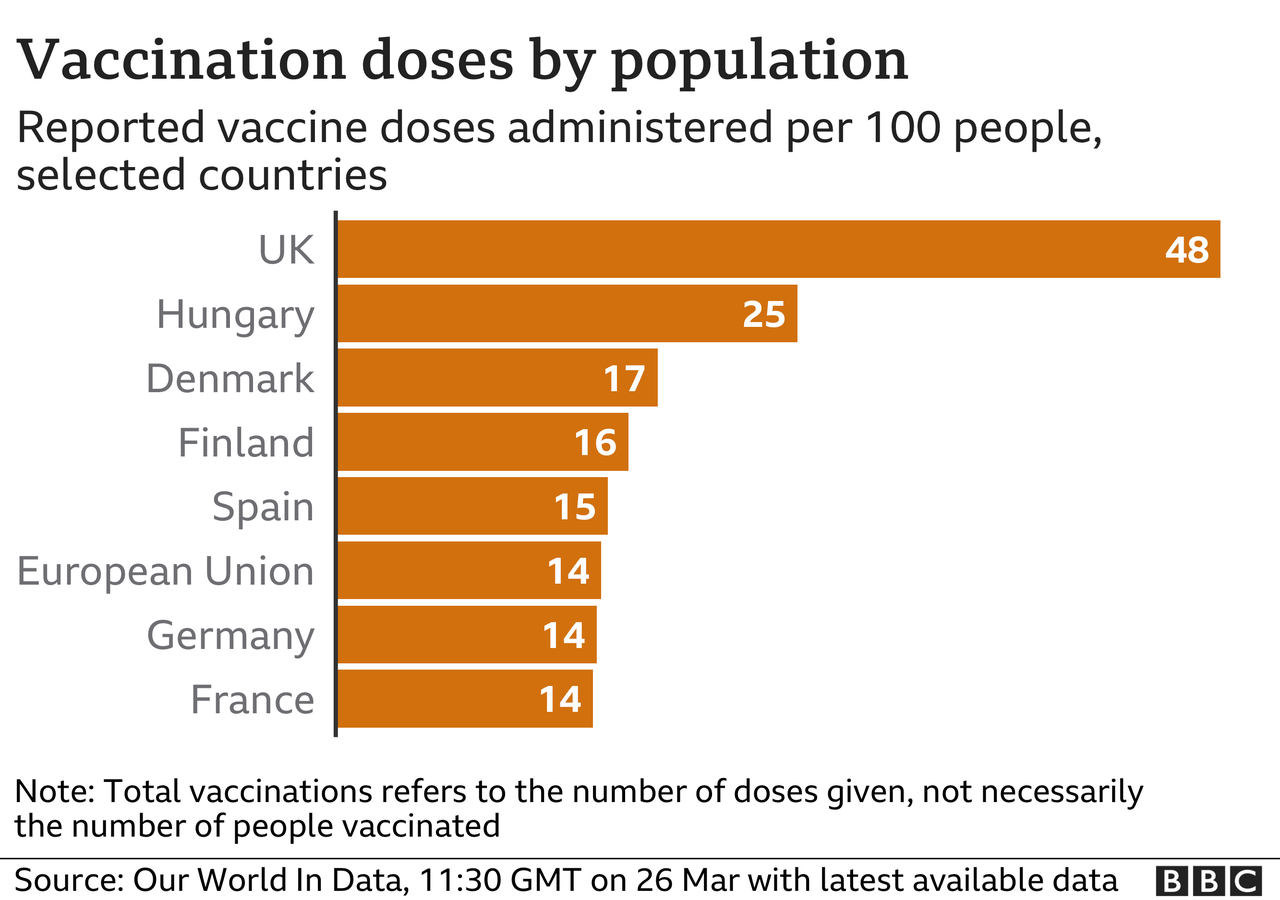 What has France said?

On Friday, Mr Le Drian said the EU "shouldn't be paying the price" for the UK's vaccination policy.

He also criticised its approach to purchasing jabs, claiming the UK would struggle to source and supply second shots.

"The United Kingdom has taken great pride in vaccinating well with the first dose except they have a problem with the second dose," he said.

"One can't play with blackmail," he added. "You can't be playing like this."

The foreign minister did not specify what he considered to be blackmail, but earlier this week UK Prime Minister Boris Johnson warned that strict EU export controls could negatively hit investment in member states.

"I would just gently point out to anybody considering a blockade... that companies may look at such actions and draw conclusions about whether or not it is sensible to make future investments," he said. 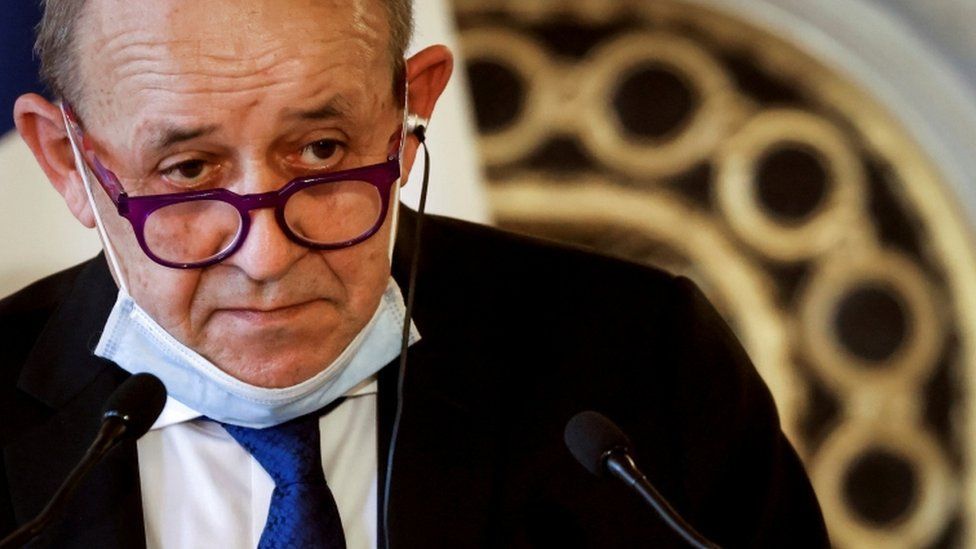 Mr Le Drian is not the only senior French figure to have called for tighter controls on doses sent from the EU.

President Emmanuel Macron told reporters on Thursday that the virtual summit marked "the end of naivety" from the bloc. "I support the fact that we must block all exports for as long as some drug companies don't respect their commitments," he said.

"AstraZeneca has been an issue," he said. "I just remind you that we were expecting to have 120 million doses... and finally we got 30 million. So we had a problem with this company."

What happened at the EU summit?

But they stopped short of a banning exports altogether, and a a post-summit statement emphasised the importance of maintaining the global supply chains needed to produce vaccines.

President Ursula von der Leyen, however, voiced frustration at AstraZeneca and threatened to block exports from the UK-Swedish company until it delivered its promised doses to the EU.

"The company has to catch up, [it] has to honour the contract it has with European member states, before it can engage again in exporting vaccines," she said.

Elements of the AstraZeneca vaccination are manufactured in a number of EU states.

Dutch Prime Minister Mark Rutte said while his fellow leaders had found the Commission's tougher export measures "acceptable", he hoped they would never be used - a message echoed by his Belgian counterpart, Alexander De Croo.

Member states also agreed to try and ramp up the production of vaccines within the bloc. They called on manufacturers to "ensure predictability of their vaccine production and respect contractual delivery deadlines".
How bad is coronavirus in Europe?

A third wave of infections is sweeping across much of mainland Europe.

Yet recent figures show just 12.9 doses of vaccine have been administered per 100 people in the EU compared with 44.7 in the UK and 37.2 in the US. 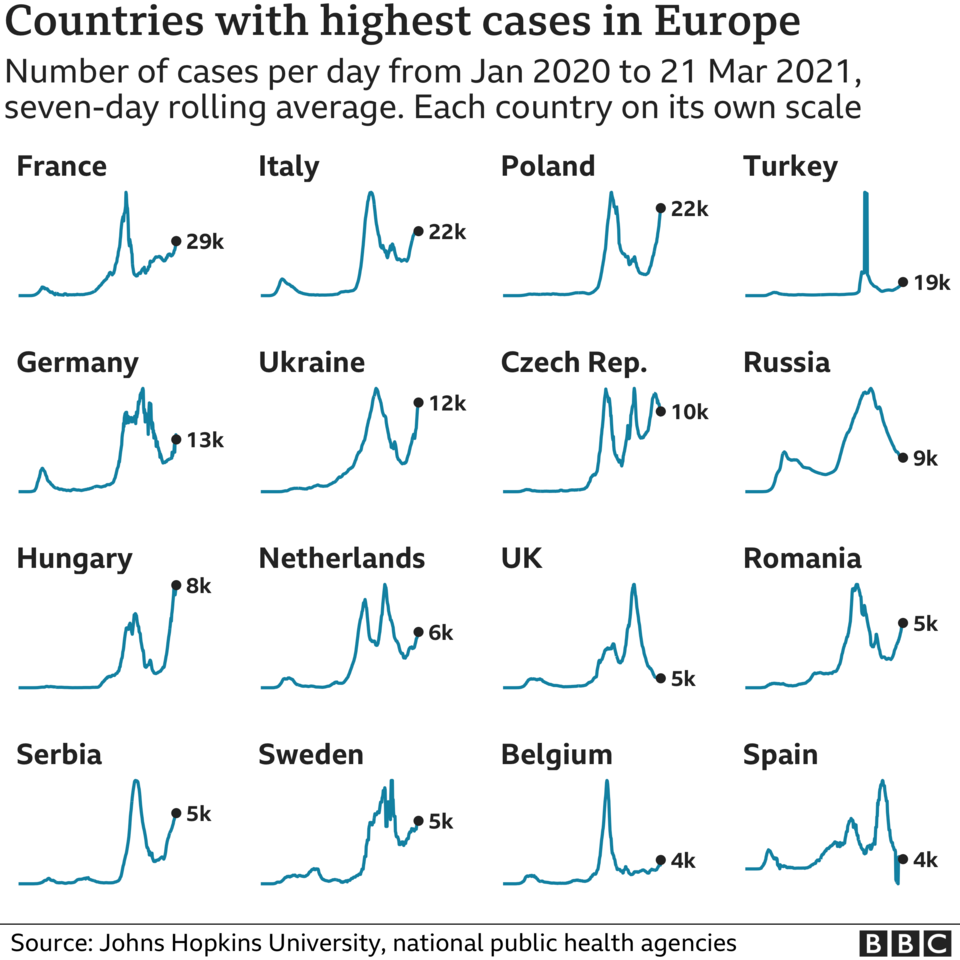 France's Health Minister Olivier Véran said 400,000 people had been vaccinated on Friday, which is just under the UK's daily average. The country is hoping to step-up its vaccination programme in the coming weeks.

Also on Friday, Europe's medicines regulator approved three factories for the production of coronavirus vaccines. A site in the Netherlands was cleared to produce the Oxford-AstraZeneca jab, while a German factory was given the go-ahead to make Pfizer/BioNTech doses.

A manufacturing site for the Moderna jab in Switzerland was also approved.

Speaking earlier this week, German Chancellor Angela Merkel said the British variant had become the dominant strain circulating in Germany and amounted to "a new pandemic".

"The situation is serious," she said. "Case numbers are rising exponentially and intensive care beds are filling up again."

Lockdowns have been re-imposed or extended in countries like Belgium or the Netherlands but there is particular concern over eastern EU states.

Poland will close nurseries, pre-schools and hairdressers for two weeks from Saturday after coronavirus cases surged.