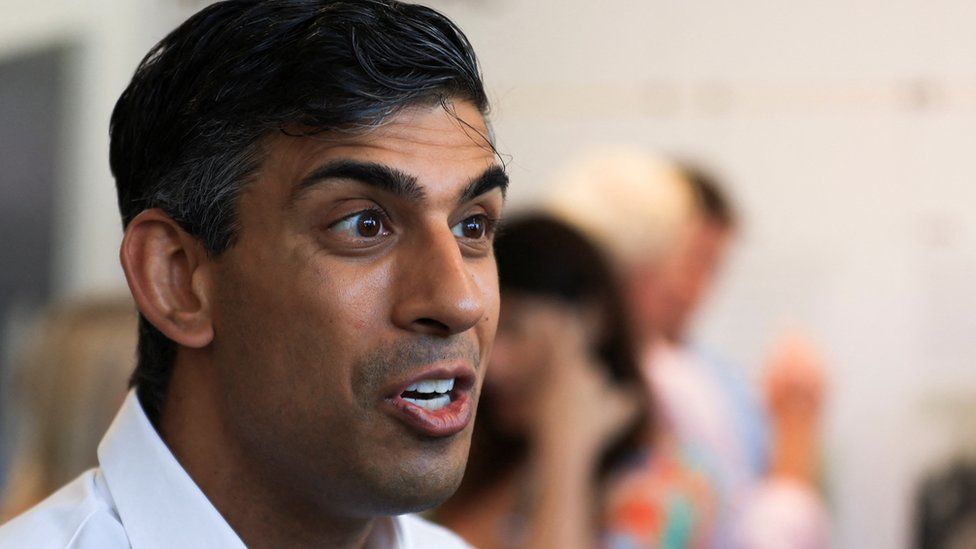 Rishi Sunak has said he will "get a grip of inflation" before cutting tax, if he becomes prime minister.

The former chancellor - who resigned last week after losing faith in Boris Johnson - said inflation was the "number one economic priority".

"Once we've done that, I will deliver tax cuts," he said.

Meanwhile, Penny Mordaunt - who remains the bookies' favourite to be new PM - has defended her record as a minister, after criticism from rival camps.

"Look at my record, look at what I've done," Ms Mordaunt told the Daily Telegraph. "I do get stuff done."

Tory MPs will whittle the candidates down to two in votes next week, before party members choose the winner.

Mr Sunak was speaking on a visit to Teesside, the day after the five candidates had their first TV debate.

"I think the number one economic priority we face as a country is inflation," he told the media on his visit.

"Once we've done that, I will deliver tax cuts."

Tax is one of the main dividing lines between the leadership candidates, with some - such as Ms Truss and Ms Mordaunt - promising immediate cuts.

Critics say the plans would cost more than £30bn a year - and at Friday's debate Mr Sunak said "borrowing your way out of inflation isn't a plan, it's a fairy tale".

The rate of inflation - which measures how quickly prices are rising - is currently 9.1%, and the Bank of England has warned it could rise further.

Ms Mordaunt, meanwhile, has insisted she does "get stuff done" after criticism of her record.

Lord Frost - who worked with Ms Mordaunt when he negotiated the UK's exit from the EU - said he "would have grave reservations" about her as prime minister.

"I'm sorry to say this, she did not master the necessary detail in the negotiations last year," Lord Frost told Talk TV on Thursday.

But Ms Mordaunt - who has held a number of positions in government, including a brief spell as defence secretary - defended her record.

"Look at my record, look at what I've done," she told the Telegraph.

"The first job that I had in government, I managed to bring the firefighters' dispute, pensions dispute and strikes to an end. Other ministers didn't...

"People look at my record and people will have seen me at the dispatch box and people know who I am.

Although Ms Mordaunt remains favourite with the bookmakers, a poll for the Sunday Telegraph suggested that - of those who had heard of all five candidates - Mr Sunak had the highest approval rating among Tory voters.

During Friday's debate, Ms Mordaunt was challenged on her record on gender self-identification for trans people.

She said that, while she was equalities minister, she had begun a consultation of the Gender Recognition Act but had not been in favour of self-identification - people being able to change gender legally without, for example, medical diagnosis.
But Ms

Badenoch said when she became a junior equalities minister in 2020, self-ID "was being pushed" - and her understanding was that Ms Mordaunt had pushed for it.

Ms Mordaunt replied: "That is not correct and this will all be on record in government."

On Saturday, Mr Sunak was asked for his views on gender identity. He said that, as a father of two young girls, he wanted to make sure "women's rights are protected - whether that's in sports, in changing rooms, or in language".

"But of course I respect everyone's freedom to love who they want and live as they live," he added.

WATCH: I don't see myself as a socialist chancellor - Sunak