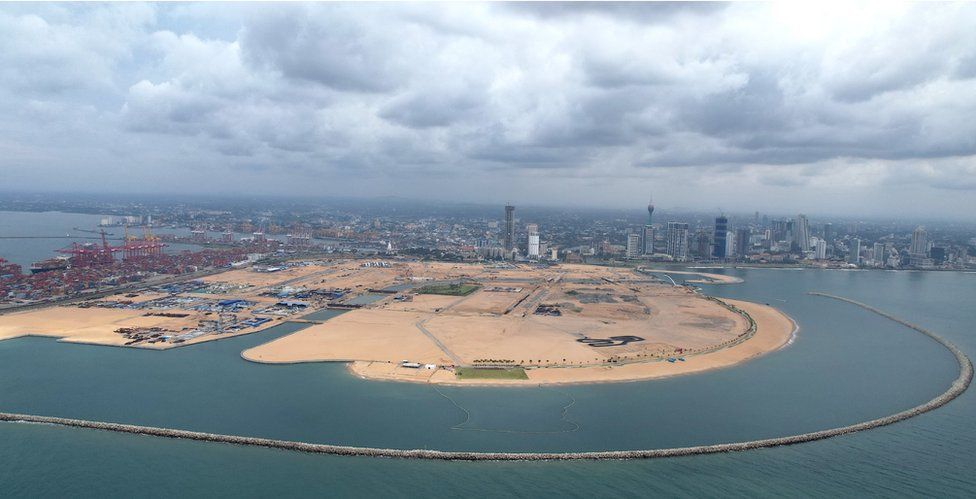 Colombo Port City: A new Dubai or a Chinese enclave?

"An economic game changer" is how officials describe Colombo Port City, a shiny metropolis soaring out of the water along the Sri Lankan capital's seafront.

Next to Colombo's leafy business district, the huge expanse of sand reclaimed from the sea is being transformed into a high-tech city which will host an offshore international financial centre, residential areas and a marina - prompting comparisons with Dubai, Monaco or Hong Kong.

"This reclaimed land gives Sri Lanka a chance to redraw the map and to build a city of world class proportions and functionality - and compete with Dubai or Singapore," Saliya Wickramasuriya, a member of the Colombo Port City Economic Commission, told the BBC.

But critics question how much of an economic game changer it will really be for Sri Lanka.

After several years of dredging, construction activity is gaining momentum and the new city is taking shape.

Huge cranes supervised by Chinese engineers are moving concrete slabs, while earth movers fill trucks with tonnes of sand. A river passing through the reclaimed land has already been dredged, allowing access for small boats and yachts.

Officials estimate it will take about 25 years to complete the project, the first of its kind in South Asia.

Sri Lanka says the land under its control and the area given to the Chinese will be leased to multinational firms, banks and other companies. The government may also charge a levy on their revenue.

About 80,000 people are expected to live in the new city, which will offer tax holidays for those who invest and do business there. All transactions in the special economic zone, including salaries, will be in US dollars.

The Port City project was officially unveiled during Chinese President Xi Jinping's visit to Colombo in 2014, a year after he launched his Belt and Road Initiative - an ambitious plan to build road, rail and maritime infrastructure links across Asia and Europe to boost trade.

Sri Lanka turned to China for financial help to rebuild after a long war with Tamil separatists ended in 2009. Western nations had raised concerns over human rights abuses. 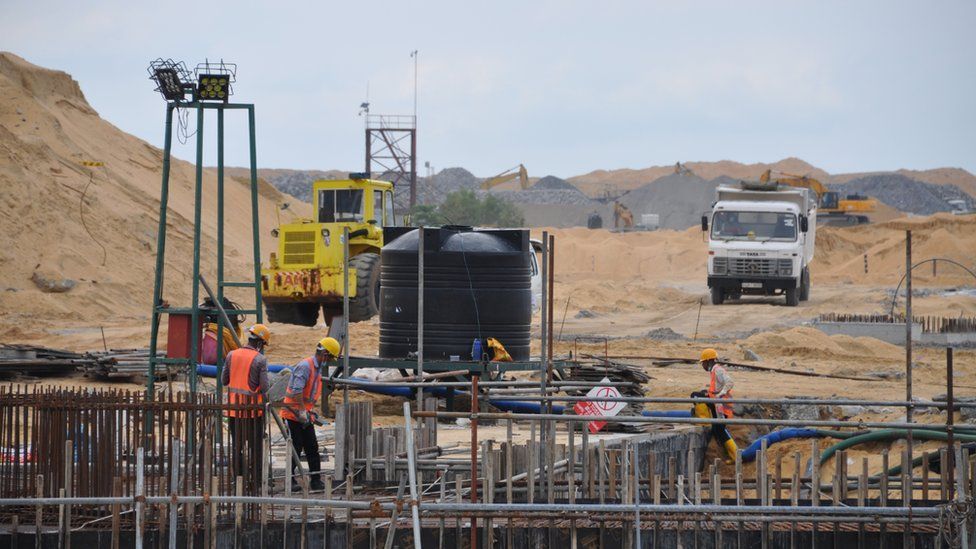 At the time of the Xi Jinping visit, Mahinda Rajapaksa was Sri Lanka's president but he lost elections later that year, with concern over Chinese loans - in particular for a vast port in the south at Hambantota - one of the issues on voters' minds.

Eight years later, and Mr Rajapaksa is now back in power, as prime minister, with his younger brother Gotabaya as president.

But Hambantota port is no longer in Sri Lanka's hand. Under the last government in 2017, Sri Lanka handed it over to Chinese control after struggling to pay off the debt to Chinese firms, with some of the money earned reportedly being used to pay off other debts.

So perhaps it is not surprising that not everyone in Sri Lanka shares the enthusiasm Port City officials have for the project.

Concerns over the scheme are numerous, and include the environmental impact of a project of this size.

Others fear the benefits of such a development will not benefit the country as much as supporters suggest it will.

"One potential negative around the Port City is the fact there are very significant tax holidays that are built into its law. There's a possibility of up to 40 years' worth of tax holidays for some investors," Deshal de Mel, an economist with Verite' Research, said.

"Having this large tax concession does not enhance Sri Lanka's overall revenue proposition."

The tax regime has triggered other worries. The US has warned that the relaxed business environment could become a haven for money launderers.

"There's no way that can happen because the normal criminal law applies here. We have our money laundering act and we have our financial intelligence unit. So, with all those things there is no way that somebody can get out of it," he told the BBC.

With China increasingly assertive on the global stage, there are also concerns over its long-term strategic ambitions.

The growing Chinese footprint in Sri Lanka is a worry for India in what has traditionally been seen as its back yard.

The Port City aims to lure away multinational firms and investors already based in India, which could dent investments and job opportunities there. 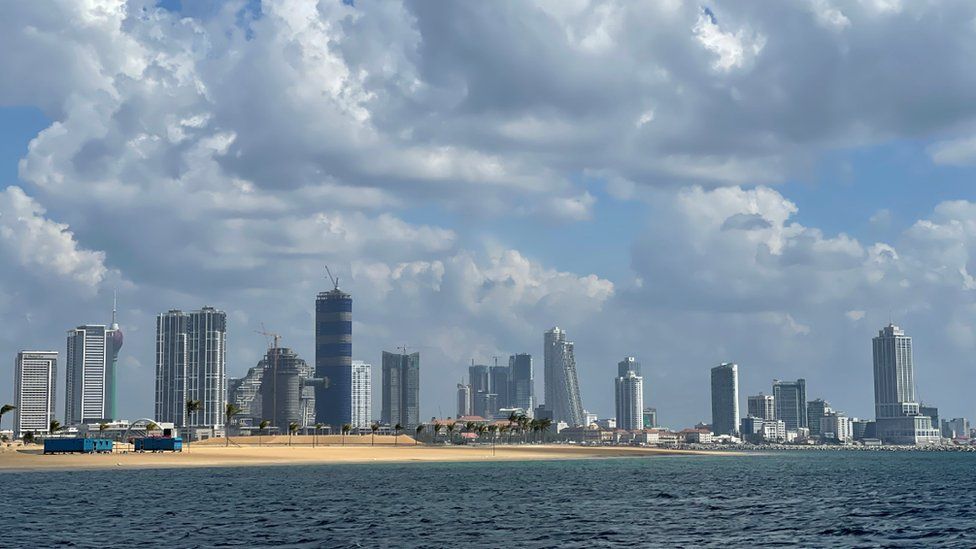 The new city will change the Sri Lankan economy forever

But some say Sri Lanka also has much to fear from Colombo Port City.

In 2020, Laos avoided bankruptcy only by selling part of its energy grid to China to help fund a railway linking the two countries.

As with Hambantota, could Colombo Port City end up becoming a Chinese outpost in the long run?

"At the moment the way this government has agreed to the Chinese, China has taken over as much as everything in the Port City, the whole thing," opposition MP Rajitha Senaratne told the BBC.

"One day, actually Sri Lanka won't have any say in this project."

Chinese academic Zhou Bo disagrees, saying the aim is for both countries to benefit.

"China's Belt and Road Initiative is not a charity. We also want to be mutually beneficial. That means we also want our investments to have economic returns," Mr Zhou, a former People's Liberation Army senior colonel who's now with Tsinghua University in Beijing, told the BBC.

"China has no intention to trap any country into debt."

"The entire area is under Sri Lankan sovereign control. The right to patrol, police, immigration and other national security duties lie with the Sri Lankan government," said Saliya Wickramasuriya, of the Port City Economic Commission. 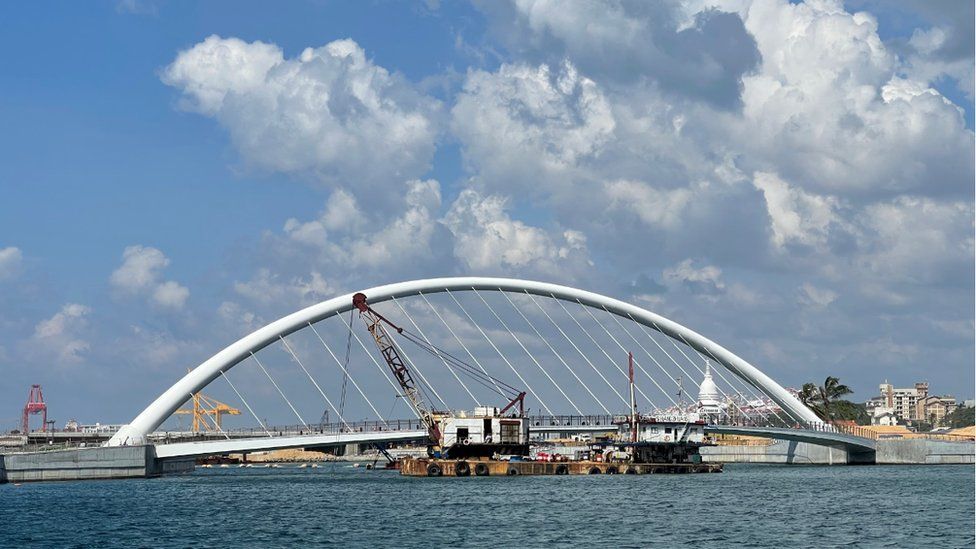 The project is not expected to be finished until the 2040s

But Sri Lanka, currently going through an unprecedented economic crisis, has limited options.

The country's external debts have surged to more than $45bn and it owes around $8bn to China alone.

But with repeated downgrades by international ratings agencies, Colombo's chances of going to international investors for further loans appear slim.

Only China has long-term ambitions - and deep pockets.

But there could be strings attached - some believe a city like Hong Kong in Sri Lanka would help China tighten its grip in this part of Asia in the years ahead.