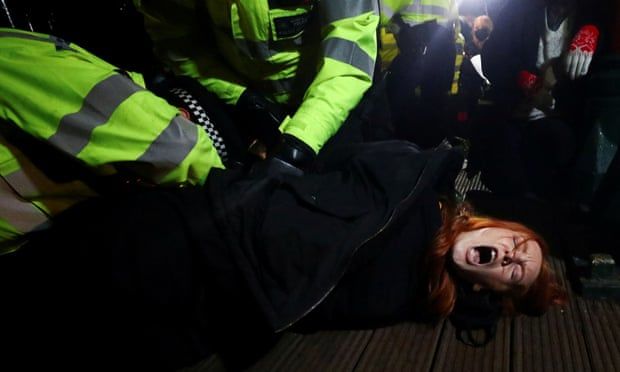 HM Inspector of Constabulary Matthew Parr claims that he faced discrimination for being a white man
The investigator helping coordinate the official inquiry into the Metropolitan police’s handling of the Sarah Everard vigil and concerns over women’s safety is suing the Home Office for sex discrimination over claims that he has been penalised for being a “white man”, the Observer can reveal.

Matthew Parr, one of five HM Inspectors of Constabulary who oversee UK police forces, is involved in shaping the inquiry into why officers manhandled women at the vigil where hundreds had gathered to call for safer streets and an end to “misogynistic” policing. However, Parr is also currently suing the government for sex and race discrimination after learning a black female colleague was being paid more.

Recently Parr told an employment tribunal that he believed his “race and sex had a clear influence” on the decision to pay him less, which the Home Office denies.

Following last weekend’s vigil, the home secretary Priti Patel ordered the policing inspectorate to carry out an independent inquiry and report back within two weeks.

Parr, who is an inspector of several police forces including the Met, has been involved in meetings regarding the vigil investigation.

It has been reported that Parr is leading the inquiry, but when the Observer asked the Home Office about Parr’s sex discrimination case, it said that despite the inquiry being half complete, it had not yet “100%” decided on its lead investigator following discussions over “whether a woman should front it because it’s around women’s safety”.

The report’s conclusion could intensify pressure on the force’s commissioner, Cressida Dick, who so far has resisted calls to resign amid widespread outrage over officers’ approach towards women mourning the killing of Sarah Everard.

In the meantime, scrutiny of Britain’s most senior police officer on issues of women’s safety remains fierce with the commissioner on Saturday night accused of effectively blocking the national rollout of misogyny as a hate crime among police forces.

The academics who helped Nottinghamshire police become the first force in the country to treat the offence as a hate crime in April 2016 said the commissioner’s refusal to follow their lead in 2018 undermined the widespread adoption of the measure.

In November 2018 the chair of the National Police Chiefs’ Council, Sara Thornton, said incidents of misogyny should not be pursued because forces were too stretched, a stance supported by Dick who said her focus was on reducing violent crime.

Criminologist Loretta Trickett from Nottingham Trent University, whose work was instrumental in persuading her local force to adopt the offence, said: “If the Met had come on board with this all the other police forces would have followed because it’s so big and influential.

“What was so damaging was that it was deemed to be something trivial … the opposite of what Nottinghamshire police had been saying.

“We were trying to have this taken seriously by police and to have that undermined by the Met as the biggest force in the country was a big blow. That sent a clear message that they didn’t think it was important enough.”

“I don’t think the Met are joining the dots between street harassment against women and girls and how that can escalate into wider violence. They don’t see the connection between the sort of men engaged in street harassment and those who are committing rape and domestic violence offences,” added Trickett.

However Trickett and her colleagues did celebrate a breakthrough last Wednesday when ministers announced they would require police forces to collect data on crimes seemingly motivated by hostility towards women, a significant step towards making misogyny a hate crime.

A statement from the Met said: “The commissioner is determined to improve criminal justice outcomes for women and all victims of crime.”

It added: “At the current time there is no specific recognition of misogyny within the criminal law. However, such incidents may amount to harassment, threats, intimidation or assault which are criminal offences we take very seriously.

“We would urge anyone who believes they may have been a victim to report to us.”
#Priti Patel
Add Comment