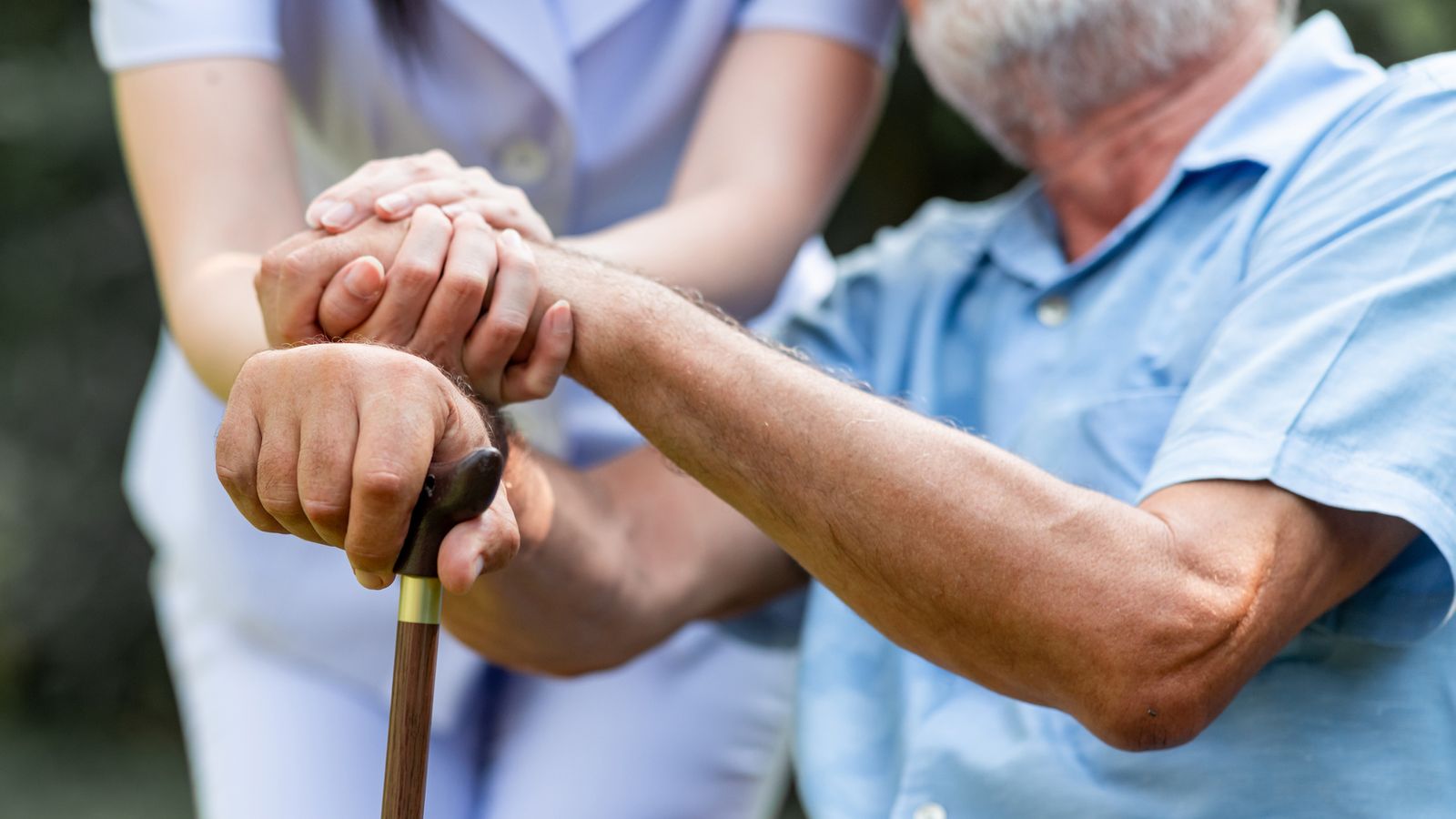 Having promised to "fix the crisis in social care" when he became prime minister, Boris Johnson in September announced a cap on care costs for adults in England from October 2023, promising a limit of £86,000 on how much an individual has to pay over their lifetime.

A controversial change to the government's social care reforms in England has been backed by MPs, despite critics arguing the move will disproportionately affect the poorest recipients of care.

A total of 18 Conservatives voted against the plans, joining Labour, the Liberal Democrats and the SNP, as Boris Johnson's working majority of 80 was cut sharply.

A further 70 Tories had no vote recorded, although this does not necessarily mean that they abstained.

Having promised to "fix the crisis in social care" on the steps of Downing Street when he became prime minister, Mr Johnson in September announced a cap on care costs for adults in England from October 2023, promising a limit of £86,000 on how much an individual has to pay over their lifetime.

Last week, the government announced it was introducing an amendment to the reforms which will mean that only the amount a person personally contributes to their care costs will count towards the £86,000 cap.

Anything the individual's local authority contributes will not be counted.

The change has sparked accusations it will be unfair on poorer people and those who live in areas where homes are worth less.

It means wealthy people who do not qualify for support will hit the cap threshold more quickly than poorer people who have part of their care funded by the council.

In essence, people who pay for all or part of their care will spend less than before if they end up needing prolonged care.

What are the changes and why could they be unfair?

In September the government announced a new £86,000 cap on the amount anyone in England should have to pay for social care.

People with less than £20,000 in assets – value of their home, savings or investments – will not have to pay anything towards their care, which is up from £14,250.

Those with assets between £20,000 and £100,000 will also now be eligible for new means-tested financial support from their local councils to help with the cost of their care.

This is calculated by taking into account how much income you have – and whether you are nearer the £20,000 lower limit or £100,000 upper limit.

In the original proposal by Sir Andrew Dilnot, which the government adopted as the basis of its social care reform, this means-tested support would count towards a cap on care costs.

But changes announced last week revealed means-tested payments from your local council will not count towards the £86,000 cap.

This has led to accusations it will be unfair on poorer people and those who live in areas where homes are worth less.

However, those council payments do not count towards the £86,000 cap, which means when the person dies that amount could still need to be paid for from their estate.

Because the £86,000 cap is universal, someone with a house worth £106,000 and long-term social care needs costing hundreds of thousands of pounds, could end up having their estate reduced to just £20,000.

In contrast, someone in exactly the same position with a £500,000 house would be able to leave a much greater proportion of their assets - £414,000 - to their next of kin.

But the richest will see a greater share of their assets protected - and those who are less well-off could still be forced to use up their savings or sell their home to pay for their care.

Labour's shadow minister for social care Liz Kendall said Conservative MPs "broke the promise they were elected on that nobody would have to sell their home to pay for care" by backing the change.

"Instead they voted to tax ordinary working people, while the wealthiest in our country are unaffected," she said.

Economist Sir Andrew Dilnot, who proposed a cap on costs 10 years ago, said the change will mean that poorer recipients of care will be hit the hardest.

"It would mean those who are less well off will hit the cap after much longer than those who are better off and will end up having to spend, if they have a long care journey, as much of their own money as people who are much better off," he told Sky News.

But the prime minister has defended the plans, saying they address a "long-standing social injustice" which has seen those who suffer from conditions like dementia facing "catastrophic" care costs.

"Under the existing system nobody gets any support if they have assets of £23,000 or more. Now you get support if you have £100,000 or less, so we are helping people," Mr Johnson said.

Another day, another Tory rebellion. This is beginning to become a habit for many increasingly mutinous Conservative backbenchers.

For Boris Johnson, after his disastrous CBI speech, at least his manic Monday didn't end with a government defeat on an important policy.

But the haemorrhaging of the prime minister's Commons majority from just under 80 – with two by-elections pending - to 26 will trigger alarm bells in Downing Street.

It's the latest in a series of revolts in recent weeks: Owen Paterson's suspension, MPs' second jobs, "the great train robbery" - although there hasn't been a Commons vote on that yet - and now social care.

The PM's critics argue that all were avoidable and have been the result of blunders by the prime minister or his inner circle of lickspittle cronies who give him terrible advice.

What annoyed many Conservative MPs who rebelled or abstained in the latest mutiny was that yet again a prime ministerial promise was broken and a U-turn was foisted on them at the last minute.

The 272-246 vote suggests around 100 MPs did not vote, meaning that there was a large number of Tory abstentions as well as those voting against the government.

Of the 18 Conservative MPs voting against the government and around 70 who did not vote, a significant number were from the Red Wall seats won from Labour at the 2019 election.

The social care battle now moves to the House of Lords, where peers are likely to chuck out the controversial new cap and no doubt trigger another bout of ping pong between the two chambers.

Labour, meanwhile, will no doubt link the penalising of poor households to Tory sleaze, since on the evening of the vote the party was auctioning time with ministers at a fund-raising bash.

It’s claimed dinner with Rishi Sunak went for £35,000 and karaoke with Liz Truss for £22,000, while the PM hit the phones to try to win over rebel MPs. But that was about as successful as his CBI speech.

"It is, in fact, more generous than some of the original proposals of Andrew Dilnot because it helps people not just who are in residential care but also people who benefit from domiciliary care as well.

"We are finally tackling a problem that has bedevilled this country for decades, been very, very unfair on people who have got dementia or Alzheimer's and been forced to face catastrophic, ruinous costs for that care when somebody who has cancer or some other affliction does not."

A means-tested system is in place at the moment for care, but those who are not eligible face potentially unlimited costs.

Some end up using their savings and selling their home to pay for their care.

Opening Monday's debate, health minister Edward Argar claimed to MPs that "no one will lose" as a result of the proposals.

One Tory MP who said he would not be supporting the move ahead of the vote was former chief whip Mark Harper, who said it "potentially disadvantages the less well off and those of working age with life long conditions".

The government argues the change will mean that people "do not reach the cap at an artificially faster rate than what they contribute".

The 2019 Tory manifesto said any reforms to the system must "guarantee that no-one needing care has to sell their home to pay for it".

But speaking to Sky News earlier on Monday, a minister failed to guarantee that people will not have to sell their homes to pay for care.