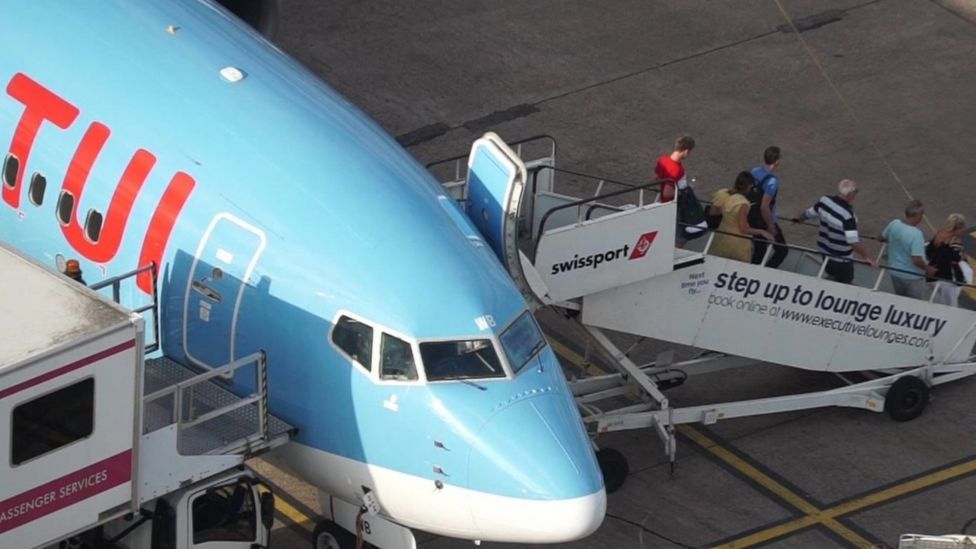 Passengers have expressed fury over what they see as poor treatment after travel giant Tui axed dozens of flights amid continued misery at UK airports.

Chris Thompson, whose flight home from Turkey was cancelled minutes before departure, told the BBC that Tui's organisation was "absolutely abysmal".

About 34,000 customers were told their June holidays out of Manchester had been axed, some in overnight emails.

Tui apologised and said the vast majority of its flights were operating.

"We understand that last minute cancellations are incredibly disappointing and we would like to reassure our customers that we are doing everything we can to get them on holiday as planned," it said.

Other airlines, including EasyJet and British Airways have also cancelled flights, amid staff shortages and other issues that have coincided with rising demand for foreign travel after the pandemic.

Mr Thompson, who is on holiday with his wife and three children in Izmir, Turkey, said the family were told their Tui flight home had been cancelled after they had already got through passport control.

The family were put up in a hotel on Tuesday night after spending more than five hours at the airport and were told they could get a flight back to Manchester at 16:00.

"Not knowing what's going on is becoming frustrating," he said. "The Tui number is constantly engaged."

He was later given a new estimated flight time of 02:20 on Thursday. 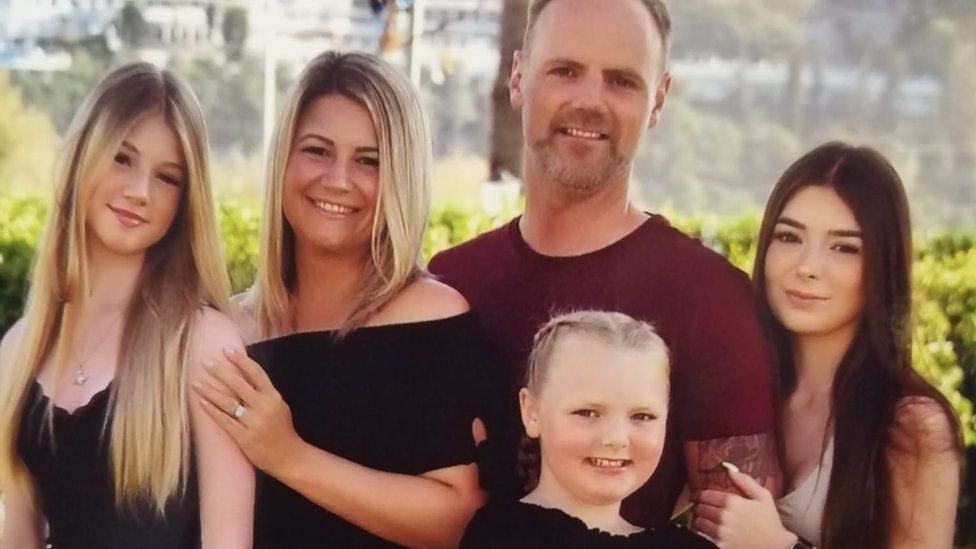 Chris Thompson said the disruption was "an absolute shambles"

Steve Butcher, from Gravesend, was due to fly on holiday to Paphos, Cyprus, on Wednesday morning.

But he woke up to an email from Tui saying their holiday was cancelled.

"My wife was in tears, she was so looking forward to it. We were all packed and ready to go," he told the BBC.

Steve said he then received another email from Tui saying their flight would now be on Thursday morning, but he is unsure whether to go to the airport tomorrow.

"If we do, we have to stay in a Travelodge as we will need to arrive in the early hours. But what if it gets cancelled again?" 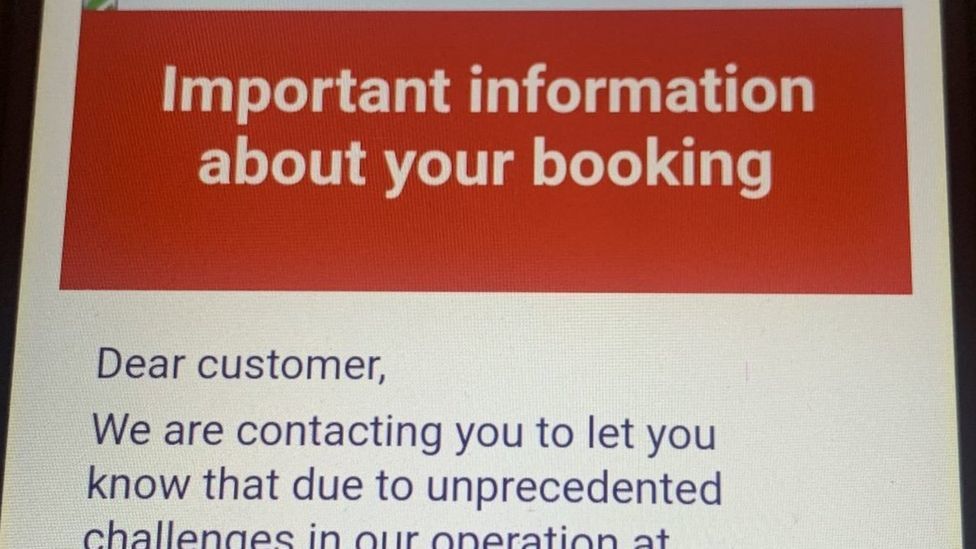 Tui is cancelling six daily flights at Manchester Airport, a quarter of its schedule at the hub

About 34,000 customers due to fly with Tui from Manchester Airport in June have been told their flights are now cancelled. For some, the news came overnight in emails sent after 02:00 BST on Wednesday.

Pat Karney, a councillor in Manchester, said he received an early-hours message confirming his holiday to Girona on 18 June had been cancelled.

He described the situation as a "shambles" and asked: "Why book us in the first place?"

Michael Dunne, who also received a notification, said he was assured by Tui his holiday was not affected when he phoned the firm on Tuesday evening - only to find out it was cancelled overnight.

"I made a phone call to them late last night and managed to actually get through... and I was told at that point last night that there was no impact to my holiday and it was going ahead," he said.

"I woke up in the middle of the night to find an email cancelling the holiday in its entirety, and if I would like to rebook using the website but cannot do so until Friday."

Mr Dunne told BBC Radio 5 Live that when he looked on the Tui website for the same holiday, flying on the same dates, to the same hotel but on a different flight, the quoted price was £5,000 higher than he paid. 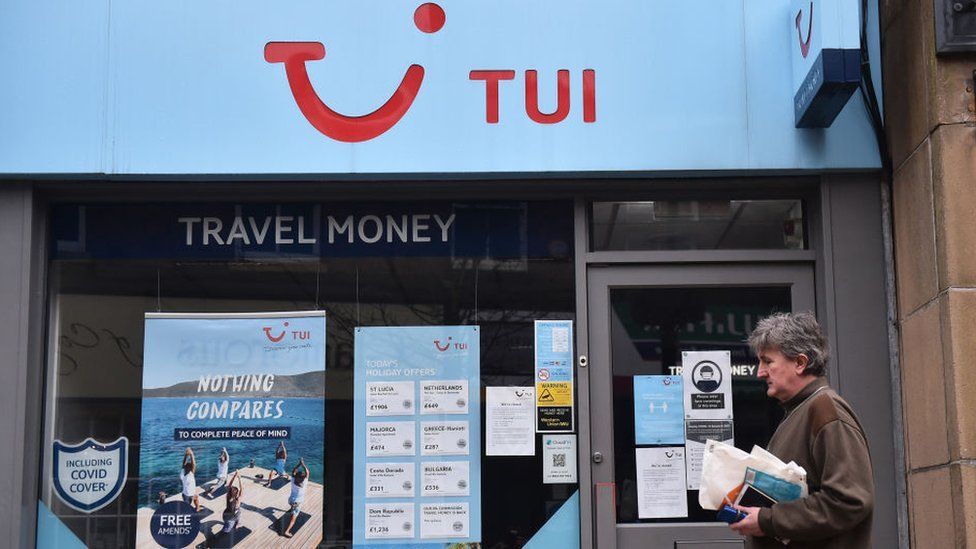 According to flight tracking firm Cirium, 377 flights have been cancelled from UK airports during the last week (25-31 May), with EasyJet the most affected airline and Gatwick the airport worst hit.

It comes as up to two million people prepare to fly over the next few days, with the Jubilee bank holiday coinciding with half-term.

The aviation industry is suffering from staff shortages as it struggles to recruit replacements for the thousands of workers it laid off during the pandemic when international travel was halted.

Before Covid, airports and airlines across Britain employed around 140,000 people, but since then thousands of jobs have been cut, including around 30,000 for UK airlines alone.

He reiterated that airline bosses should have been preparing for a "surge in passenger demand following two years of travel closures", the Department for Transport said.

Mr Shapps said he understood the sector's staffing problems but added it "does not excuse poor planning and overbooking flights that they cannot service".

"The companies who have seen the most disruption need to learn from those who ran services smoothly," he added.

Labour's Louise Haigh accused the government of being "missing in action" and called on ministers to address the backlog in security checks for new airline staff and address "chronic low-pay".

The transport secretary said the government had "made the changes needed to allow the sector to prepare for summer" and said it was now up to the industry "to do their bit".

"We have been crystal clear - run services properly and according to schedule or provide swift, appropriate compensation," he added. "We do not want to see a repeat of this over the summer."

The final Covid restrictions for people travelling to the UK were lifted on 18 March.

Airlines UK had said the sector had "only a matter of weeks to recover and prepare for one of the busiest summers we've seen in many years" but, despite this, "the vast majority" of flights this week would be operating as scheduled.

After the meeting, chief executive of Airlines UK Tim Alderslade added: "This isn't an airline issue or an airport issue or a government issue.

"We're in this together and we look forward to exploring options with ministers to move the sector forwards as we approach the summer."

Some European airports have also seen disruption this week.

Earlier the Paris Airport authority, which manages Charles de Gaulle and Orly airports, said software problems were affecting border controls leading to delays, although by lunchtime it said the system was gradually returning to normal.

Eurostar said an IT issue at the French border also led to delays of 30 to 60 minutes to train services.

Meanwhile, the operator of Dublin Airport said it could not guarantee the long delays seen last weekend would not be repeated over the bank holiday.