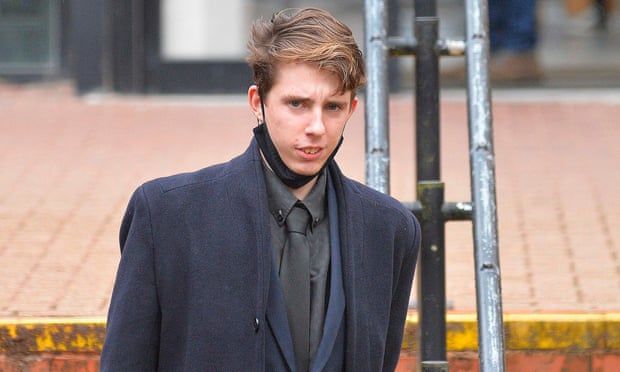 Ben John, who was convicted of a terror offence after downloading almost 70,000 white supremacist documents and bomb-making instructions, received a suspended prison term on Tuesday.

The 21-year-old avoided prison “by the skin of his teeth”, according to a judge who instructed him not to research any more rightwing material and return to court every four months to be “tested” on classic literature by Dickens, Austen, Shakespeare and Hardy.

Amid an outcry, a call for the case to be reviewed was made by the campaign group Hope Not Hate, which said the sentence was unduly lenient and sent a dangerous message at a time when the far right poses Britain’s fastest-growing terror threat.

“These sorts of lenient sentences risk encouraging other young people to access and share terrorist and extremist content because they will not fear the repercussions of their actions.”

A spokesperson for the attorney general’s office said on Thursday it had received a request for John’s sentence to be considered under the unduly lenient sentence (ULS) scheme. “The law officers have 28 days from sentencing to consider the case and make a decision,” they said.

The ULS scheme covers offences including some types of hate crime and terrorism-related offences.

John, from Lincoln, was described by police as a white supremacist with a neo-Nazi ideology.

He was given a two-year suspended sentence at Leicester crown court after his conviction on 12 August of possessing a record of information likely to be useful to a person committing or preparing an act of terrorism.

The offence, under section 58 of the Terrorism Act, carries a maximum sentence of 15 years’ imprisonment.

John came to the attention of counter-terrorism officers in 2018 after he wrote a tirade against gay people and immigrants but in 2019 he copied more than 9,000 rightwing and terror-related documents on to the hard drive of his computer, adding a further 2,600 a few months later in August 2019.

When he was sentenced on Tuesday, the Leicester Mercury reported that Judge Timothy Spencer concluded John’s crime was likely to be an isolated “act of teenage folly”.

After making him promise not to research any more rightwing material, the judge continued: “Have you read Dickens? Austen? Start with Pride and Prejudice and Dickens’ A Tale of Two Cities. Shakespeare’s Twelfth Night. Think about Hardy. Think about Trollope.”

An open letter by Hope Not Hate’s chief executive, Nick Lowles, said: “These sorts of lenient sentences risk encouraging other young people to access and share terrorist and extremist content because they will not fear the repercussions of their actions.”
Add Comment