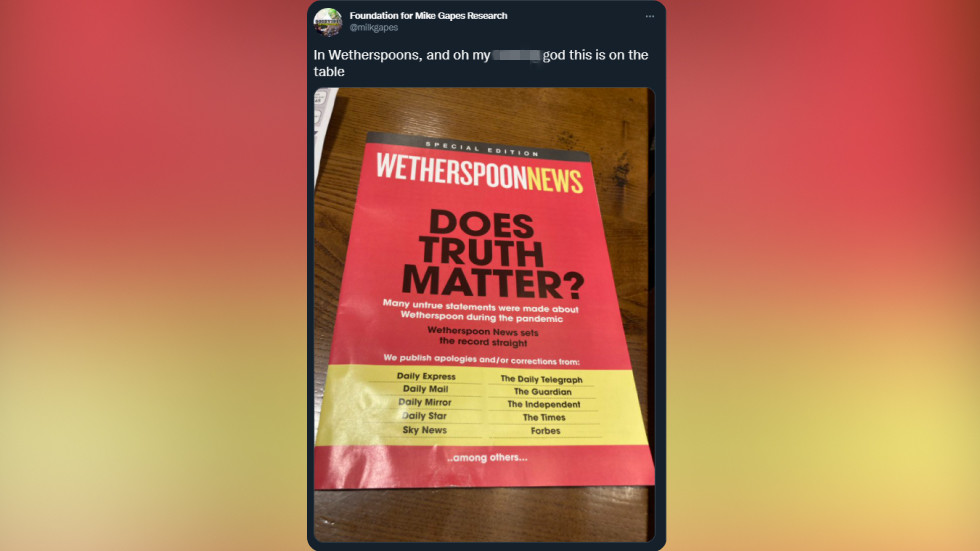 Brits on social media were shocked this week after JD Wetherspoon – one of the UK’s largest pub chains – printed and distributed a magazine of apologies from news outlets who had made “untrue statements” about the company.

After the Covid-19 pandemic and subsequent lockdowns prohibited pubs from opening last year, JD Wetherspoon and its founder Tim Martin were accused by several news outlets of telling staff to “work for Tesco,” a supermarket company, until pubs reopened.

Martin denied using that term and claimed he had merely informed employees that supermarkets were in need of staff; the allegations in the news were eventually retracted, with some organisations even issuing apologies.

Though many companies would have considered the matter resolved, Brits on social media were recently shocked to discover that the company had printed an entire magazine of corrections and apologies and distributed it to its 868 pubs across the UK.

“DOES TRUTH MATTER?” the magazine cover asked in bold, with the subheading, “Many untrue statements were made about Wetherspoon during the pandemic. Wetherspoon News sets the record straight.”

Corrections and apologies from The Daily Mail, The Guardian, The Daily Telegraph, The Times, The Independent, Sky News, The Mirror, The Daily Express, Forbes, The Daily Star, Metro, and others were published throughout.

“In Wetherspoons, and oh my f**king god this is on the table,” tweeted one Brit on Sunday, alongside a photo of the magazine. “He’s literally just printing a booklet complaining about people being mean to him online.”

Others from across the UK also reacted to seeing the magazine in their local pub.

“Remember in the Beforetimes? When pubs didn’t publish propaganda leaflets,” wrote one person, while another declared that “it is truly something that the biggest pub chain has it’s own propaganda mag.”

Martin is no stranger to political controversy, having been a strong supporter of Brexit who donated hundreds of thousands of pounds to the ‘Vote Leave’ movement in 2016.