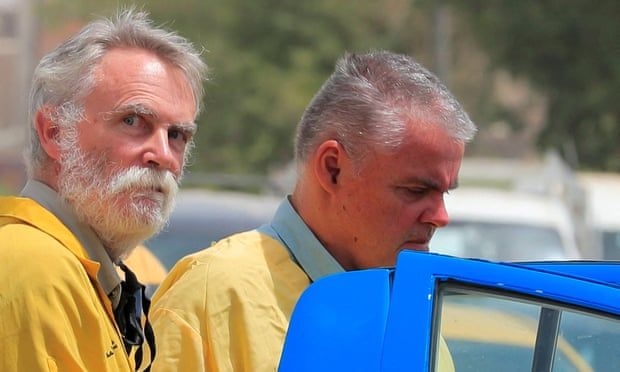 Jim Fitton, 66, hoped for short suspended sentence after collecting fragments during archaeology tour
Lawyers for a British geologist handed a 15-year sentence by an Iraqi judge after being convicted of smuggling antiquities will immediately appeal against the shock verdict, which has left his family “stunned”.

Jim Fitton, 66, arrived at court in Baghdad hoping for a short suspended sentence after being charged with collecting fragments from a site in southern Iraq during an organised archaeology tour. Instead, he was found guilty under a Saddam-era law that legal experts should not have applied to the case.

Fitton’s son-in-law, Sam Tasker, said: “It is just completely mindblowing that this verdict could be passed when the judge himself accepted that Jim did not have any criminal intent. It beggars belief that this sentence has been passed.

“Jim is the last person you would ever expect to be accused of something like this. He is hugely well-travelled, especially in the Middle East, for work and pleasure. He is the most respectful man when it comes to other cultures or history, it is the most ironic crime he could possibly be charged with.”

Thair Soud, acting for Fitton, said he would immediately appeal against what he claimed was a draft verdict ahead of a routine court review of the case in a week. “The court’s decision was not proper for two reasons,” he said. “The first is because it did not apply the law [correctly], and secondly because of the severity of the punishment.

“My client does not deserve this punishment. The antiques that were found with him were stones and pieces of broken pottery that had no material, or archaeological, value.”

Fitton was transferred to a police station near Baghdad airport after the verdict. His co-accused, German national Volker Waldmann, was found not guilty and is expected to be released. The pair had been in prison since 20 March when artefacts were found in their bags as they were leaving Baghdad airport.

Both men said they had no idea that collecting items from Iraq was illegal, and had not acted with criminal intent.

The trial has dealt a blow to Iraq’s tourism sector, which had slowly started to emerge from the ruins of war. Iraq offers new ground for archaeologists, geologists and tourists to explore ancient digs and sites that largely remained unexplored through the Saddam years and the two decades of turmoil since.

Soud said the law had been applied wrongly to Fitton’s case and had instead been meant to safeguard wilful theft of items of real value. “These [items found on Fitton] are the types of things that you can find in a desert abandoned and without a fence, warning signs, protection or security. If they even had the value of one Iraqi dinar, you couldn’t find a single item, because they would have been all collected and sold.

“They accused my client according to Iraqi antiquities law which covers statues, pottery heads and things that have archaeological value. We have given the court substantial evidence that he didn’t mean to steal antiques and all he had on his person was abandoned stuff which doesn’t have any value.

“The court’s decision was a draft and in a week’s time there will be a final decision and for sure we will appeal because the most important thing in court is [moral responsibility] or intent to commit a crime.”

Soud added: “In his house you can find a lot of these things from different countries. He has a habit that wherever he goes he collects something from there. It could be sand or stone or anything that doesn’t have value, you can find many things like this in his house.”

Wera Hobhouse, the Liberal Democrat MP for Bath, said: “Now the foreign secretary must step up to intervene and there must be a root and branch review into how cases like Jim’s are dealt with in the future.

“The government has ignored the family’s pleas to intervene. The ministers have failed to engage with Jim’s family and they have set a dangerous precedent for British citizens who are in trouble abroad.”
Add Comment