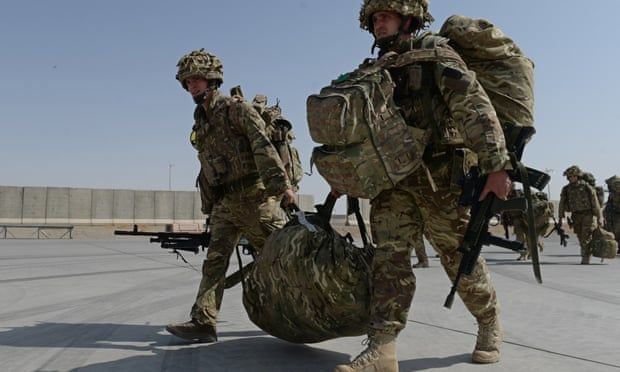 Exclusive: Costs of War study looked losses suffered by Nato allies over 2001-17, finding UK lost 455 lives
British and Canadian troops were more than twice as likely to get killed in Afghanistan as their US counterparts, according to a study that looks at the scale of the sacrifice made by Nato allies over the course of the 20-year war.

The UK also gave more to Afghanistan than the US in the form of economic and humanitarian assistance as a percentage of GDP, the study published on Wednesday by the Costs of War project at Brown University found.

Although the US suffered by far the greatest number of fatalities in absolute terms compared with other members of the International Security Assistance Force (ISAF) – 2,316 American troops were killed between 2001 and 2017, the period of the study – Canadians and British soldiers sent to Afghanistan were more likely to die.

The Costs of War report looks at fatalities as a percentage of national troops levels at peak deployment in Afghanistan. The US losses were 2.3% of its vast military presence. The UK lost 455 lives, which was 4.7% of its peak deployment level, while the 158 Canadians killed represented 5.4% of their total.

The study refers to a grim joke told by American soldiers in Afghanistan that ISAF stood for “I Saw Americans Fight”, but points out in the case of the UK and Canada at least it was grossly unfair.

“Americans do not fully understand, do not acknowledge, the sacrifices that allies made in Afghanistan,” said Jason Davidson, the author of the report, and professor of political science and international affairs at the University of Mary Washington.

“It’s something that not only doesn’t get attention from those who are critics of the allies. It doesn’t even get the attention that it deserves from those who are generally cheerleaders for allies, like the current administration. I would like to see more American policymaker acknowledgment and discussion with the public of the costs that America’s allies have incurred in these wars.”

Davidson suggested that the reason for the proportionally high British death toll was being based in the heart of the hotly contested Helmand province and the absence of caveats limiting soldiers’ involvement in combat. The German contingent was largely confined its bases at night and to armoured vehicles on patrol in the relatively quiet north of the country, and its fatality rate was 1%. The rates for the French and Italian contingents were 2.1% and 1.2% respectively.

The findings echo a study in December by the UK-based group Action on Armed Violence, that found British soldiers were 12% more likely to have been killed than their American counterparts in the overall “war on terror” in Iraq and Afghanistan.

“It is clear that Afghanistan proved to be a significant burden for UK troops,” Iain Overton, the editor of that study, said. “The UK military suffered almost three-quarters of its total deaths there in the last two decades.”

Another striking finding of the Costs of War report was that the UK spent slightly more on foreign aid to Afghanistan as a percentage of GDP (0.16%) than the US (0.15%) with Germany and Canada close behind with 0.14%.

Elinor Sloan, professor of international relations at Carleton University in Ottawa, said that Canada’s relatively high casualty rate was due in part to a lack of mine-resistant vehicles, MRAPs, and troop helicopters.

“We moved from Kabul into Kandahar in early 2006, and troops were going out in convoys, so almost all of the casualties are taken in the convoys. We didn’t have the MRAPs,” said Sloan, who wrote an assessment of Canada’s role in Nato in 2012.

After 20 years of conflict in Afghanistan, as the US and the coalition embark on the last stages of withdrawal, the costs of the long war are coming under increasing scrutiny.

Nearly 50,000 Afghan civilians were killed. Overton said 40% of the civilian casualties from US and Afghan airstrikes between 2016 and 2020 were children.

“What is clear is that Afghanistan proved to be not only a graveyard for British troops,” Overton said. “Coalition military forces there also were part of making it a graveyard for countless Afghan civilians.”
#Afghanistan
Add Comment