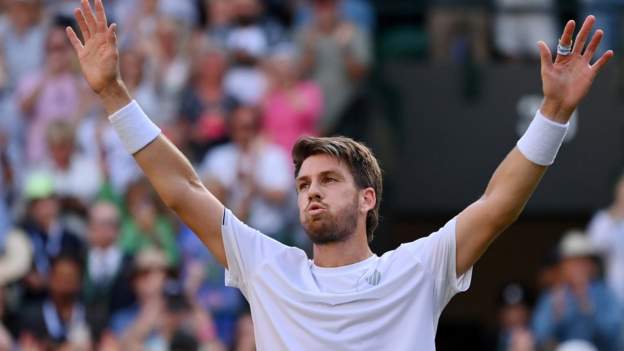 Britain's Cameron Norrie reached the Wimbledon semi-finals by fighting back to beat David Goffin in a memorable five-set thriller which left the home fans celebrating jubilantly.

As his name was chanted around Court One, he was overcome with emotion.

Asked for his reaction to beating Goffin, Norrie said: "Honestly? Speechless. I can't even talk."

The British men's number one, known for his laid-back demeanour, showed a unusual flicker of emotion during his on-court interview.

The Duke and Duchess of Cambridge were among the 11,000 or so fans who watched as the world number 12 absorbed the finest moment of his career.

Norrie added: "I think just winning a match like this, I'm in shock. I don't know what to say now.

"I have flashbacks of all the hard work and all the sacrifices I have had to make and it's definitely paid off - and it feels pretty good."

Next he faces top seed Djokovic, who is chasing a fourth successive title and a seventh in total at the All England Club.

The 35-year-old Serb was given a huge scare by Italy's Jannik Sinner before fighting back to win in five sets earlier on Tuesday.

"It great to get this now but it's only going to get tougher," Norrie told the Wimbledon crowd.

"I'm going to take it to Novak and hopefully you guys can get behind me and I'm sure you will."

As the highest seeded Briton in the singles draws, Norrie may have been predicted to be the last home player left but was breaking new ground by reaching the quarter-finals.

Now he has moved one step further.

The left-hander had never previously been past the third round of a Grand Slam tournament, despite a fine couple of years which have seen him reach the world's top 10.

Reserved and understated, Norrie does not receive - or seek - the same level of attention as what Murray has received throughout his career.

But he has found himself thrust into the spotlight, saying he has been "enjoying and embracing" being the leading home hope at Wimbledon.

That was evident in a confident performance in the fourth round against Tommy Paul, but was missing in the opening stages against an inspired Goffin.

Still, he refused to become overly despondent and fought back to take a momentum-swinging match into a decider.

In front of an enthusiastic crowd now including the Duke and Duchess of Cambridge, who were earlier on Centre Court and headed over after Djokovic's win, Norrie kept his cool in an increasingly tense situation.

Former world number seven Goffin had served well in the decider until being broken to love for 6-5 and, remarkably, that was the first time in the match where Norrie had led.

He saw a first match point disappear when Goffin pummelled past a winner, but took his second opportunity to become only the fourth British man - following Murray, Tim Henman and Roger Taylor - to reach the Wimbledon singles semi-finals in the Open era.

How a multi-cultural journey is thriving in London

Norrie's journey began in Johannesburg and, after moving to Auckland as a child and then studying in Texas, has since made a home in London.

With a Welsh mother and a Scottish father, he was always destined to represent the nation despite retaining a hint of a New Zealand accent.

His parents, microbiologists David and Helen, have been a driving force in his life and watched on proudly as they shared the finest moment of his career at the All England Club.

The couple still live in New Zealand and missed much of his recent rise in the flesh because of the coronavirus pandemic.

But they have been following their son around the European clay and grass tournaments since flying over to Rome in May.

His sister Bronwyn, who lives in London, was also among his loved ones watching on court, along with his old landlady, Linda, and friends from his university days in the United States.

After sealing victory over Goffin, Norrie walked over to his box where mum Helen and girlfriend Louise were both overcome by the moment.