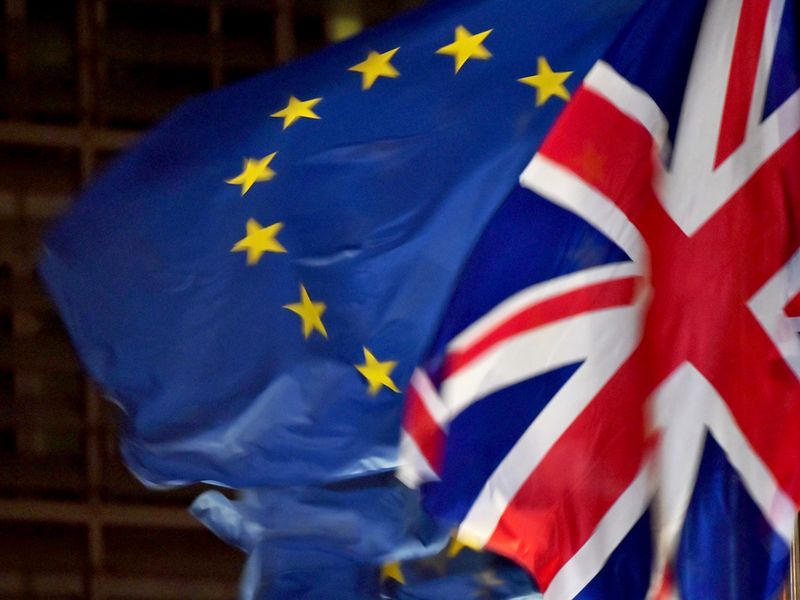 A trading deal the City of London has sweated over for almost half a decade looks like it's finally here.

"The tea leaves are shaped in the right direction," Luke Hickmore, a fund manager at Aberdeen Standard Investments who helps manage £35 billion ($46 billion), said before the announcement. "Certainly the market is buying into it."

Negotiators are still putting the finishing touches to a Brexit accord, according to officials familiar with the matter who spoke on condition of anonymity.

The FTSE 250 index of more domestically oriented U.K. companies surged as much as 1.7%, while the FTSE 100 had a more muted gain of 0.7% as the pound's advance weighed on exporters. Options traders had been positioning for a deal, dragging down the cost of hedging a weaker sterling over the coming month to the lowest since Dec. 4.

Money markets pared bets for monetary easing by the Bank of England, pushing back the pricing of a 10-basis-point interest-rate cut to March 2022, compared with expectations Tuesday for November 2021.

The pound could rise as high as $1.37 if a deal is finalized and Britain and the EU minimize disruption during the initial adjustment phase next year, said Lee Hardman, foreign-exchange strategist at MUFG Bank. Yet the country's weak economic fundamentals could limit gains. "Tightening economic restrictions will increase pressure on the Bank of England to implement negative rates early next year, posing downside risks," he said.

Prime Minister Boris Johnson imposed tougher regulations Wednesday throughout a swath of England in an effort to stamp down on the mutant virus strain that's spreading quickly across the country.

"Due to the limited nature of a deal, we don't necessarily see sterling finding too much relief beyond an additional percentage point," especially as tighter restrictions look to be extended to other parts of the U.K., said Simon Harvey, a foreign-exchange analyst at Monex Europe.

The pound was already trading in turbulent territory as the time for a deal ran out. Volatility over the past week is near the highest since March, when the coronavirus roiled global financial markets. At about 15%, it's nearly double that of the euro-dollar pair. And its implied volatility over the next week beats all other currencies, save Brazil's real and Turkey's lira.