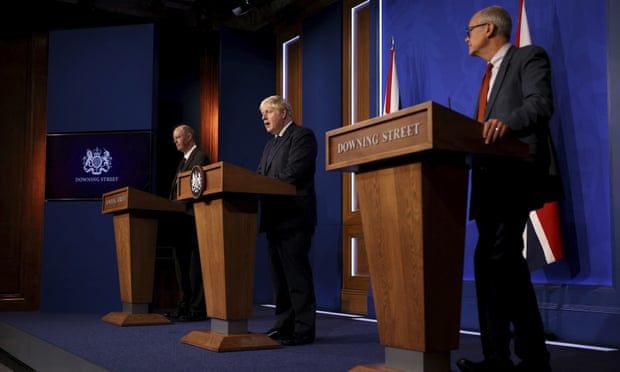 Between 2,000 and 7,000 people a day could be hospitalised with Covid in England next month unless the government urgently implements a “basket of measures”, government scientific advisers have warned as Boris Johnson made clear he hopes to avoid fresh restrictions.

The prime minister confirmed on Tuesday that Covid passports, the return of mandatory mask-wearing and advice to work from home would be kept in reserve as the government’s “plan B”, to be introduced if the NHS is at risk of being overwhelmed.

But newly published modelling from experts on the Sage advisory committee warn the government not to wait too long, with cases, hospitalisations and deaths all higher than a year ago despite the success of the vaccination programme.

Speaking alongside Johnson at a Downing Street press conference, the government’s chief scientific adviser, Sir Patrick Vallance, also said experience of battling the virus showed “you have to go earlier than you think you want to, you have to go harder than you think you want to”. He said the UK was now at a “pivot point” where, if the situation worsens, it could do so rapidly.

Modellers on the Sage committee expect cases to rise in the coming months after almost all restrictions were lifted this summer, documents show. Daily hospitalisations could plausibly peak at 7,000 in England next month, far surpassing the winter peak, which reached 4,500 UK-wide, according to the updated modelling. Currently about 1,000 people with Covid are being admitted to UK hospital wards each day. 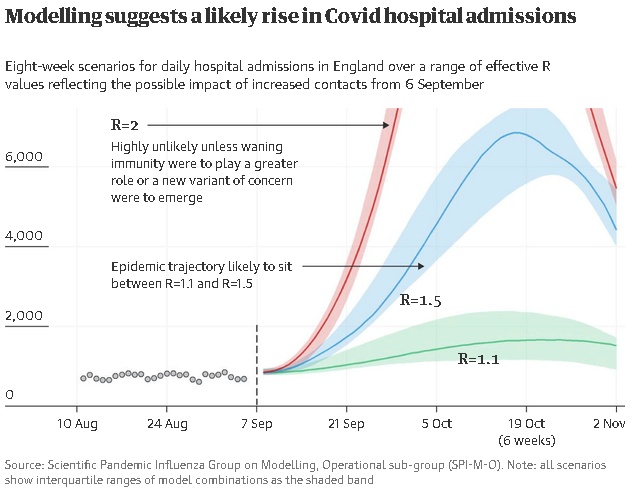 But if enacted early enough, before a rise in cases becomes sustained, even light-touch measures could be sufficient to keep infections flat and prevent a damaging fresh wave of hospitalisations, the Sage documents say.

“With the current levels of high prevalence combined with unknown behaviours, the burden on health and care settings could rise very quickly,” the scientists warn. They say “it could be a very difficult winter ahead” if acute Covid combines with other pressures such as long Covid, other infections like flu, or co-infection causes more serious illness.

Even though 81% of UK adults are double-jabbed, nearly 6 million are unvaccinated and vulnerable to the highly-transmissible Delta variant now most Covid restrictions have been lifted.

Sage modellers expect R – the number of people an infected person typically infects – to rise from about 1 in England to between 1.1 and 1.5 with schools reopening and people returning to work. If so, daily hospitalisations could peak at between 2,000 and 7,000 in October they said. More extreme scenarios that project many more cases are highly unlikely, the modellers add, without substantial waning of immunity or a new coronavirus variant emerging.

The recommendations were published as the health secretary, Sajid Javid, set out the government’s autumn and winter plan for tackling the virus. 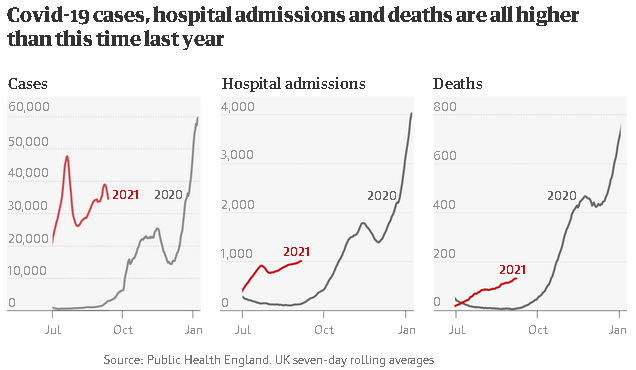 He said ministers’ “plan A” included pressing ahead with booster jabs for the over-50s and clinically vulnerable and expanding vaccination to 12- to 15-year-olds, and continuing to advise the public to meet outdoors where possible and wear masks in enclosed spaces.

Javid also announced contingency measures for the autumn and winter including mandatory masks, compulsory vaccine passports for large and crowded venues, and urging the public to work from home.

When Javid was appointed in June, he described the removal of Covid restrictions as “irreversible” but setting out the plans to the House of Commons on Tuesday he declined to rule out another lockdown and conceded: “Any responsible government must prepare for all eventualities.”

Asked at Tuesday’s press conference when tougher restrictions may need to be implemented, the prime minister said: “Just bear in mind what we’re trying to prevent, which is the overwhelming of the NHS, and that will remain our objective.”

The chief medical officer for England, Prof Chris Whitty, stressed the pressures the NHS was already under. “We are entering the winter with this reasonably high level; it wouldn’t take many doubling times to get into trouble; and therefore people still need to take this disease very seriously,” he said.

The government’s autumn and winter plan set out for the first time details of how it would implement vaccine passports – a proposal announced by Johnson in July but that provoked a furious backlash from Tory MPs.

At the weekend Javid confirmed plans to introduce Covid passports from October had been ditched but on Tuesday the government acknowledged they might need to be implemented at short notice – and encourages businesses to introduce them voluntarily. The Sage group proposes “a basket of measures” they believe are light enough to keep the epidemic under control if brought in soon enough. They include more mask-wearing, encouraging continued home working, clear messaging about the remaining risk of catching Covid, more widespread testing and a return to requiring all contacts of positive cases to self-isolate.

The scientists are concerned that if ministers wait until cases take off, such light-touch measures will fail and more severe restrictions will be needed to bring the epidemic back under control.

A consensus document from the modellers, written on 8 September, says that rather than the sharp peak anticipated at the end of the summer, hospitalisations could peak next month and remain high into the winter.

The scientists add there is a “clear consensus” that high levels of home working played a major role in keeping the epidemic under control in recent months, and warn: “It is highly likely that a significant decrease in home working in the next few months would result in a rapid increase in hospital admissions. If enacted early enough, a relatively light set of measures could be sufficient to curb sustained growth.”

Sage scientists have stressed through the pandemic that the scenarios they model are neither forecasts nor predictions and come with substantial uncertainties, largely because it is difficult to predict how people will behave.

Modelling in September last year was instrumental in Sage calling for an urgent “circuit breaker” to prevent cases from soaring, though other projections have under- or over-estimated how fast the epidemic was growing. In the summer, the experts expected cases to reach 100,000 a day but infections fell sharply in July before picking up again.