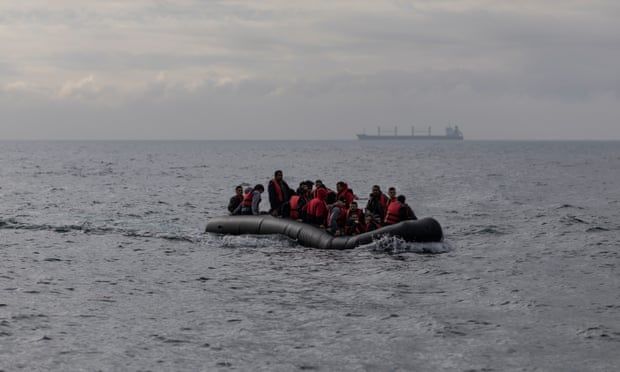 Aeolian Offshore and CWind, both of which usually serve offshore wind industry, providing boats and crew. The under-the-table commission for this grandiose and unnecessary expenditure flows into the exact same pockets that receive the commission from the unnecessary money paid to the corrupt Rwandan government, as usual.
The Home Office has paid private companies more than £2.5m this year to charter boats and crew to pick up people trying to cross the Channel, amid tension with the Royal Navy over its role in the home secretary Priti Patel’s plans to deter asylum seekers.

Contract disclosures published on a government portal show that Aeolian Offshore, which is based on the Isle of Wight and usually serves the offshore wind industry, is the largest beneficiary.

It provided three boats for six months, earning just under £2m. The Home Office spent a further £564,000 for five months of vessel hire from another company, CWind, which also usually works for wind power firms.

Details of the outsourcing plans were published as the number of people crossing the Channel in small boats hit a new record, despite the government’s controversial plan to deter them by striking a deal with Rwanda to deport asylum seekers to the central African state.

According to the contract with Aeolian, its three vessels will work in 12-hour shifts, departing from Ramsgate, Kent, and sailing to “reported sightings of migrant vessels, to collect the migrants found”.

The boats, which usually have space for 12 passengers and three crew, must be able to accommodate a “minimum of 100 migrants” on deck, it states, as well as towing any craft that the people they pick up may have used to cross the Channel.

The contract stipulates: “Border Force staff will conduct all migrant movements and work the deck areas while at sea. The migrants will then be placed in Dover before the vessel returns to Ramsgate overnight.”

However, the contract also states that Aeolian will provide some crew, who “may be required to assist” with managing people who are picked up.

A spokesperson for Seacat Services, Aeolian’s parent company, said crew were provided with “specialist training in advance, and ongoing support throughout their time on the vessels to handle the unique challenges of the work”.

They added that there was ample room on the boats for 100 people, as well as the 12 Border Force staff and three crew.

Data from the boat-tracking website Marine Traffic shows the three vessels – 24-metre catamarans called Seacat Defender, Seacat Volunteer and Seacat Ranger – have made regular voyages into the Channel and between Ramsgate and Dover over the past few days.

Aeolian Offshore, which owns the boats, is an offshoot of Seacat Services, a company that typically supplies them to service offshore wind farms.

It won the £1.97m contract, which starts in June and ends in January next year, against the backdrop of growing disquiet about Operation Isotrope, the plan by the home secretary to enlist the Royal Navy to deter people seeking to cross the Channel.

Earlier this year, the Observer reported that the Patel plan was in disarray, with defence chiefs increasingly exasperated at the Home Office. One former defence minister said that involving the navy had turned it into a “taxi service”.

Details of the CWind contracts have not been published, but the outline disclosure states that its work involves “personnel transfer in support of migrant operations”. The company is to be paid £564,000 over five months. Like Aeolian, CWind – which Companies House filings show is owned by the US investment firm JF Lehman & Co, usually serves the offshore wind industry.

A spokesperson for the Home Office said it would not comment on operational matters.

“However, we will always ensure Border Force have the resource they need to protect our borders, including cracking down on the unacceptable small boat crossings and to save lives in the Channel,” they said.

Ian Baylis, the founder of Seacat Services and managing director of Aeolian Offshore, said the company was partly motivated by the “humanitarian” aspect of intercepting migrant boats.

“Seacat saw the tender come out a few months ago and, upon review, it was clear the requirement suited the class and design of the vessels we operate,” he said.

“We therefore decided to bid on the basis that it secures employment for our vessels and therefore crew, but also we felt this work was an important thing to be able to assist with, given the importance of the humanitarian element.

“Seacat also has an agenda to continue to expand the offshore wind fleet with more British designed, built, flagged and operated vessels. As such, being able to secure employment for a good percentage of our fleet enables us to make further investment decisions in support of the offshore wind sector and its supply chain.”

Accounts for Seacat Services, filed at Companies House, show it has an exemption from filing full accounts.

The exemption applies if companies have two of the following: an annual turnover of less than £6.5m, assets of no more than £3.26m or fewer than 50 staff.
#Priti Patel
Add Comment