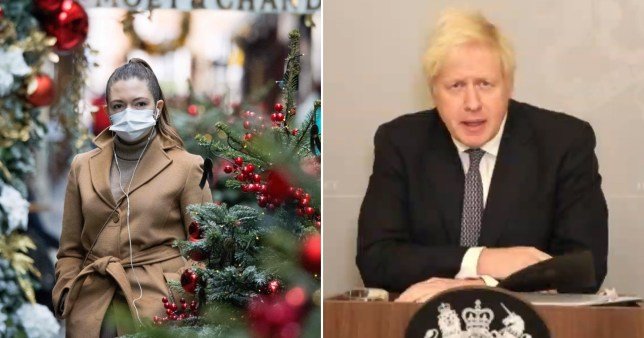 Earlier today, the Prime Minister had outlined his plan to take England out of lockdown on Wednesday, December 2 and replace it with a strengthened tier system. But he again promised a relaxation of restrictions over Christmas to allow families to get together.

Details of the relaxation of Christmas restrictions have not yet been finalised with the administrations in Scotland, Wales and Northern Ireland. Asked about an agreement of rules for Christmas across the nations of the UK, Mr Johnson said tonight: ‘We want people to be able to celebrate, but we don’t want to ruin it by overdoing it.

‘I think there’s a wide measure of agreement about that and I think you can probably expect some news about the way forward pretty soon.’

He continued: ‘I know that many of us want and need Christmas with our families, we feel this year we deserve it.

‘But this is not the moment to let the virus rip for the sake of Christmas parties.

Professor Chris Whitty, England’s Chief Medical Officer, urged people to be responsible and said there was ‘risk’ attached to the loosening of restrictions over Christmas.

He said: ‘It is pretty obvious I think to anybody, that the Christmas holiday period – the loosenings around that – which I think everyone welcomes as an ability for families to come together and all the things that go with the winter period, we all know that that’s going to come at a risk.’

Professor Whitty said it is ‘absolutely essential people are really serious about this’, and warned: ‘We are very, very mindful of the fact that if we start breaking all the rules then we are putting other people at risk at a point of the year when these viruses transmit most easily and when the NHS is under greatest pressure.’

Meanwhile, Mr Johnson said there are no plans to close schools a week early to allow a safe period of time before children see elderly or vulnerable relatives at Christmas.

He said: ‘At the moment we’re not planning to do that.

‘One of the things we really attach, as a country, as a society, a huge importance to is keeping pupils, keeping kids in school and keeping young people in education wherever we can.

‘That’s been at the heart of what we’ve been trying to do over the last few months and it’s meant that we’ve had to put a lot of pressure, sadly, on other sectors in order to drive down transmission.’

Earlier, he told MPs: ‘I love Christmas. I love a big get-together.

‘I think the trouble is that the people of this country can see that there is a real risk that if we blow it at Christmas with a big blowout Christmas, then we’ll pay for it in the new year, and they want a cautious and balanced approach and that’s what we will deliver for the whole UK.’