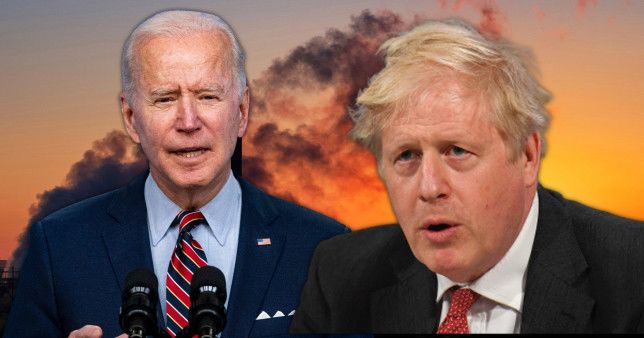 Boris Johnson took a thinly veiled swipe at former US President Donald Trump on Thursday, as he backed new American leader Joe Biden’s pledge to half greenhouse gas emissions by the end of the decade.

The PM declared himself really thrilled at the ‘game changing’ announcement and praised Mr Biden for ‘returning’ the US to the front rank of the fight against climate change.

Speaking at a virtual environmental summit on Thursday, Mr Johnson called on world leaders to ‘build back better by building back greener’ and said the world has ‘to deal with the disaster of habitat loss and species loss across our planet’.

His comments come ahead of the UK hosting the crucial COP26 event in Glasgow later this year – an environmental summit seen as a major moment in the battle to reverse climate breakdown.

Earlier, President Biden had warned that the 2020s are the ‘decisive decade’ in the crisis.

He set out a new target to achieve a 50-52% reduction in emissions from 2005 levels by 2030, as he hosted a virtual leaders summit to galvanise international action.

Both the US and UK leaders stressed the opportunities to create jobs from shifting to clean energy and technology.


Countries across the world have been asked to come up with more ambitious for their ‘nationally determined contributions (NDC)’ ahead of November’s COP26.

That is because existing plans are not nearly enough to meet countries’ commitments under the COP21 Paris deal to curb global temperature rises to as little as 1.5C if possible.

Campaigners and experts have repeatedly warned that immediate and radical action needs to be taken to lessen the worst affects of rising global temperatures.

Mr Johnson said: ‘As host of Cop26 we want to see similar ambitions around the world, we are working with everybody from the smallest nations to the biggest emitters to secure commitments that will keep change to within 1.5C.

‘I think we can do it, to do it we need scientists in all of our countries to work together to produce the technological solutions that humanity is going to need.’

The PM also highlighted the need for rich nations to go beyond existing commitments to deliver 100 billion US dollars a year in finance to support developing countries to tackle the climate crisis.

He said climate action was not an ‘expensive, politically correct, green act of bunny hugging’ but could deliver green jobs and growth, and the world could build back better from the pandemic by building back greener.