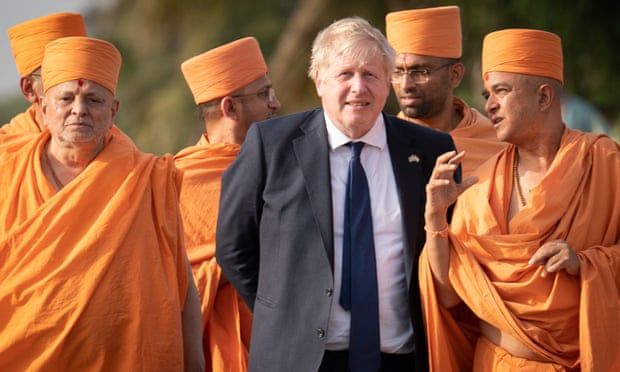 Boris Johnson will face a Commons inquiry over whether he lied to parliament after Downing Street withdrew an attempt to force Conservative MPs to delay the new Partygate investigation.

In dramatic scenes on the floor of the Commons, two more Tory MPs called for Johnson to quit on Thursday, including the influential Brexiter Steve Baker. “The prime minister now should be long gone,” the former minister said. “Really, the prime minister should just know the gig’s up.”

A Labour motion to launch a parliamentary investigation into whether Johnson lied to MPs about Downing Street parties passed without a vote on Thursday afternoon.

Hours earlier, government whips had pulled an amendment that would have delayed any vote to start the inquiry until after the Sue Gray report was published.

William Wragg, the chair of the Commons’ constitutional affairs committee, said he had written a letter of no confidence in the prime minister and that he would have rebelled if the government had not withdrawn its amendment.

“The matter before us is one of the heart of this institution, of our parliament. I love this place, believing it to be a place of high ideals and purpose. What is said here matters,” he added.

Bob Neill, who chairs the justice committee, stopped short of calling for Johnson to go but said he had planned to abstain on the Labour motion calling for an inquiry by the privileges committee.

Opening the debate, the Labour leader, Keir Starmer, said it was imperative for MPs to judge if Johnson had deliberately misled them with his denials of Partygate lockdown breaches in Downing Street.

“He has stood before this house and said things that are not true, safe in the knowledge that he will not be accused of lying. He has stood at that dispatch box and point blank denied rule-breaking took place, when it did,” Starmer said.

“As he did so, he was hoping to gain extra protection from our assumption, and from the public assumption, that no prime minister would deliberately mislead the house. He has used our good faith to cover up his misdeeds.”

Speaking to reporters on his trade visit in India, Johnson said he had reversed his position on the amendment because he had “nothing to hide” – but appeared irritated at Labour’s determination to continue pressing the issue.

“People were saying it looks like we are trying to stop stuff. I didn’t want that. I didn’t want people to be able to say that. I don’t want this thing to endlessly go on,” he told Sky News. “But, I have absolutely nothing, frankly, to hide. If that is what the opposition want to talk about, that is fine.”

Asked about Baker’s call for him to resign, Johnson said: “I understand people’s feelings. I don’t think that is the right thing to do.” He conceded the situation was serious, however.

A senior government source said the amendment on Wednesday night had been tabled to allow an inquiry to take place after the internal Whitehall report by the civil servant Sue Gray is published – although it made no specific commitments that the inquiry would still be allowed.

“We now recognise that – in practice – this is almost certainly likely to be the case and therefore we are happy for the Labour motion to go through if that is the will of the house,” the source said.

There were chaotic scenes in Westminster before the debate on the motion. With minutes to go before the debate, Mark Spencer, the leader of the Commons, told MPs they would have a free vote, saying the prime minister was “keen for the house to decide on the business later today”.

Chris Pincher, the government’s deputy chief whip, then texted Tory MPs telling them Johnson was “happy for the Commons to decide on any referrals to the privileges committee”. He added the government would “no longer move our tabled amendment”. MPs were told they were on a one-line whip – in practice meaning they were free to leave Westminster and head to their constituencies.

On Wednesday, Tory whips had scrambled to find a way to block or delay the inquiry by the privileges committee. Even among frontbenchers there was palpable disquiet that MPs should be forced to block an investigation into the prime minister, who received a police fixed-penalty notice last week.

But MPs had privately and publicly asked whips not to give Labour the opportunity to paint them as taking part in a cover-up. Earlier in the Commons, the Tory MP Charles Walker had urged the government to reconsider whipping MPs to delay the inquiry.

“I believe genuinely that the prime minister is a good and decent man and he can make the case to the privileges committee directly without having this house to divide and yet more poison be pumped into public life.”