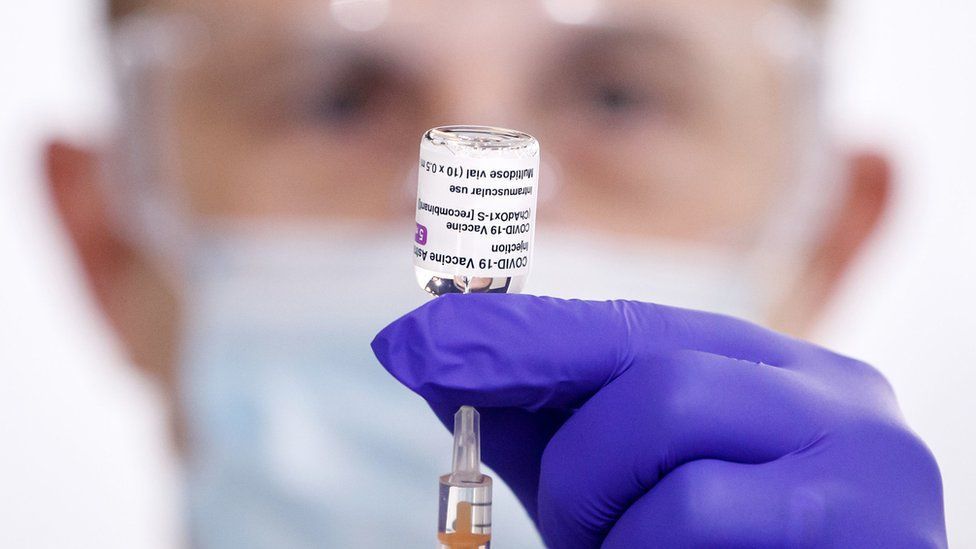 Boris Johnson 'very confident' in vaccines being used in UK

Boris Johnson says he is "very confident" in the Covid vaccines being used in the UK, amid concerns about the Oxford-AstraZeneca jab's effectiveness against the South Africa variant.

The vaccines are effective in delivering a high degree of protection against serious illness, the PM said.

But scientists are confident it will protect against serious disease.

Some 147 cases of the South Africa variant have been found in the UK.

However, the Oxford vaccine has shown to provide good protection against the so-called Kent variant, which remains the dominant strain in the UK.

The prime minister said: "We're very confident in all the vaccines that we're using.

"It's important for people to bear in mind that all of them, we think, are effective in delivering a high degree of protection against serious illness and death, which is the most important thing."

England's deputy chief medical officer, Prof Jonathan Van-Tam, told a Downing Street briefing that initial data from Pfizer-BioNTech, Novavax and Janssen - all of whose vaccines the UK has ordered - suggested they had a "substantial effect at reducing serious illness".

Prof Van-Tam said headlines about the study have been "a bit scary" but his advice to anyone "on the edge" about whether they should wait to get vaccinated would be: "Do not delay, have the vaccine that will protect you against the current threat."

"Early data" suggested the South Africa variant did not have any advantage over the Kent variant, so it was unlikely to become dominant in the UK in the short term, he said.

"There is no reason to think the South Africa variant will catch up or overtake our current virus in the next few months."

The Oxford-AstraZeneca and Pfizer-BioNTech vaccines are currently being rolled out in the UK, where nearly 12.3 million people have been given a first dose according to the latest figures - almost one in four adults.

Another 14,104 confirmed cases were reported on Monday and a further 333 deaths were recorded within 28 days of a positive test, bringing the total to 112,798. But the numbers in hospital remain higher than the previous peak in April last year, at 29,326. 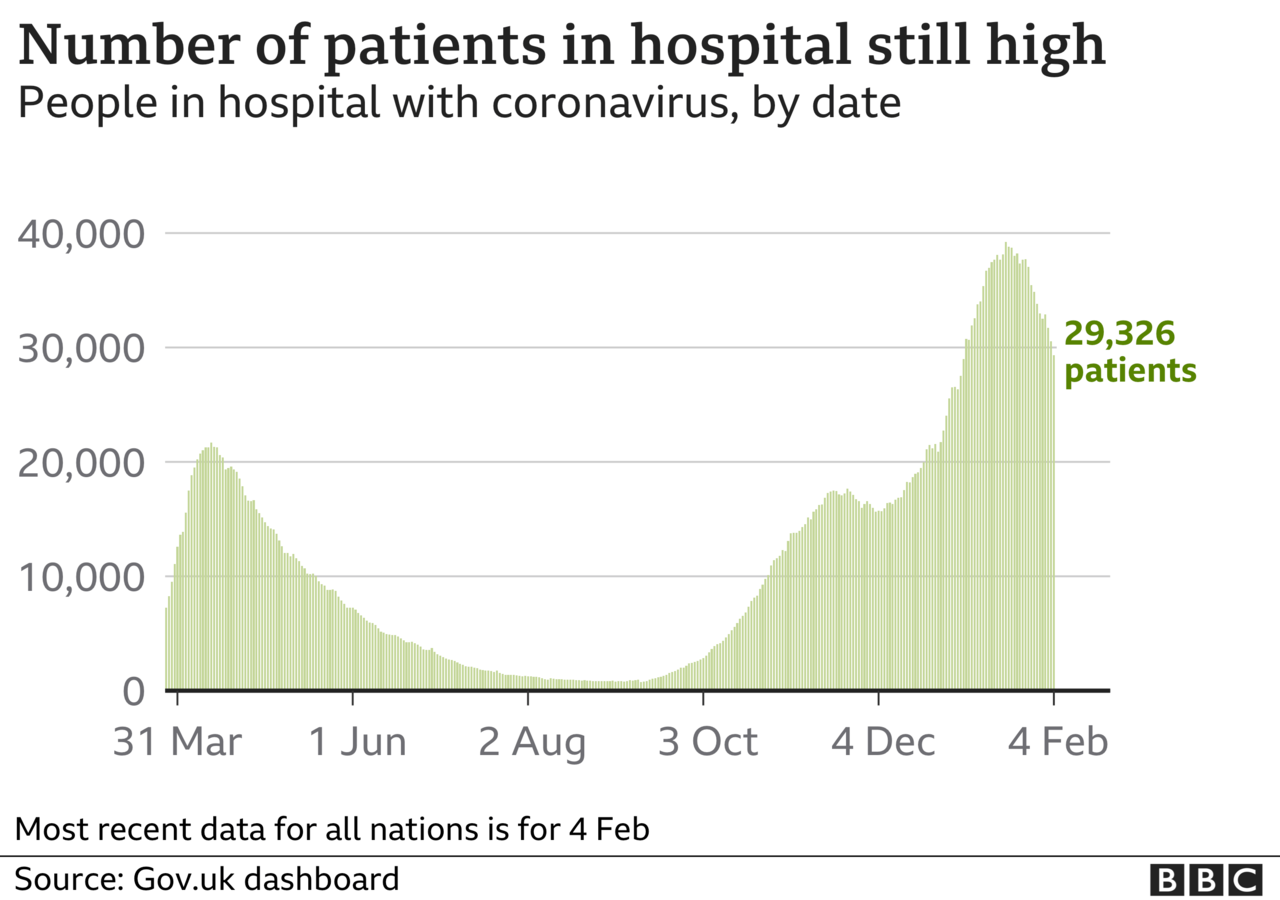 Mr Johnson said the vaccines "remain a massive benefit to our country" and he has "no doubt that vaccines generally are going to offer a way out".

"Yes we're doing everything we can to contain new variants but we're also increasingly confident that science, medicine, is gaining the upper hand over coronavirus and all its variants," he added.

Dr Katherine O'Brien, director of immunisation at the World Health Organization, said it was "really plausible" that the Oxford-AstraZeneca vaccine might still have a a "meaningful impact" on the South African variant, especially in preventing serious illness and death.

Health Secretary Matt Hancock said the NHS would issue booster jabs against variants if necessary, and had placed a new order for 50 million doses with vaccine company CureVac.

The deal is intended to rapidly develop vaccines, including using the mRNA technology already deployed by Pfizer-BioNTech and Moderna, in the UK "so we will be prepared for whatever the future might bring", Mr Hancock said.

Approving revised vaccines for booster shots would take "a matter of weeks rather than a matter of months", Prof Van-Tam added.

Mr Hancock also said the government had ordered 20 million more rapid tests so it could expand workplace testing to all businesses with more than 50 employees in sectors that are currently open.

Viruses mutate - so what is happening is not surprising.

The mutations seen in South Africa change the part of the virus that the vaccines target.

It means all the vaccines that have been produced so far are likely to be affected in some way.

Trials for Novavax and Janssen vaccines that were carried out in South Africa showed less effectiveness against this variant. Both are currently before the UK regulator.

Therefore the news about the Oxford-AstraZeneca does not come out of the blue.

The fact it now only has "minimal" effect according to reports is concerning - the other vaccines showed effectiveness in the region of 60% against the South African variant.

But we should be careful about rushing to judgement. The study was small so there is only limited confidence in the findings.

What is more, there is still hope the vaccine will prevent serious illness and hospitalisation.

What this once again illustrates is the pandemic is not going to end with one Big Bang. Vaccines are likely to have to change to keep pace with the virus.

Progress will be incremental. But vaccines are still the way out of this - and as things stand they remain very effective against the virus that is dominant in the UK.

In South Africa, where the variant - known as 501.V2 or B.1.351 - accounts for 90% of new coronavirus cases in the country, the rollout of the Oxford-AstraZeneca vaccine has been put on hold awaiting further advice.

Labour leader Sir Keir Starmer said the South Africa variant is the "single biggest risk" in the pandemic at the moment, but added that the government was taking too long to introduce controls at the border, "leaving a back door open at a vital stage in the battle against the virus".

Mr Johnson said border controls could play a greater role against new variants once infection rates are further reduced in the UK. 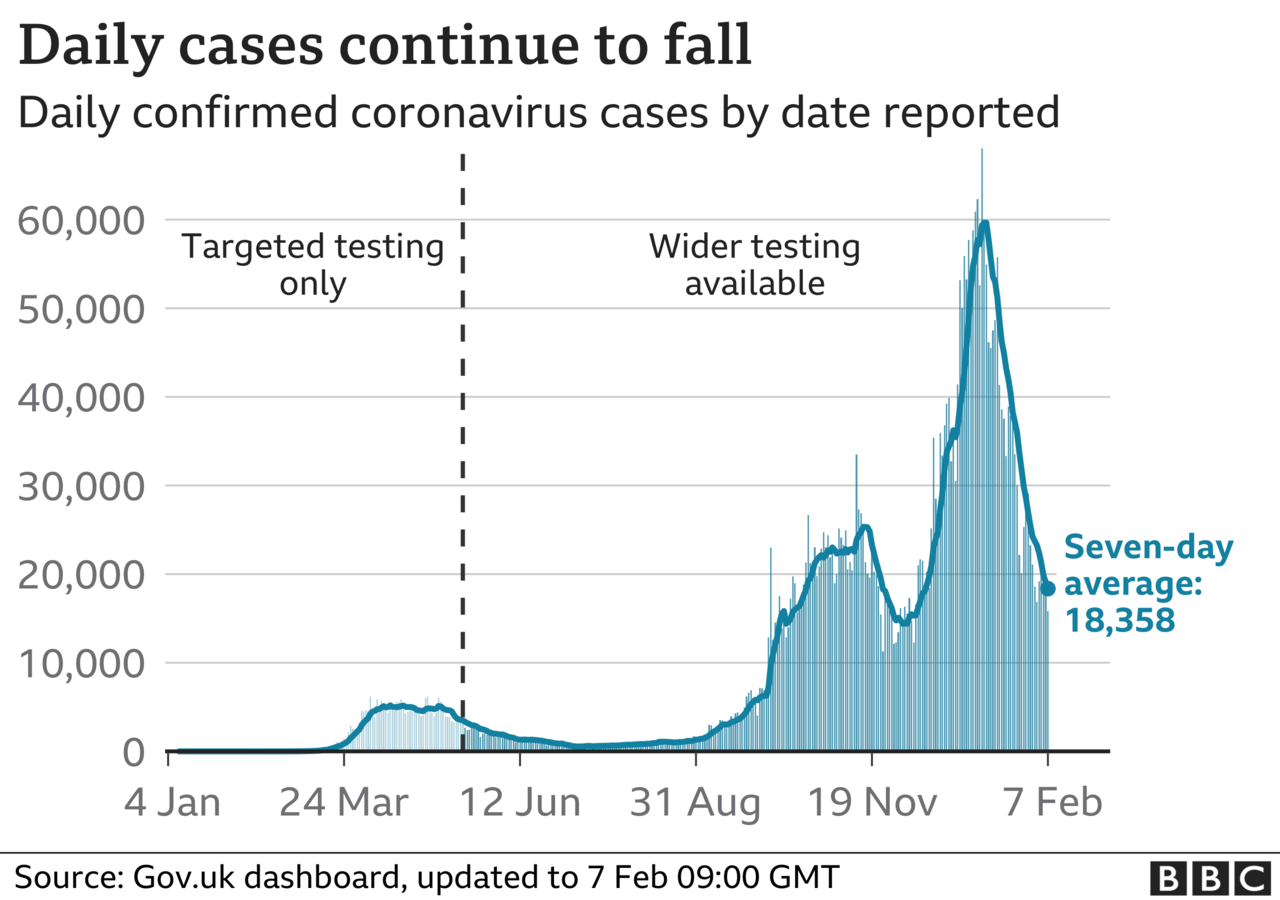 Dr Mike Tildesley, an infectious disease expert who advises the government, told BBC Radio 4's Today programme that "it's very possible" the South Africa variant could already be quite widespread in the UK.

The "surge testing" taking place in certain areas in England "really needs to be effective" to halt its spread, he said, but "sadly we may be in a similar situation to the Kent variant", which eventually spread across the whole country.

Additional surge testing is taking place in a number of areas in England where the South Africa variant has been found, including parts of Surrey, Bristol, London, Kent, Hertfordshire, Walsall, Gloucestershire and Worcestershire.

On Monday evening the Department of Health announced that surge testing would also be deployed in parts of the M14, M15 and M16 postcode areas in Manchester.

South Africa's suspension of the rollout of the vaccine is only "temporary" at this stage and the "context is a little bit different" to the UK where the Kent variant is the dominant strain, he added.

The new study of the Oxford-AstraZeneca jab, which has not yet been peer-reviewed, involved about 2,000 people who were on average 31 years old.

A spokesman for the pharmaceutical company said it had not yet been able to properly establish whether the jab would prevent severe disease and hospitalisation caused by the South Africa variant because those involved in the study had predominantly been young, healthy adults.

But the company expressed confidence the vaccine would offer protection against serious cases, because it created neutralising antibodies similar to those of other coronavirus vaccines.