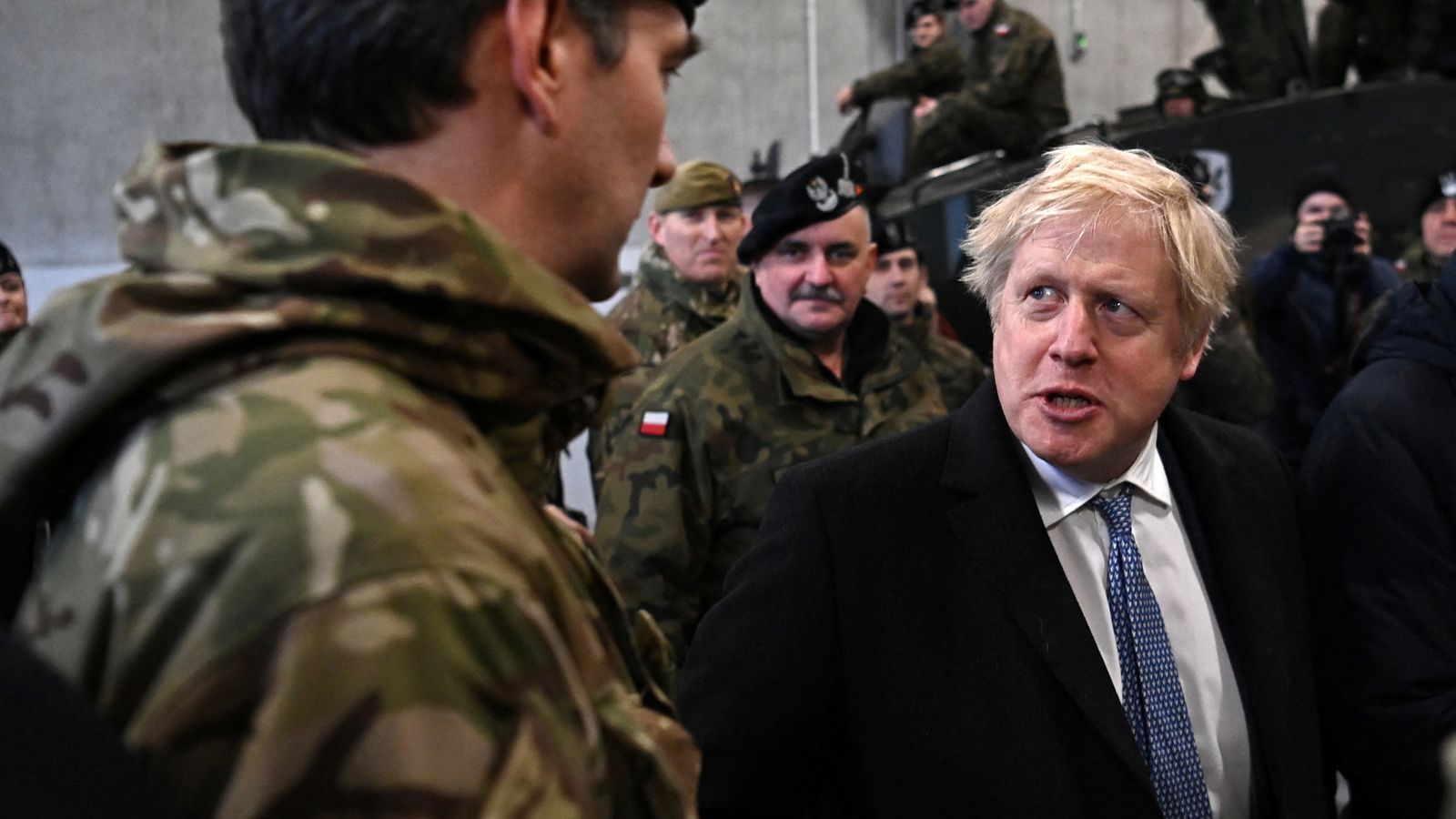 The prime minister is visiting both Belgium and Poland today as part of diplomatic efforts in the face of Russia's build-up of thousands of troops on the border with its neighbour.

Boris Johnson said the next few days are probably the "most dangerous moment" in the Ukraine-Russia crisis as he called on Vladimir Putin to disengage and pull his troops from the border.

As the prime minister visited Brussels and Poland in a show of solidarity for NATO allies over Ukraine, Russia's foreign secretary Sergei Lavrov claimed a meeting with his British counterpart Liz Truss in Moscow was a "conversation between deaf and dumb".

But the British foreign secretary, in Russia for diplomatic talks with the Kremlin as more Russian troops amass at Ukraine's border, denied she was "mute in our discussions".

"I put forward the UK's point of view on the current situation and the fact that as well as seeking to deter Russia from an invasion into Ukraine, we are also very resolute in pursuing the diplomatic path," she said.

"There is still time for Russia to end its aggression towards Ukraine and pursue the path of diplomacy. 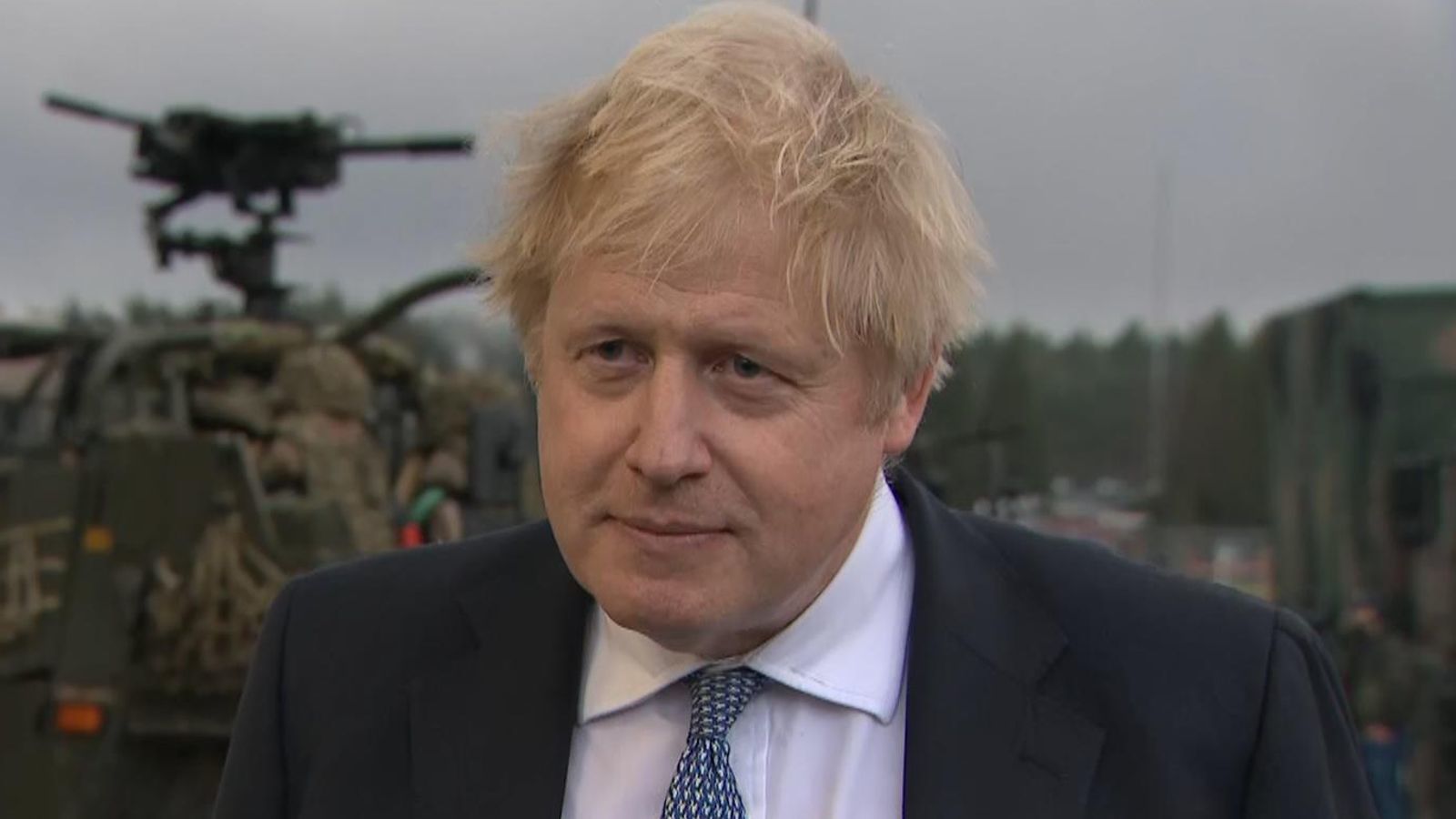 The PM has been in Belgium and Poland for talks

'One of worst European crises in decades'

"Vladimir Putin should understand if Russia wants less NATO on its eastern border this is entirely the wrong way to go about it," he said.

He added that NATO's efforts, including the UK providing more troops to train Ukrainian soldiers and 2,000 anti-tank missiles, are to "avert what could be one of the worst crises on our European continent in decades".

Earlier, holding a news briefing with NATO Secretary General Jens Stoltenberg in Brussels, the prime minister said it was "time to de-escalate" adding: "We must resist, we must oppose any return to the days when fates of nations are decided over their heads by a handful of great powers.

"I honestly don't think a decision has yet been taken but that doesn't mean that it's impossible that something absolutely disastrous could happen very soon indeed." 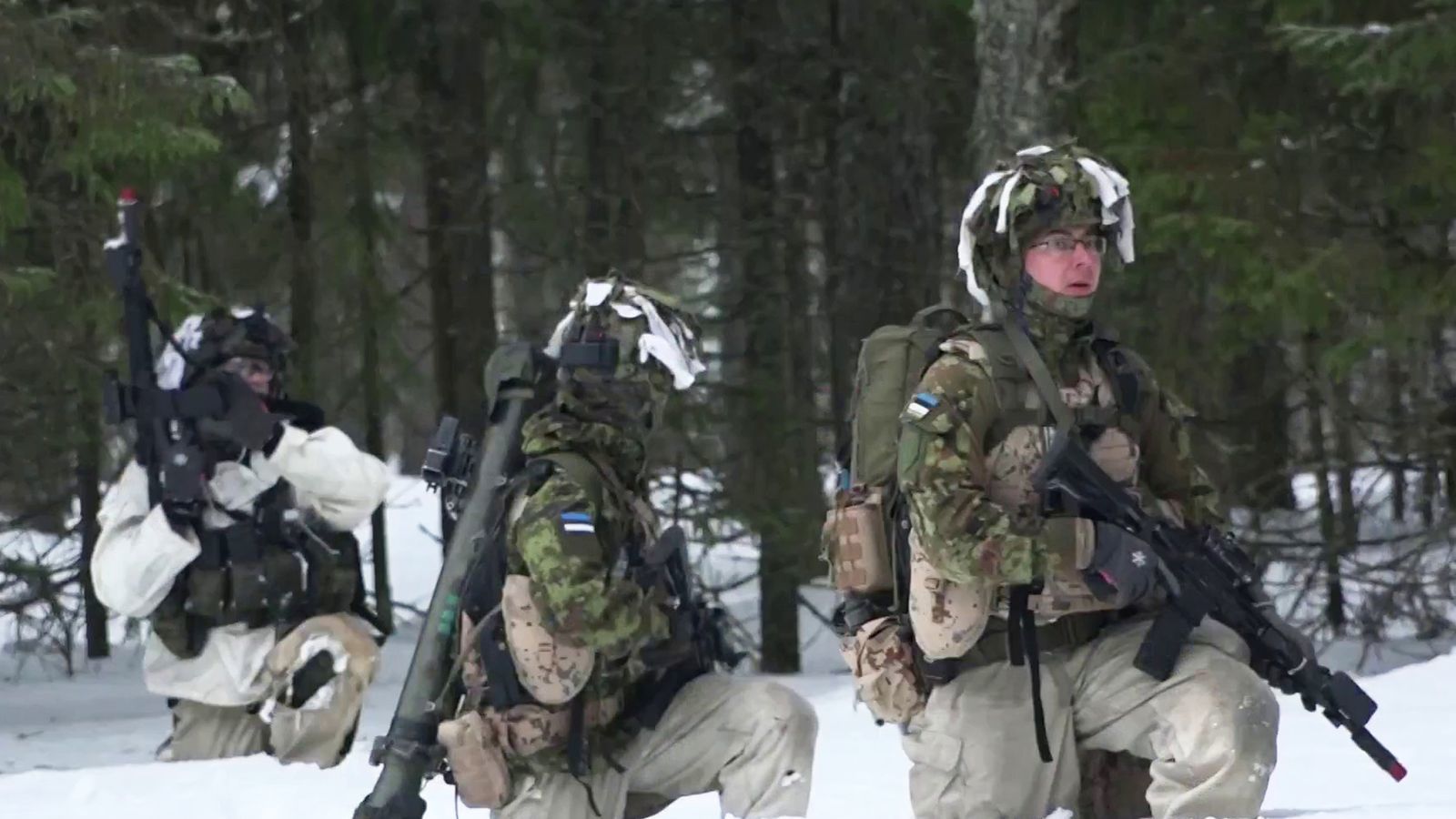 'Most dangerous moment' over next few days

Mr Johnson said British intelligence on Russia "remains grim" and there are "huge numbers" of Russian troops amassing on the Ukraine border.

"This is probably the most dangerous moment in the course of the next few days in what is the biggest security crisis Europe has faced for decades," he added.

Mr Johnson continued: "The stakes are very high and this is a very dangerous moment. At stake are the rules that protect every nation - big and small."

But he told broadcasters Britain's commitment to European security is "absolute and "immovable".

Mr Stoltenberg said he is "prepared to listen to Russia's concerns" but warned this is "a dangerous moment for European security".

But he added: "NATO will not compromise on core principles - the right of each nation to choose its own path and NATO's ability to protect and defend all allies." 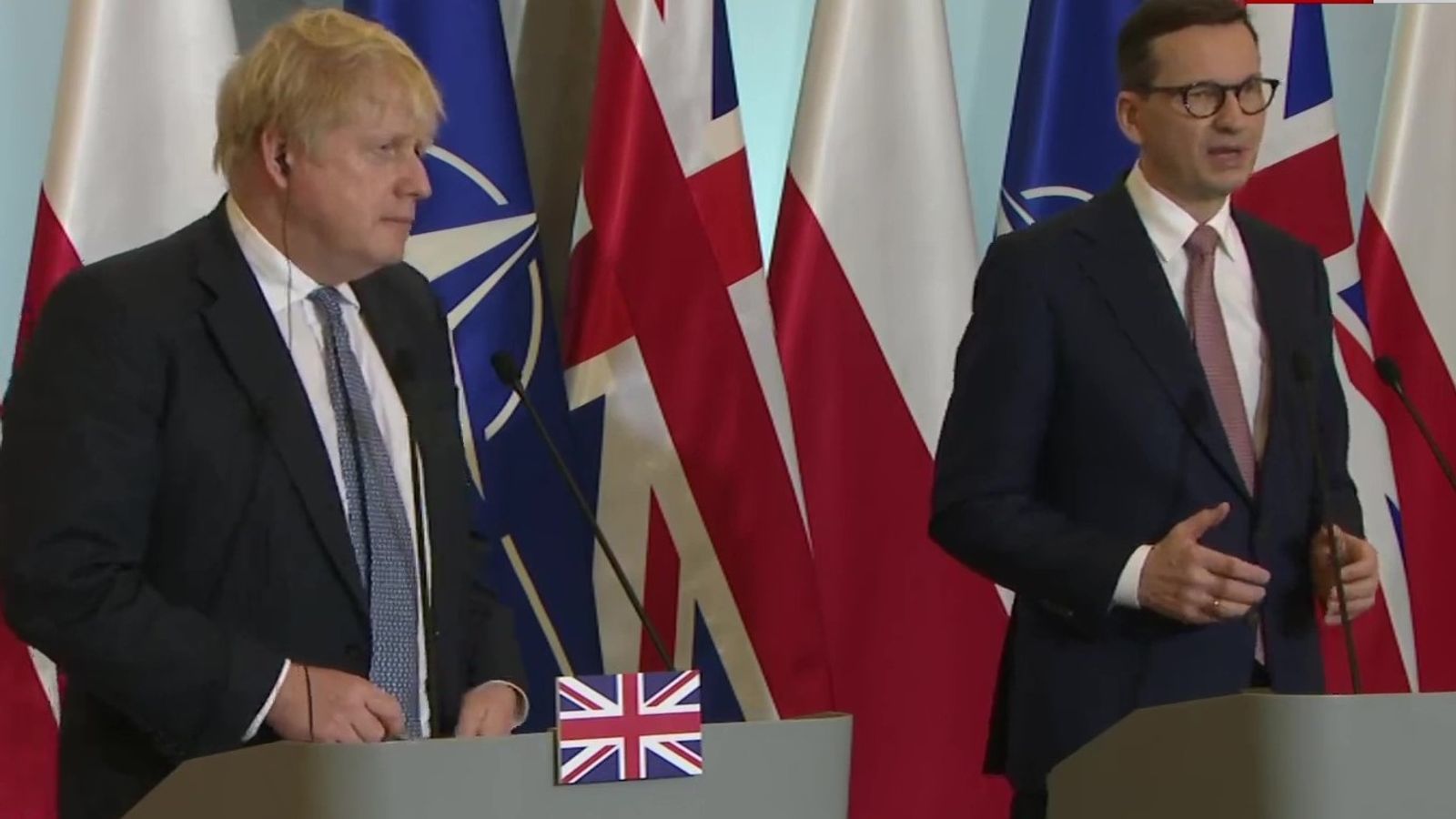 "Poland and the UK won't accept a world in which a powerful neighbour can bully or attack their neighbours," Mr Johnson said.

"We won't accept it because we believe all people have the right to live safely and choose who governs them and to decide what organisation they aspire to be members of or bodies they want to cease being part of.

"We will not budge on that." 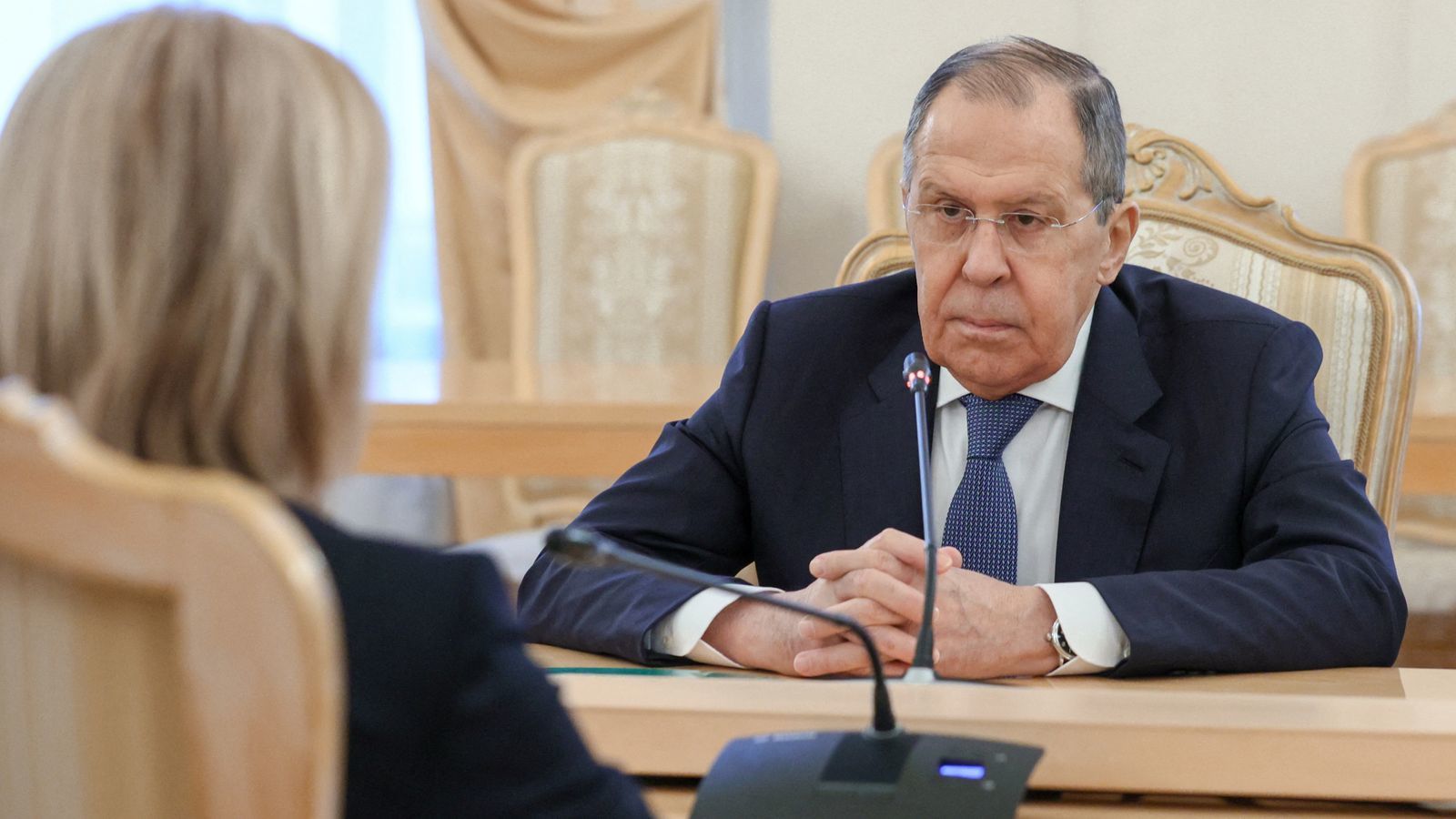 Mr Johnson recently offered to double the number of British troops on Europe's borders with Russia, as well as deploy more UK jets and ships to the region.

Asked at the news briefing whether he is confident the UK's action will be enough to ensure conflict does not break out, Mr Johnson said: "Whether we are going to be successful, I simply cannot say."

The prime minister did not rule out going further in giving Ukraine military support in the event of an invasion by Russia, but added that "at the moment we feel that this package is the right one".

The PM once more reiterated that it would be "an absolute disaster" if there was to be "bloodshed on Ukrainian soil", adding that war would be "a pointless, tragic and vastly economically costly to Russia". 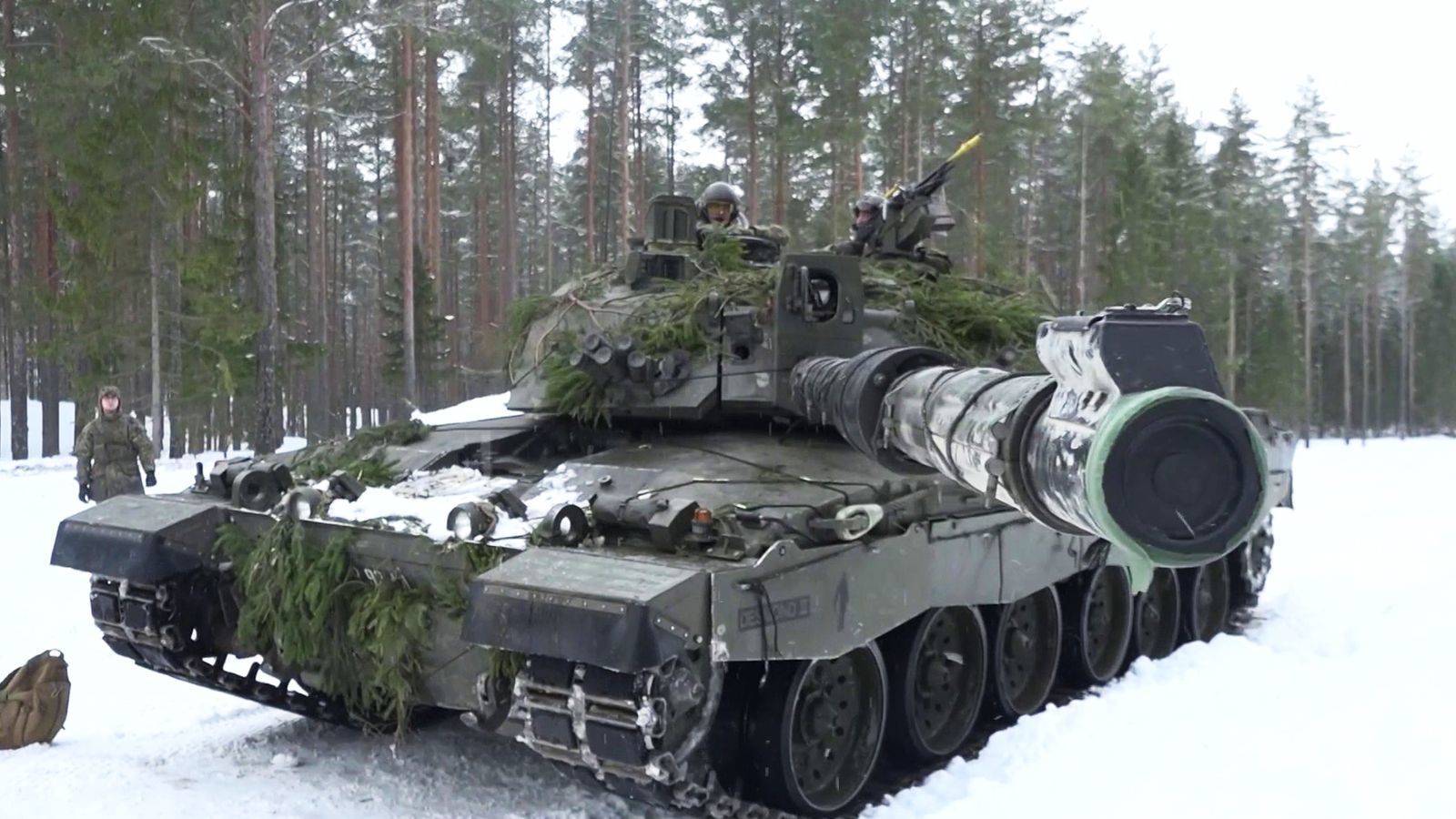 In Russia, Foreign Secretary Liz Truss warned her Russian counterpart Sergei Lavrov that a war in Ukraine would be "disastrous" and could lead to the UK introducing "severe sanctions" on Russian "individuals and institutions".

Foreign minister James Cleverly later confirmed in the Commons that preparations to allow the UK government to "toughen and expand" its sanctions against Russia will come into force "this afternoon".

Speaking at a news briefing in Moscow, Ms Truss warned Mr Lavrov that Russian's actions are "undermining" its position on the world stage and urged him to dial down the "Cold War rhetoric".

"The aggression by the Russian government and attempts to relitigate the past are seriously undermining Russia's international standing," she said.

Accusing Russia of "attempting to destabilise Ukrainian democracy" through "hybrid warfare and amassing over 100,000 troops on the border in a threatening manner", she added: "These acts have actually had the effect of strengthening NATO's resolve and turning the Ukrainian people further away from Russia."

The UK's foreign secretary said Mr Lavrov had told her that Russia has "no plans" to begin military action against Ukraine but said his words "must be followed up by actions".

Mr Lavrov said there needs to be "mutual respect" on both sides for the talks to progress.

Sergey Markov, a former adviser to Vladimir Putin and Director of Institute for Political Studies in Moscow, told Sky News the PM wants a "small war" in Europe to distract from his difficulties at home with partygate.

He also said British troops in central and eastern Europe were a symbol of the "aggressiveness of British foreign policy".

Ukraine's plans for future membership of NATO has been cited as one of the key reasons behind the current tensions between Moscow and the West.

Speaking about the Ukraine crisis, he said: "Nobody quite knows what Putin is going to do.

"I do know that what he wants to do, above all else, is to divide the allies - NATO and other allies - and we musn't be divided.

"That's why it's very important for me to be here at NATO today.

"It's also very important for me to make clear today, as part of my message, that we stand united in the United Kingdom.

"Whatever other challenges and arguments we have with the government, when it comes to Russian aggression we stand together as political parties."