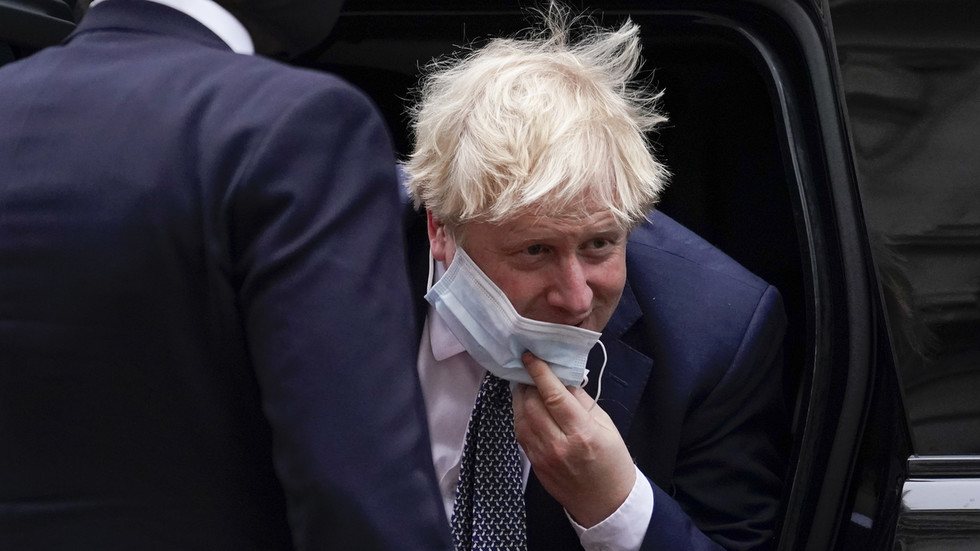 Up to 30 people took part in the celebrations in the Cabinet Room at 10 Downing Street on June 19, 2020, according to reports
The UK media has uncovered another gathering attended by British Prime Minister Boris Johnson in violation of his own Covid-19 curbs in 2020, with Downing Street confirming that the birthday party in question did take place.

Johnson’s wife, Carrie, had organized a surprise party for him in the Cabinet Room at 10 Downing Street on June 19, 2020, broadcaster ITV reported on Monday.

The event was attended by some 30 people, despite indoor gatherings being banned in the UK at that time as part of anti-coronavirus measures. There was a cake, and Carrie allegedly led those gathered in singing happy birthday to the PM.

Some officials who were present at the gathering have denied ITV’s claim of 30 people being in attendance. Transport Secretary Grant Shapps told the BBC that the group was much smaller and that it had been working together all day. Environment Secretary George Eustice said the number of those present was “closer to ten,” adding that the whole event “was literally just a birthday cake brought in at the end of the day.”

The birthday gathering at 10 Downing Street took place just hours after Johnson visited a school in Hertfordshire, where he had posed with his arms outstretched with students to again underline the importance of social distancing to the British public.

And it wasn’t the PM’s only party that day, according to ITV, with a separate birthday celebration for family and friends being held at Johnson's residence in the evening.

Downing Street has confirmed that the prime minister attended an event at work, with a government spokesperson insisting “he was there for less than ten minutes.”

“A group of staff working in No. 10 that day gathered briefly in the Cabinet Room, after a meeting, to wish the prime minister a happy birthday.”

However, the spokesperson denied claims of a second gathering at Johnson’s apartment, saying: “This is totally untrue. In line with the rules at the time, the prime minister hosted a small number of family members outside that evening.”

The British PM is facing mounting calls to resign amid recent revelations of him taking part in a string of parties during the first lockdown in the UK. The so-called ‘Partygate’ scandal has seen the 57-year-old’s ratings plummeting, with a poll earlier this month suggesting that two-thirds of voters want him out of office.

MPs from within Johnson’s own Conservative Party also seem to be losing faith in the prime minister, with one telling the Guardian that the gathering on June 19 was “clearly social” and “changes things – a lot.”

Another unnamed Tory lawmaker said that “presumably there is more being stored up for release after the Gray report, just in case that hadn't dealt the killer blow.”

He was referring to a crucial report by senior civil servant Sue Gray, who is investigating the alleged breaches of lockdown regulations by the prime minister, that is expected be released this week.
#Boris Johnson  #Coronavirus  #COVID-19  #Johnson  #Covid
Add Comment