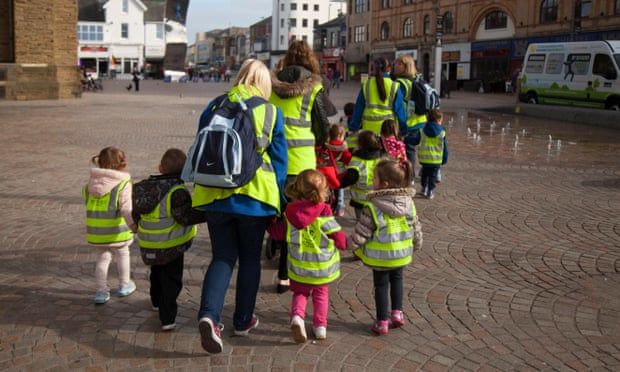 Policies include reviewing nursery ratios of staff per child and extending MOT validity to two years
Boris Johnson is pushing to cut the cost of childcare by allowing nurseries in England to take in more toddlers without employing extra staff, as part of plans to relax health and safety rules to ease the cost of living.

At a cabinet brainstorming session on reducing living costs, Johnson was on board with the idea of reviewing nursery ratios of staff to children, while Grant Shapps, the transport secretary, suggested pushing MOTs to once every two years, rather than one. Other ideas floated included scrapping tariffs for food imports, and scrapping net zero commitments.

According to one source, Johnson asked to speed up a review of childcare costs, which has been looking at how many children each adult can supervise. A cabinet source said Nadhim Zahawi, the education secretary, was looking at bringing England more into line with Scotland, which has looser ratios for two-year-olds.

At the same meeting, Shapps raised the idea of relaxing MOT rules that govern the roadworthiness of vehicles. He suggested allowing the safety checks every two years rather than every year to save motorists money, after there was previously an extension of six months during the pandemic.

The meeting was held after Johnson called on his cabinet to think of ways of reducing the cost of living crisis – just weeks after Rishi Sunak’s spring statement, which was criticised over its lack of help for families. However, they were warned that there would be no extra money and asked to come up with “non-fiscal” solutions.

Sunak “underlined the importance of not feeding in to further inflation rises and emphasised that the UK is currently spending £80bn servicing our debt”, No 10 said. The prime minister will look at the options when he chairs a “domestic and economic strategy committee” in the coming weeks.

Both Labour and the Lib Dems accused the government of planning to compromise child safety. Bridget Phillipson, the shadow education secretary, said: “The Conservatives are making high quality childcare increasingly unavailable and unaffordable … Now the government’s solution is to drive down quality while making no difference to availability.”

Munira Wilson, the Lib Dem education spokesperson added: “Boris Johnson’s new plan is not to address this issue head on, but instead to cut corners and endanger our children. Their safety should be our number one priority, not be reduced to a cost-cutting measure.”

It also comes as the cabinet is facing splits over No 10 and Jacob Rees-Mogg’s approach to trying to force civil servants back into the office. At least two cabinet ministers are known to be sceptical of Rees-Mogg’s confrontational approach of leaving notes on civil servants’ desks when they are seen to be not in the office, in addition to Nadine Dorries, the culture secretary, who said the move was “Dickensian”.

The lack of enthusiasm for Rees-Mogg’s crusade to get civil servants back to “pre-pandemic working” is also evident at ministerial level. One senior minister and usual Johnson loyalist said No 10’s combative attitude towards the civil service made no sense, saying: “Don’t pick a fight with the civil service as they will find a way to fuck you over.” They said their department was committed to trusting civil servants to find a balance and work flexibly.

One cabinet source said the “finger-wagging” approach was not as successful as setting clear flexible working guidance, while another said their department’s tactics were “encouragement” and an “upbeat approach”.

The Guardian reported on Monday that Simon Case, the cabinet secretary, and at least four permanent secretaries are among those who have raised concerns about Rees-Mogg’s approach.

Johnson also criticised “post-Covid mañana culture” in the workplace during Tuesday’s cabinet meeting, later telling TalkTV: “I did use those words, I didn’t necessarily use them about any particular institution, but I think we have a general issue in some of our approaches to public services, and perhaps more widely, that we all got used to working from home, to Zoom calls, to thinking that we could do business like that.

“I think for many people it is great, I don’t want to minimise the value of this … But I have to ask myself, I’m the custodian of the public purse and I’m looking at how much we’re taking and how much we’re spending, whether actually it is as productive.”
#Boris Johnson  #Johnson  #Covid
Add Comment