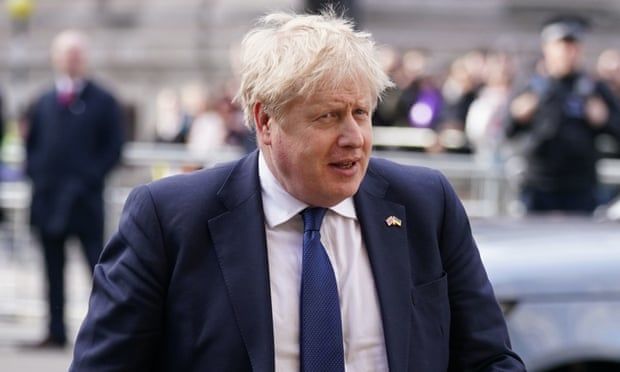 MPs voice deep concerns over trip after mass execution by regime and its continuing role in Yemen war
Boris Johnson is facing scrutiny over a planned trip to Saudi Arabia to push for an increase in oil output amid an outcry over the regime’s biggest ever mass execution and growing fears the prime minister may try to limit media scrutiny of the visit.

Downing Street would not confirm Johnson’s likely trip to Riyadh, but sources have said he wants to appeal to the Gulf state to increase its oil output to replace supplies from Russia.

MPs registered their deep concern after Saudi Arabia’s execution of 81 men on Saturday. Crispin Blunt, a backbench Conservative MP, secured an urgent question in the House of Commons, saying it represented “a new low for human rights and criminal justice in the kingdom, only a week after the crown prince had promised to modernise its justice system.”

Julian Lewis, the Tory chair of the Commons intelligence and security committee, called on the government to make sure that in seeking to replace energy from Russia with oil from Saudi Arabia it did not create a “dependency on another unreliable and sometimes hostile regime.”

Johnson’s official spokesperson said: “The UK is firmly opposed to the death penalty in all circumstances, in every country, as a matter of principle, and we routinely raise human rights issues with other countries including Saudi Arabia and will be raising Saturday’s executions with the government in Riyadh.”

There are also human rights concerns over Saudi Arabia’s role in the war in Yemen, after years of leading a coalition against Iran-backed rebels. More than a dozen UN agencies and international aid groups said on Monday that 161,000 people in the war-torn country were likely to experience famine over the second half of the year –– a fivefold increase.

Opposition MPs were even more critical of Johnson’s plans to visit Riyadh. Alistair Carmichael, the Lib Dem home affairs spokesperson, said: “If the prime minister goes in the next few days to Saudi Arabia, we will be sending a very clear signal that we are not that bothered about this kind of thing.”

Labour’s Nadia Whittome highlighted that the UK had licensed £2bn in arms sales to Saudi Arabia since the beginning of the war in Yemen and called on Johnson to end those sales as well as cancelling the visit.

The Green MP, Caroline Lucas, said the government must see the “contradiction” in moving away from Russian oil to go “cap in hand to another murderous tyrant who executes his own people” and asked the government to rule out a “more arms for oil” deal with the kingdom.

Despite No 10 insisting that the prime minister would take the opportunity to raise the issue of human rights, it appears Johnson is unlikely to allow open access to the media on any planned trip.

Prime ministers have traditionally always allowed UK journalists to accompany them when they travel abroad to meet foreign leaders on overnight stays. But it is expected that any trip by Johnson will be limited to one broadcaster and one journalist from the newswires, known as the “pool”. This has been the arrangement for numerous trips that he has taken to European capitals in recent weeks.

Theresa May and Gordon Brown both took journalists during very short visits to Saudi Arabia, raising the prospect that No 10 may be trying to set a new precedent in terms of transparency and media scrutiny.

Johnson has long had a personal relationship with the Saudi crown prince, Mohammed bin Salman. In 2018, as foreign secretary, he wrote that Prince Mohammed was a reformer who “deserves our support,” adding: “I believe that the crown prince, who is only 32, has demonstrated by word and deed that he aims to guide Saudi Arabia in a more open direction.”

That was just six months before the murder of the Washington Post journalist Jamal Khashoggi, which US intelligence agencies have since concluded was approved by Prince Mohammed. As a backbencher, Johnson accepted a £14,000 trip to Saudi Arabia from the country’s foreign affairs ministry only a few days before Khashoggi was brutally murdered in the country’s consulate in Istanbul.

Last year the crown prince was revealed to have texted Johnson personally to ask him to intervene to “correct” the Premier League’s “wrong” decision not to allow a £300m takeover of Newcastle United by a Saudi-led consortium.

Johnson asked Edward Lister, the then special envoy for the Gulf, to take up the issue, and Lord Lister reportedly told the prime minister: “I’m on the case. I will investigate.” The government did not have the power to prevent a Premier League decision but the deal eventually went through after undertakings that the Saudi government would not control the club.

Johnson has been focusing on the impending energy crisis in recent days, holding roundtable talks with oil and gas producers on Monday to discuss ways to increase production in the North Sea.

The Treasury has repeatedly ruled out a windfall tax on the companies despite them benefiting from higher oil prices, as the government wants to encourage them to invest more in extraction.
#Jamal Khashoggi  #Boris Johnson  #Johnson
Add Comment