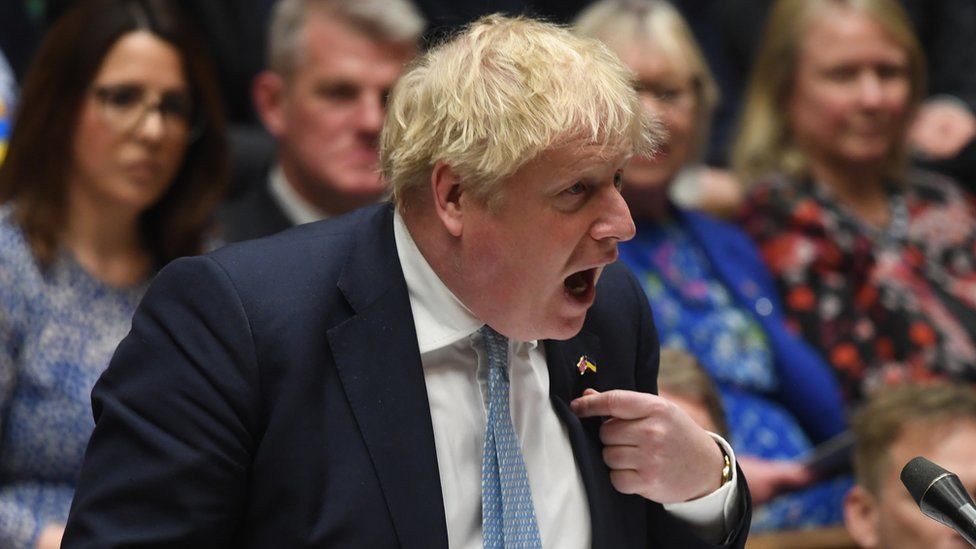 Boris Johnson must resign over lawbreaking at No 10 - Starmer

Boris Johnson must resign as prime minister over "widespread criminality" in Downing Street during lockdown, Sir Keir Starmer has said.

It comes after the Metropolitan Police said the first 20 fines for Covid rule-breaking at parties are to be issued.

Mr Johnson said the police must be allowed to get on with their investigations.

"In the meantime," he added, "we are getting on with our job," which he said was tackling cost of living pressures and energy supplies.

It is not known if Mr Johnson is among those who have been fined, but quizzed about it later at a Commons committee, he said: "I am sure you would know if I were."

He refused to admit that laws had been broken, despite his deputy Dominic Raab saying earlier that it was clear that the law had been broken and that Mr Johnson "accepts responsibility" for what happened.

Asked by the SNP's Pete Wishart if he accepted criminality had taken place, and if he would resign, he said: "I won't give a running commentary on an ongoing investigation."

At Prime Minister's Questions, Mr Johnson faced shouts of "resign" from opposition MPs, as he was quizzed about Partygate.

Sir Keir said: "He told the House no rules were broken in Downing Street during lockdown. The police have now concluded there was widespread criminality.

"The ministerial code says that ministers who knowingly mislead the House should resign. Why's he still here?"

Mr Johnson replied: "Hang on a minute, we do at least expect some consistency from this human weathervane - it was only a week or so ago he was saying that I shouldn't resign. What is his position?"

Earlier this month, Sir Keir gave an interview to Sky News in which he said he still thought the prime minister had "lost the moral authority to lead" but his "total focus" at the moment was on the war in Ukraine. Labour said Sir Keir had never withdrawn his call for Mr Johnson to resign over Partygate, and had not changed his position.

At Prime Minister's Questions, Sir Keir said the PM was either "trashing the ministerial code or he's claiming he was repeatedly lied to by his own advisers, that he didn't know what was going on in his own house and his own office".

He added: "Come off it. He really does think it's one rule for him and another rule for everyone else, that he can pass off criminality in his office and ask others to follow the law."

Mr Johnson insisted Mr Sunak's changes to National Insurance thresholds and a cut to fuel duty added up to a tax cut for most workers.

The Liberal Democrats and the SNP are also calling for the PM to quit over Downing Street parties held in the pandemic.

The SNP's leader at Westminster Ian Blackford seized on a dinner for Conservative MPs at a London hotel on Tuesday night, at which the prime minister gave a rallying speech.

"We all know that the Tories partied during lockdown and now they're partying through the cost of living emergency," he said.

The Metropolitan Police have been investigating 12 events, including at least three attended by Mr Johnson.

The force have sent out more than 100 questionnaires to ask about people's participation in the events, and 20 fixed penalty notices for Covid rule-breaking have been issued by post, with more expected to follow.

Mr Johnson previously told the House of Commons that Covid guidelines had been followed in Downing Street "at all times".