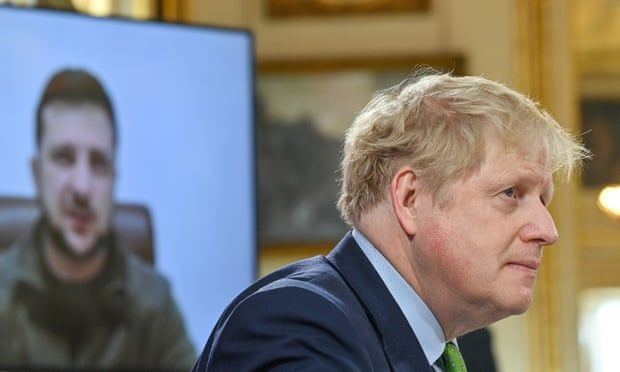 It was reported at the weekend that Johnson wanted to go to Kyiv but on Monday No 10 sources indicated this is unlikely to happen.

The UN’s refugee agency says about 3.5 million people have fled Ukraine since the invasion began, with millions more forced out their homes remaining in the country.

Oliver Dowden, who is also a minister without portfolio in the government, told Andrew Marr on LBC Radio on Monday evening: “Well, I think the prime minister is desperate to go to Ukraine and has throughout this conflict felt a real – as the British people have done – a real emotional connection with the suffering of the Ukrainian people and a need for the west to unite in standing up to this threat from Russia which has been exposed to Ukraine.

“And actually, for example, with the bazookas that are currently being fired in Ukraine, people are saying ‘God Save the Queen’, because they know that it was the British that were leading that effort.”

Asked what the point of going in person would be, Dowden said: “Well I think it’s both to see what’s going on the ground – because it’s very different talking to somebody on the phone versus actually seeing it in practice, and by the way, I should say that no decisions have been taken in relation to this – but then secondly, it’s actually to experience what is happening there, to see what is happening. To the people on the ground. I think that is very different to just speaking remotely.”

On Sunday, eight people were killed in Kyiv when a shopping centre was hit. The latest Ministry of Defence assessment says the Russian advance on the capital remains stalled in the face of determined Ukrainian resistance.

The bulk of Moscow’s forces are believed to be still more than 15 miles from the centre. Analysts believe the capital is still the Kremlin’s main military objective, although it is thought the Russians will try to force it into submission through encirclement rather than attempting a direct assault.
#Boris Johnson  #Johnson
Add Comment