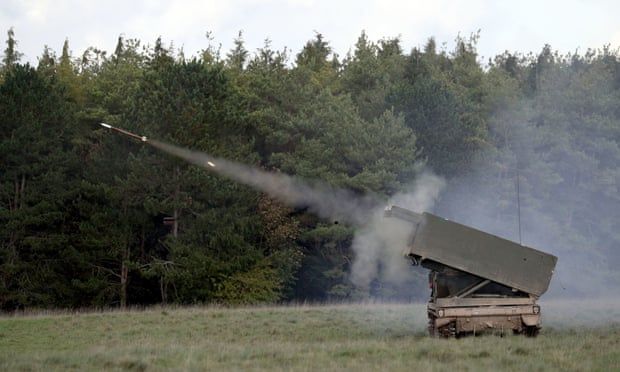 But the prime minister stopped short of committing the UK to sending the powerful M270 rocket system, which Kyiv has been pleading for from Britain, the US and other Nato members for several weeks.

Johnson said the MLRS would enable Ukraine “to defend themselves against this very brutal Russian artillery, and that’s where the world needs to go” in an interview with Bloomberg Television.

He added that Putin’s forces were “continuing to chew through ground” in the Donbas region, making “slow, but I’m afraid palpable, progress” as they close in on Sievierodonetsk, the easternmost city held by Ukraine.

Johnson’s comments appear to confirm that there has been a significant change of stance over the weapons among western nations.

The US previously rejected Ukraine’s request for the long-range rockets but overnight, briefings suggested that the White House was now willing to supply them. An announcement could come next week, CNN reported, for a weapon that could have a significant impact on the fighting.

Far more powerful than conventional artillery, M270 MLRS rockets have a maximum range of more than 100 miles (165km) and up to 12 projectiles a minute can be fired from an armoured vehicle. Their firepower goes far beyond the original commitment made by Nato members to only send “defensive systems” to Ukraine when the war began.

The British M270 has a range of 52 miles although 44 of the army’s stock are being upgraded to 93 miles. Ukraine’s existing conventional artillery has a maximum range of roughly 15 miles, including the M177 howitzers supplied by the US army to help fend off the Russians in Donbas.

The surface-to-surface rockets are made by Lockheed Martin and have been bought by the US, UK and nearly 30 other countries. Some smaller countries had been willing to send MLRS weapons via larger third countries, but to the frustration of the Ukrainians the larger nations had not been willing to go ahead.

Kira Rudik, a Ukrainian MP with the centrist Golos party, said on a visit to the UK that Ukraine was in need of more powerful arms. “There’s this discussion of getting us more MLRS systems. I know that the British government is right now deciding on if they can get to us from the United Kingdom and that will be fantastic. That is something that we exactly need right now,” she said.
#Boris Johnson  #Johnson
Add Comment