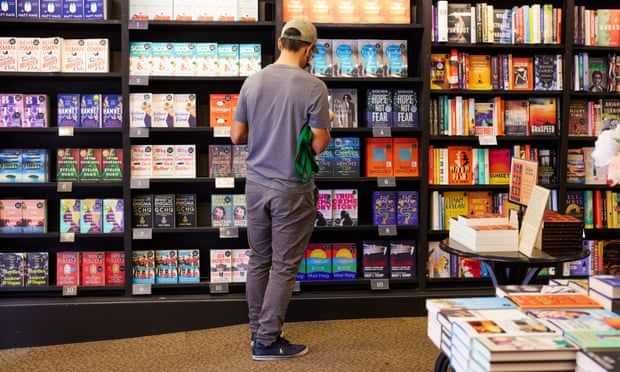 Shops build up stocks early to offset bottlenecks as publishers warn Brexit and pandemic are delaying distribution
Publishers and retailers have warned of potential delays on Christmas books as the shortage of lorry drivers affects deliveries.

Waterstones, the UK’s biggest high street bookseller, said it had upped stocks of books by a quarter and ordered early to try to offset distribution problems as several publishers admitted that deliveries were under strain.

“We will have shops fuller than ever before to make sure we don’t get caught by logistics problems as we did last year,” said James Daunt, who also runs Foyles, Daunt Books in the UK and Barnes & Noble in the US.

But he said that the longer lead times on books, particularly those printed abroad, could cause problems later in the year. “My concern is that at the beginning of December if we need 50,000 copies of whatever [unforeseen literary hit] and it’s not there.”

On Amazon, Richard Osman’s new book, The Man Who Died Twice, which is due out on 16 September, celebrity parish council clerk Jackie Weaver’s book You Do Have the Authority Here! and MOB Kitchen’s latest title Comfort MOB, were all unavailable for delivery on their September launch date. The site warned that Osman’s book could not be delivered until just over a week after launch day.

Ben Lebus, the cook and founder of MOB Kitchen, said in an Instagram post on 3 September, the day after Comfort MOB’s launch: “There is a lot of stock on its way to Amazon, but due to various delivery issues (labour shortages impacted by Covid) some of you may not receive your books on time.” He said the book was available at other retailers.

The publishers Penguin Random House, Hachette UK and HarperCollins have all acknowledged distribution difficulties across the industry which had forced businesses to stock up early.

Nigel Newton, the chief executive of Bloomsbury Publishing, the company behind the Harry Potter books, also flagged up delays. “The cocktail of the Brexit and Covid-driven driver exodus occurring against an upswing in consumer demand plus the equally pressing problem of sea-freight capacity shortages mean that our crystal ball finds it difficult to say how long delivery delays will last,” he said.

He said the company had been able to minimise the problem by managing demand for its books and a number of other measures, including being flexible about where they were printed.

“The entire UK supply chain is seeing major disruptions as a result of both Brexit and the pandemic, which are being felt across all industries,” a spokesperson for Penguin Random House told The Bookseller trade journal.

Lesley O’Mara, of publisher Michael O’Mara, said it had not yet put publication dates back but added: “All publishers are trying to get books in early just in case [there are delays] so printers and the warehouse are struggling to keep up.” She said retail price rises were inevitable next year as costs had risen substantially.