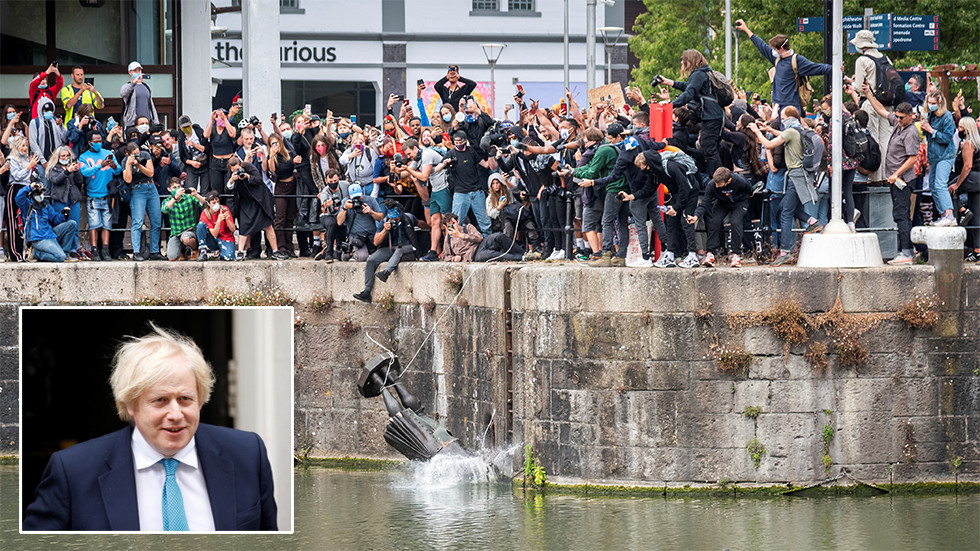 British PM Boris Johnson says he wouldn’t want to see fans banned from singing the England rugby union anthem ‘Swing Low, Sweet Chariot’, and that people should focus more on the substance and less on the symbols of racism.

During an interview with Sky News on Friday, Johnson was asked whether he had “strong views” on ‘Swing Low, Sweet Chariot’ – the iconic song bellowed out by English rugby union fans at stadiums. The anthem is currently being reviewed by the Rugby Football Union due to its links to slavery.

Johnson said he was against “any sort of prohibition on singing” the song and insisted that the removal of offensive symbols such as statues, seen in many places over the last few weeks, was not the answer to rooting out racism in Britain.

The prime minister stated that people needed to “focus less on the symbols of discrimination” and more on “the substance of the issue.”

PM Boris Johnson is asked if he has "strong views" on the song 'Swing Low, Sweet Chariot'.

He says people should focus "less on the symbols of discrimination" and more "on the substance of the issue."

The lyrics to ‘Swing Low, Sweet Chariot,’ written in the second half of the 19th century by Wallis Willis, a freed black slave in what is now Choctaw County in Oklahoma, originally had nothing to do with rugby or any sports at all.

A political storm around the rights and wrongs of tearing down statues of figures linked to slavery or racist policies has swept Britain, prompted by the downing of 17th century slave trader Edward Colston’s monument in Bristol in early June.

“Topple the Racists” – a website run by the “Stop Trump Coalition” with support from the “Black Lives Matter” campaign – was launched soon after, with the objective to “take down statues and monuments in the UK that celebrate slavery and racism.”

The group provided a map with the locations of the offending monuments to be toppled, including that of a former PM who oversaw the abolition of slavery. It was shared by British Guardian journalist Owen Jones, who was roundly ridiculed by critics on social media for doing so.

The fierce debate on racist symbols in Britain comes against a backdrop of anti-racism protests around the world, provoked by the brutal killing of 46-year-old African American George Floyd while in police custody in Minneapolis in May.

The protests – led by the Black Lives Matter movement – have faced counter demonstrations by right-wing groups in Britain, who say they want to defend historic statues such as that of Winston Churchill – which was defaced by anti-racism activists in London.