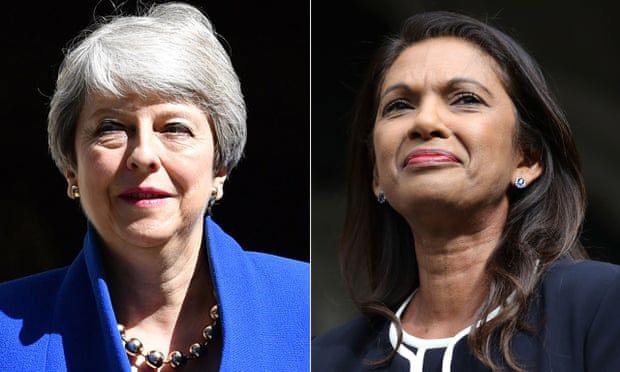 They were both called “bloody difficult women”. Yet a play opening in London in the new year will portray Theresa May and the anti-Brexit activist Gina Miller as having more in common than stubbornness.

Bloody Difficult Women will even suggest that their similar characteristics and experiences – both are diligently hard workers and share a love of cricket – could have made them friends if they had not been political opponents over parliament’s say over Britain’s withdrawal from the EU.

“It’s a psychological human drama about idealism, obsession and delusion,” says playwright Tim Walker. “A tragedy too, certainly for May, and one about enormous pressures and personal threats for Miller.”

Wealthy businesswoman Miller was born in British Guyana and moved to the UK aged 10. In 2016 she decided to take the government to court over Article 50, the UK’s EU exit clause. “I was furious about people seeing themselves as being above the law by trying to bypass parliament,” she says.

Yet, as the drama spells out, while campaigning she experienced hideous abuse – some of it racist (“go back to where you come from” was a regular refrain) and some sexist. Death threats were so severe she had to hire private protection. “We also put cameras around the house and installed panic buttons. And I had to have cease-and-desist letters sent to eight individuals.”

The play depicts May being advised by two fictional civil servants (Rosen and Guilden – names inspired by Hamlet’s friends Rosencrantz and Guildenstern) with the younger Guilden eventually resigning because of their Remainer beliefs. Miller, on the other hand, is advised by her third husband, Alan.

In a scene midway through the play, the two women address the audience. “When a man takes a stand on something, he is seen as a maverick,” declares Miller. “But a woman doing this is considered mad.”

May responds: “Women are not allowed to complain. If we do, we are whiny and hysterical.” She adds that “if a man messes up, he can shrug his shoulders, hum a little tune and walk away”. This is a reference to the resignation speech David Cameron made outside 10 Downing Street in June 2016.

Miller then says that “a lot of men hate me”; May responds with the same words, before adding, “But I have to keep going.”

Walker, a former Observer journalist who is now theatre critic for the New European, says that this is not “a Brexit play but an episode of Brexit captured in microcosm through a drama centring on two very driven women”. 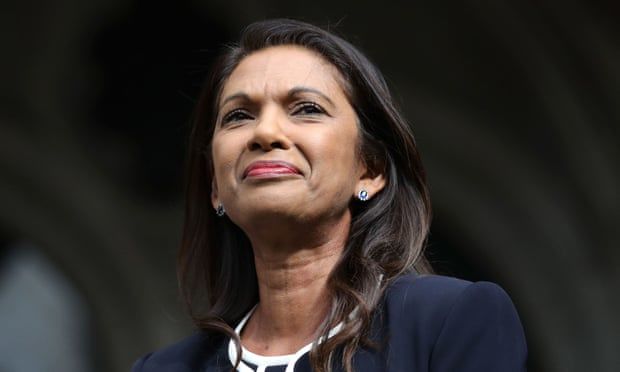 Gina Miller was subjected to a tirade of racist abuse.

There is a third main character in the play: Paul Dacre, then the hugely powerful editor of the Daily Mail, who is the real villain of the piece. He opines: “Miller is a rich woman, who did not even come from here and yet she is trying to obfuscate the will of our people.” Dacre promises his support over Brexit to May, but warns her that she had better deliver.

The foul-mouthed Dacre rants to staff about “keep making the point that Miller is foreign-born. And use the most awful photos of her.”

Miller, at the receiving end of other abuse from the Mail including suggestions from some Brexiters that she “should be burned at the stake”, suffered even more from follow-up attacks online. “But I got nowhere complaining to the paper or the newspaper regulator.”

There is a key scene after the judges rule for Miller that parliament must have its say over leaving the EU. “This is the judges versus the people,” Dacre proclaims before demanding the now infamous “Enemies of the people” story, in which the Mail singled out the judiciary for defying its wishes. According to the play, this was a step too far for the Mail’s owner, Lord Rothermere, who, 18 months later, removed Dacre as editor.

As Miller puts it on stage: “Dacre set out to break me, but I broke him.”

Walker, who has known Miller for nearly a decade, did not tell her he was writing his play, although she has now read it – if only to check for factual errors. May’s office has also now been told about the drama, but has not responded.

“When May was up against Miller, she was already trapped by her own personality into not listening to some of the wise people in parliament,” argues the historian Anthony Seldon, who has penned a biography of May. “And yet May really knew Miller was right – all the more since she respected parliament. But she had also been influenced by the only other British female prime minister, Margaret Thatcher, that ‘you don’t turn’ as it is a weakness. The irony was that Brexit was not something May hugely cared about though others in her party clearly did.”