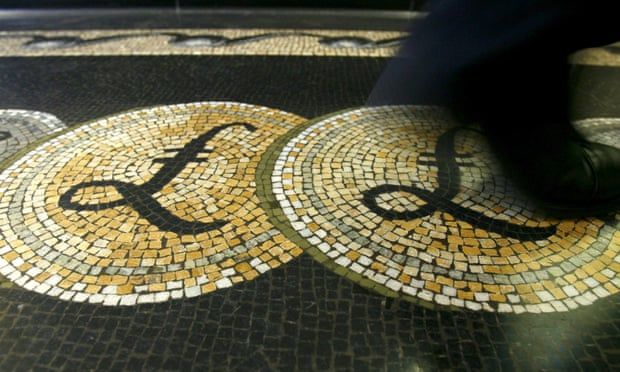 Blast from the past as currency speculators circle weakened pound

Analysis: Experts warn that sharp losses for sterling could drive up cost of imports and invite attacks on the currency

The judgment of the markets was swift and brutal. Currency traders took one look at what the Bank of England was predicting for the UK economy and launched a sustained attack on the pound.

It was noon last Thursday when Threadneedle Street announced it was expecting that a 40-year high of more than 10% for the annual inflation rate would coincide with a shrinking economy.

Bank governor Andrew Bailey told a press conference he wasn’t keen on the term stagflation – considering it imprecise. But the parallels with the 1970s were precise enough to trigger sharp losses for sterling. By the end of the day in London, the pound had lost two and a half cents against the US dollar.

By UK standards, what has happened in the past few weeks qualifies as a wobble rather than a full-blown crisis of the sort that forced sterling off the Gold Standard in 1931 or out of the European Exchange Rate Mechanism by speculators led by George Soros on Black Wednesday 30 years ago this year.

Nor was the sell-off as serious as that seen in 1976, the crisis that persuaded the then Labour government to ask for financial support from the International Monetary Fund. For the pound’s current weakness to become as legendary as 1931, 1976, 1992 or the postwar devaluations of 1949 and 1967, it would have to fall from today’s level of about $1.23 against the US dollar to parity, where £1 buys $1.

Even so, sterling’s weakness has implications. Stephen King, senior economic adviser at HSBC, thinks there is a risk of a feedback loop whereby the fall in the value of sterling adds to inflationary pressure by making imports dearer, and the evidence of higher inflation then leads to a renewed drop in the value of the pound.

Sterling, King says, is in the sights of the “vigilantes” – investors who look around the world for the weakest currencies and then attack them. 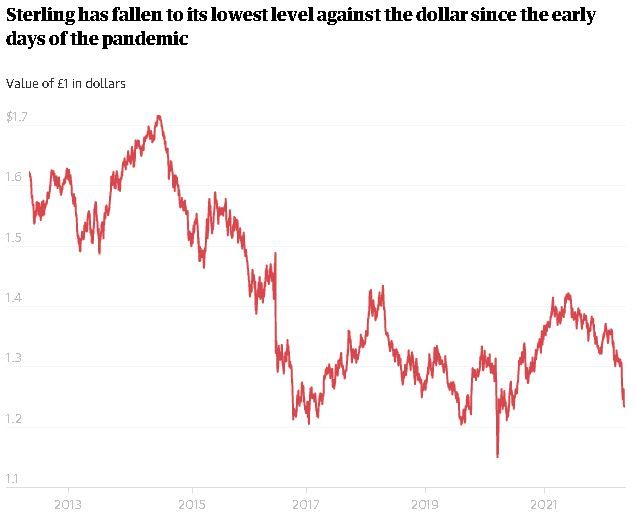 Part of the recent fall in the value of the pound has been due to the strength of the dollar, which always tends to attract support in times of trouble. Since the start of the year, the reasons to be nervous have mounted: the impact of the Omicron strain, China’s zero-tolerance approach to Covid-19 and the war in Ukraine.

Ominously, though, in recent weeks the pound has been weak not just against the US dollar but against the euro and other currencies such as the Australian dollar.

Nick Parsons, head of research at the impact investment firm ThomasLloyd, said: “The UK is set for the slowest growth in the G7. It is going to have the highest inflation in the G7. It has the greatest political uncertainty. That’s a pretty unpleasant combination.”

The recent sell-off in sterling came despite the Bank of England’s monetary policy committee raising interest rates at a fourth successive meeting. Traditionally, dearer borrowing costs make a currency more attractive to investors, but that was not true this time.

The reason was simple. Financial markets had been expecting interest rates to be raised to 2.5% by this time next year, but the threat of recession meant the Bank pushed back against that idea. With markets not entirely clear whether the MPC is more worried about growth or inflation, sterling is now lower than it was before rates were first raised late last year.

Gerard Lyons, chief economic strategist at Netwealth and one of Bailey’s rivals to be Bank governor, says: “At this rate a self-made sterling crisis could be next. Having wrongly eased aggressively when growth was recovering and inflation was rising last year, the Bank now continues to hike as it forecasts a sharp slowdown and likely recession ahead.”

A lower pound has its consolations. It will attract American tourists back to the UK and make UK exports more competitive on global markets. Conversely, imports and foreign holidays will be more expensive.

Parsons says any short-term boost to the pound is likely to prove temporary. “What would lead to a sterling rally? Aggressive rate hikes from the Bank of England? That’s not going to happen. Faster economic growth? You can rule that out. A big increase in exports? Dream on.”