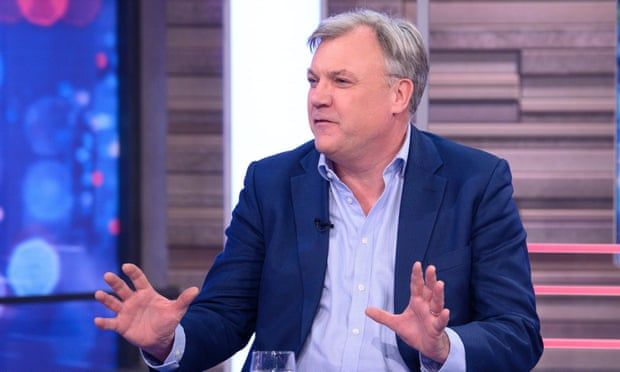 Blair and former PMs should not act as political ‘figureheads’, says Ed Balls

Ex-Labour minister tells Hay festival that the involvement of former leaders in the ‘next phase of politics’ may not be sensible
Ed Balls has said former prime ministers such as Tony Blair and David Cameron should not attempt to return as “figureheads for the next phase of politics”.

The former cabinet minister’s comments addressed Blair’s upcoming Future of Britain conference, which is seen as an attempt to reinvigorate centrist politics in the UK by taking inspiration from the success of La République En Marche, the recently created centre-left party that brought Emmanuel Macron to power in France.

Balls warned that the rise of polarised parties that were reluctant to work together made these “dangerous times for politics”, adding that the UK and France were “not in a politically healthy place”, while the US was “deeply divided as well”.

He told an audience at Hay festival: “I’m not sure whether it’s sensible to have people like Gordon Brown or Tony Blair, or David Cameron, Theresa May attempting to be figureheads for the next phase of politics … it may make things harder.”

Blair told the New Statesman in March that he wanted to advise the next Labour government. Earlier this month, his Tony Blair Institute thinktank produced a report recommending that Labour recapture the centre by rejecting “woke” politics and focusing on the economy.

Balls said he personally would not return to politics. “I think you have to be really careful in life not to go back and try to remake the past. I’m not sure whether going back would be wise for me or wise for anybody else.”

Although he acknowledged that the Tony Blair Institute, which is organising the conference, had “done lots of great policy work”, he questioned whether Macron was the right leader to emulate. “You have to be slightly careful about the Macron comparison. Was he a socialist or was he fundamentally an anti-politics outsider?”

He likened Macron’s decision to set up a party outside France’s political mainstream to a broader trend towards “people who were rebelling against the mainstream party, the established order, the outside trying to rip things up”, exemplified by the former US president Donald Trump, the former Labour leader Jeremy Corbyn and the impact of Brexit on the Conservative party.

“[Macron has] won again but where that will leave French politics at the end of his time, who knows,” he said.

Balls said his main takeaway from his political career was that while “debate and disagreement” could be constructive, ultimately the policies that “end up lasting are the things that become consensual, agreed across parties”, citing the NHS and the national minimum wage. “I don’t think we’ve had that for a long time.”

He added: “At the moment we’re in a phase of politics where, partly because parties are in such crisis internally, people get strength and traction from hating the other side and always disagreeing. If I’m honest, Macron was a little bit one of those as well.”

One pressing area where politicians needed to seek cross-party consensus was around a shared vision for the UK’s post-Brexit future, Balls said. He suggested Labour’s circumspection was an attempt to distance itself from the ill-fated campaign for a second referendum, but that the party could push for a “more progressive, internationalist” vision, and should challenge “ridiculous” policy ideas such as returning to imperial measurements.

He noted that the word “politician” had become a shorthand among the public for people who obfuscate and lie, and asked: “If politics becomes a discredited way to be, where does that leave democracy?”

He suggested politicians could change this by being “more open about talking about their lives, their ambitions, their mistakes”.

His final comments elicited titters from the audience: “Having the confidence to say we made a mistake, this is why it happened, we won’t make it again because we’re going to make the following changes, that would be a much better way to do politics … if you look in the last few months, we haven’t had much of that.”
#Donald Trump
Add Comment