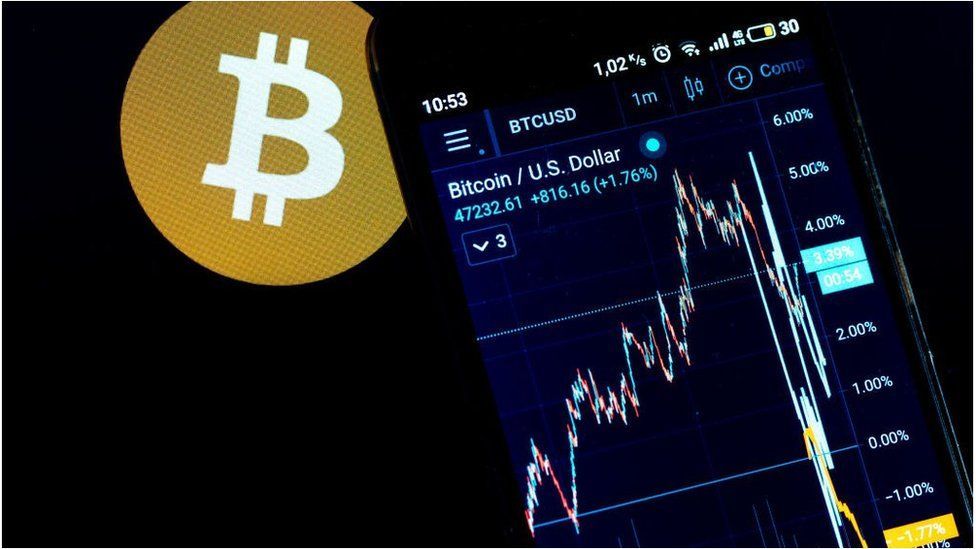 The so-called cryptocurrency, which was created by an unknown inventor, has risen about 72% this year.

Bitcoin and other cryptocurrencies are generated by computers. Part of its supposed value comes from the finite number that can be computed.

But regulators have warned that they are risky, since their value can change fast, both downwards and upwards.

Much of this year's gain for Bitcoin came after Elon Musk's Tesla bought $1.5bn of them and said it would accept them as payment for its cars.

Supporters say Bitcoin can act as a store of value, like a digital version of gold.

"If that narrative comes to fruition, then the growth potential is off the charts as $50,000 per bitcoin equates to a market cap of roughly $931bn, which is almost 9% of gold," said John Wu, president at blockchain company Ava Labs.

Unlike other commodities, however, Bitcoin cannot be used for anything else, merely bought and sold. This has made attempts to value it difficult.

Pricing is also susceptible to large swings because of the limited number which are traded. Many supporters are holding on to them in anticipation of higher valuations. Should they all sell at once, the price could tumble.

With no intrinsic value, unlike a physical asset such as land, and no ability to generate an income, unlike a company or bond, cryptocurrencies are extremely volatile and can crash as fast as they rise.

Critics point out that while Bitcoin may have a finite supply of units - 21 million - the number of cryptocurrencies is ever-growing and potentially limitless.

People have lost large amounts of money in steep drops in the value of cryptocurrencies and in hacks and scams associated with them.

Britain's financial watchdog, the Financial Conduct Authority (FCA), opened 52 investigations into suspected cryptocurrency frauds in the year to 30 June 2020, according to a Freedom of Information request from law firm RPC.

That was fewer than the 59 opened in the previous 12 months, sparking speculation that the regulator was short of resources to tackle cryptocurrency frauds.

"Given explosive growth in high-risk cryptocurrency and related frauds, we would expect the number of FCA investigations to jump up and not fall away," said Sam Tate, partner at RPC.

"The sheen of respectability now being given to cryptocurrencies is being taken advantage of by cyber-criminals and online fraudsters."

Because cryptocurrencies can pass international borders quickly and are not regulated in the same way as cash or regular investments, investigating thefts is hard.

Last month, the FCA issued a stark warning to investors in so-called cryptoassets.

The financial watchdog said investors should be "prepared to lose all their money" should their investment's value collapse.