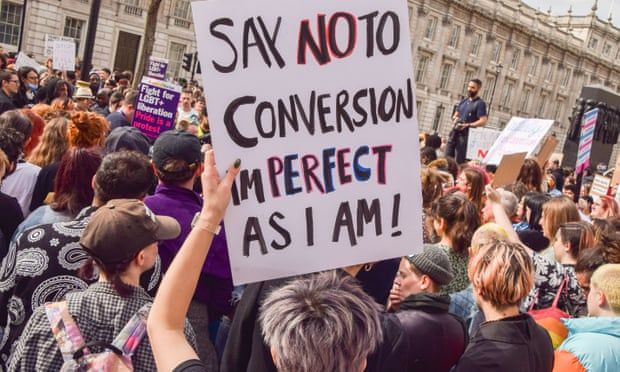 Plan means consenting adults in England and Wales still able to participate in process to alter sexuality
The government’s proposed ban on conversion practices intended to change people’s sexuality will in fact only fully cover under-18s, Downing Street has confirmed, saying it had to “strike the right balance” on outlawing the much-condemned practice.

In a move that appeared at odds with earlier talk of a ban, although officials noted the idea had appeared in consultation documents, No 10 said adults in England and Wales who consented to sexuality conversion for religious or personal reasons would be allowed to do so. This is expected to be permitted only if “this does not cause serious harm”, officials said, with full details to be set out in the promised conversion therapy bill.

The bill has already been watered down – originally it was planned also to outlaw similar practices intended to change someone’s approach to their gender identity. That was dropped, to the consternation of equalities groups and some MPs.

Asked whether this meant adults could undertake such practices with consent, Boris Johnsons’s official spokesperson said: “That’s the understanding. Obviously, we’ll set out the full details when we publish the bill.”

Asked why this was the case when the prime minister had described the process as “abhorrent”, the spokesperson said: “Obviously, this is a difficult area. We need to strike the right balance, but I think it’s important to wait for the full details of the bill to be set out.” He added: “It is obviously abhorrent to force this on anyone. But it is a complex area that needs careful management.”

Jayne Ozanne, a campaigner and former government adviser on LGBTQ+ issues, tweeted: “Whilst I’m naturally relieved to see that the government are still committed to banning ‘conversion therapy’, it is of great concern that they are creating so many loopholes and leaving so many people unprotected.

“The government’s own research shows that trans people are twice as likely to be offered ‘conversion therapy’ and it is an utter disgrace that they have purposefully omitted them from the ban.”

The Ban Conversion Therapy coalition said there were “two giant loopholes” to the law, in terms of consent, and the lack of provision for transgender issues.

In a subsequent statement, a Downing Street spokesperson said: “Our bill delivers on our commitment to ban harmful conversion therapy practices in this country, strengthen existing criminal law provisions and introduce a new offence that protects under-18s, as well as adults who do not consent and are coerced or forced into the practice.

“It will also include a ban on all physical conversion therapy, regardless of apparent consent.”

The briefing document for the Queen’s speech said the planned law would introduce a criminal offence “banning non-physical conversion therapies to complement existing legislation which protects people from acts which inflict physical harm”, with other safeguards such as potentially removing passports from those at risk of being taken overseas.

The law would ensure “parents, clinicians and teachers can continue to have conversations with people seeking support”, the guidance said, adding: “Robust, exploratory and challenging conversations which are part of regulated care do not fall within the scope of the ban.”
Add Comment