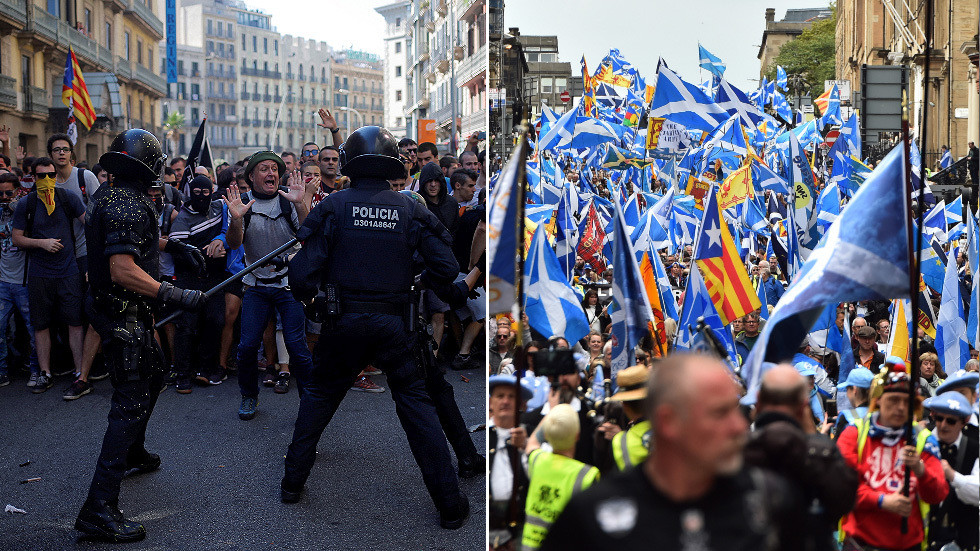 ‘Beyond belief!’: Labour leadership hopeful enrages Scots after using Catalonia as example of how to ‘beat divisive nationalism’

Labour leadership hopeful Lisa Nandy has incensed Scots after citing Catalonia, where Catalans have faced severe police brutality in their quest for independence, as an example of how to beat “narrow and divisive nationalism.”

In an interview with the BBC’s Andrew Neil on Wednesday night, Nandy was asked to expand on her proposals to set up an international commission that will look for historical examples of “how nationalism has been beaten by social justice.”

The leadership contender argued that Britain should be learning lessons from other countries around the world on how to defeat nationalism, using Spain’s handling of Catalan independence protests as a beacon for social justice advocates, like her.

Labour MP Lisa Nandy says places "like Catalonia" may provide examples of how to "beat" the Scottish independence movement. So, with police brutality and by locking up elected politicians?pic.twitter.com/XzZj6fWmOV

Perhaps unsurprisingly, Nandy’s views really haven’t gone down well among Scottish people on social media. The idea that it’s perfectly reasonable to use Catalonia, where politicians and demonstrators were locked up and police violence was dished out, as an example of how to deal with Scottish nationalism has prompted an avalanche of angry responses.

One person tweeted: “To use the example of the Madrid based brutality towards the Catalonia’s [sic], is beyond belief !!!” While another suggested that if fellow Labour leadership contender Rebecca Long-Bailey, a Corbynite, had used Venezuela as an “example to follow” the media would have crucified her, however, they treat Nandy’s views in suggesting the UK “replicate Spain’s extremism” as “uncontroversial.”

Scotland has the right to choose our government as do others in the UK.

Are you advocating violence against #Scotland and her people, to the same degree that Spain battered and beat people in #Catalonia? pic.twitter.com/8VpgkMG6nZ

Lisa Nandy: "We should look to places like Quebec and Catalonia, where divisive nationalism has been beaten with a social justice agenda." pic.twitter.com/V1ODdQWH0d

Catalan independence remains a hot topic in Spain more than two years after the referendum was stopped in its tracks by the Spanish government and a heavy-handed police operation. Both secessionists and unionists have repeatedly hit the streets in massive demonstrations throughout the region ever since.

In the aftermath, former Catalan President Carles Puigdemont fled the country and is now effectively exiled in Belgium.