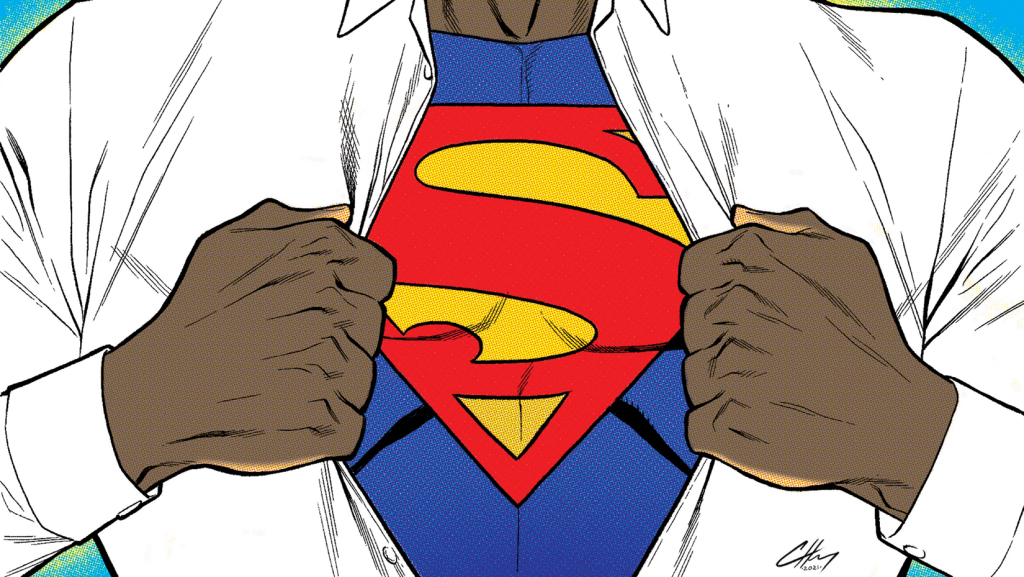 Behind Warner Bros.’ Search for a Black Superman

After enlisting Ta-Nehisi Coates to write the latest feature on the superhero, the studio is searching for its director and star as it kick-starts the next phase of its DC universe.
While promoting his Amazon Prime film Tom Clancy’s Without Remorse in late April, Michael B. Jordan put a Kryptonite pin in any rumors that he might suit up as Warner Bros.’ next Superman. “I’m flattered that people have me in that conversation,” Jordan told The Hollywood Reporter. “It’s definitely a compliment, but I’m just watching on this one.”

With that, a whole new guessing game has kicked off centered on who will play the Man of Steel. And arguably more pressing: Who will direct? Sources say J.J. Abrams, who is producing the film, is not among the many possibilities being considered. When Warners announced in February that celebrated author Ta-Nehisi Coates is writing the screenplay and Abrams is producing, it did not address the matter of helming. But insiders say Warners and DC are committed to hiring a Black director to tackle what will be the first cinematic incarnation of Superman featuring a Black actor, with one source adding that putting Abrams at the helm would be “tone-deaf.”

In a fitting twist, the director search is pitting DC against none other than Marvel. As Warners looks to fill its Superman vacancy, Marvel is on the hunt for a Blade helmer and is combing through the same list. But the question will come down to what kind of filmmaker Bad Robot and Warners want: an up-and-comer who can be backed by Abrams, who knows his way around tentpoles and franchises? Or an established filmmaker like a Barry Jenkins or a Ryan Coogler?

The former list can include Creed II’s Steven Caple Jr., J.D. Dillard, Regina King — who got raves for her drama One Night in Miami — and Shaka King, who is popular at Warners thanks to best picture Oscar nominee Judas and the Black Messiah. Some potential directors have met with both studios for both films, even as one agent said the process was “phenomenally early.” Meanwhile, Coogler may be a nonstarter for either assignment given that he will be occupied with Black Panther: Wakanda Forever, which releases July 8, 2022.

Coates isn’t expected to deliver his Superman script until mid-December. Likewise, Marvel isn’t rushing with Blade, whose start date was pushed from this September to July 2022, so that the studio can spend time working on the Stacy Osei-Kuffour-penned script.

While the next Superman will likely land with a name director, the star could be a relative unknown, as was the case when Brandon Routh suited up for Bryan Singer’s 2006 Superman Returns and Henry Cavill donned the cape for Zack Snyder’s 2013 Man of Steel. Neither Superman Returns nor Man of Steel lived up to outsized expectations, with the former earning $391 million worldwide and the latter taking in $668 million. By contrast, James Wan’s Aquaman nabbed $1.15 billion in 2018 and Todd Phillips’ Joker scored $1.07 billion (and multiple Oscars).

But establishing a new tone with the launch of the next Superman franchise is key to Warner Bros.’ DC film future. As such, little will remain of the so-called Snyderverse vision, which enjoyed its last hurrah with Snyder’s four-hour Justice League bowing on HBO Max in March. Among his hand-picked stars that remain are Gal Gadot (Wonder Woman), Jason Momoa (Aquaman) and Ezra Miller (The Flash).

DC sees its upcoming Flash movie, which began production in April in London, as its way forward in this post-Snyder world. With the inclusion of such characters as Supergirl (Sasha Calle) and Michael Keaton’s Batman, one thing Flash does is set up DC with a multiverse that allows for many of these incarnations and story universes to co-exist and have superheroes interact. So far, every movie and TV show, with the exception of Matt Reeves’ The Batman, starring Robert Pattinson and set for release in March, HBO Max’s spinoff Gotham PD, and Joker and its planned sequel, will take place in the same universe.

The Superman film appears to be moving onto its own track and won’t be part of the universe, as of now. Sources tell THR that Coates is crafting a Kal-El in the vein of the original Superman comics and will have the protagonist hail from Krypton and come to Earth. While the story is currently being crafted and many details could change, one option under consideration is for the film to be a 20th century period piece.

Diversity and representation remain key drivers of the DC universe moving forward. Warners is developing a Latino Blue Beetle movie with Angel Manuel Soto attached to direct, and HBO Max is casting for a gay Green Lantern character for an upcoming series. And The CW’s Arrowverse is about to get its second Black female superhero series with Ava DuVernay’s Naomi (Batwoman also features a Black lead, Javicia Leslie) just as Black Lightning is about to wrap its final season.

As for Abrams, who inked a $500 million deal with WarnerMedia in September 2019, he will still wield plenty of influence in the DC universe. With Snyder gone, the Star Wars: Episode VII — The Force Awakens director now will have perhaps the largest footprint as he oversees the Justice League Dark Universe for film and TV. Among the rumored projects is a Constantine reboot for HBO MaxX. At a minimum, Abrams should be raising hell at DC with the Hellblazer protagonist.
Add Comment