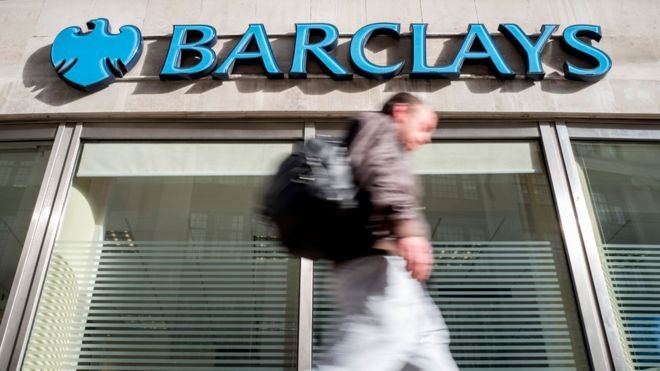 Barclays to send staff back to working from home

Barclays will tell "hundreds" of UK staff who had gone back to the office to return to working from home.

The bank told the BBC it was making the move following the latest guidance from the government that people should work at home when they can.

About 1,000 Barclays employees worldwide returned to the office over the summer.

French bank Societe Generale and the insurance market Lloyd's of London also told their UK staff to work from home.

Barclays said it would not be releasing a country-specific number on those returning to work from home.

"It is important to get people back together in physical concentrations," he told Bloomberg TV in July.

However, not all banks take the same view. NatWest has said staff can continue to work from home until next year.

On Tuesday, Societe Generale said it was also "adapting its position in line with UK government guidance", without stating the number of workers in its London offices would now work from home.

Lloyd's of London said it had told its 800 directly employed staff to work from home but that this did not apply to the independent brokers who use its Lime Street headquarters.

"Lloyd's underwriting room is certified as a Covid-secure environment and will remain open for market participants," the company said.

Business groups have reacted with dismay to the prime minister's call for people to work at home where they can.

The CBI said that it was a "crushing" blow that would have a "devastating impact".

It marks a change in policy following a government advertising campaign to get people back to work where safe.

Campaign group London First said it would discourage people from returning to workplaces and risk "derailing an already fragile recovery".

CBI director-general Carolyn Fairbairn told the BBC: "We know we need to avoid a second national lockdown at all if we possibly can, but I have to say these are crushing blows.

"And I think that the answer for business, and what I'm hearing in my conversations this morning, is make it a short, sharp shock if it has to happen." 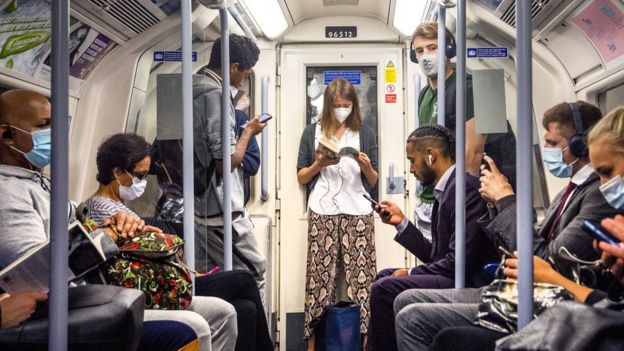 Public transport is still a worry for many people

Appearing on the Emma Barnett Show on Radio 5 live, she said she was speaking to the programme from her office and that "about 15%" of her people were in.

"They're excited about coming back, we need to plan to bring more people back. It's good for morale, it's good for learning, it's good for creativity and so many businesses are feeling that, so this is a backward move that won't be welcomed, and let's make it as short as it needs to be."

"The new restrictions must be regularly reviewed to minimise the damage to the economy while safeguarding the health of the nation in the round - not just physical health, but mental health and our economic health, said London First chief executive Jasmine Whitbread.

She also called for the government to extend business rates relief and to introduce a "targeted" version of the furlough scheme, which is due to end on 31 October.

As well as the change in stance on working from home, Boris Johnson also confirmed that pubs and restaurants in England will have to close at 22:00 from Thursday to stop the spread of the coronavirus. He warned that the new measures could last up to six months.

Ms Whitbread said: "A targeted version of the furlough scheme would help those hardest hit in leisure, retail and hospitality."

Roger Barker, director of policy at the Institute of Directors, said the spread of coronavirus was not wholly predictable, but the "back and forth" on office working would cause "frustration".

He added: "Business leaders are eager for the government to focus on the foundations, issues like childcare, public transport, and getting the testing system firing on all cylinders."