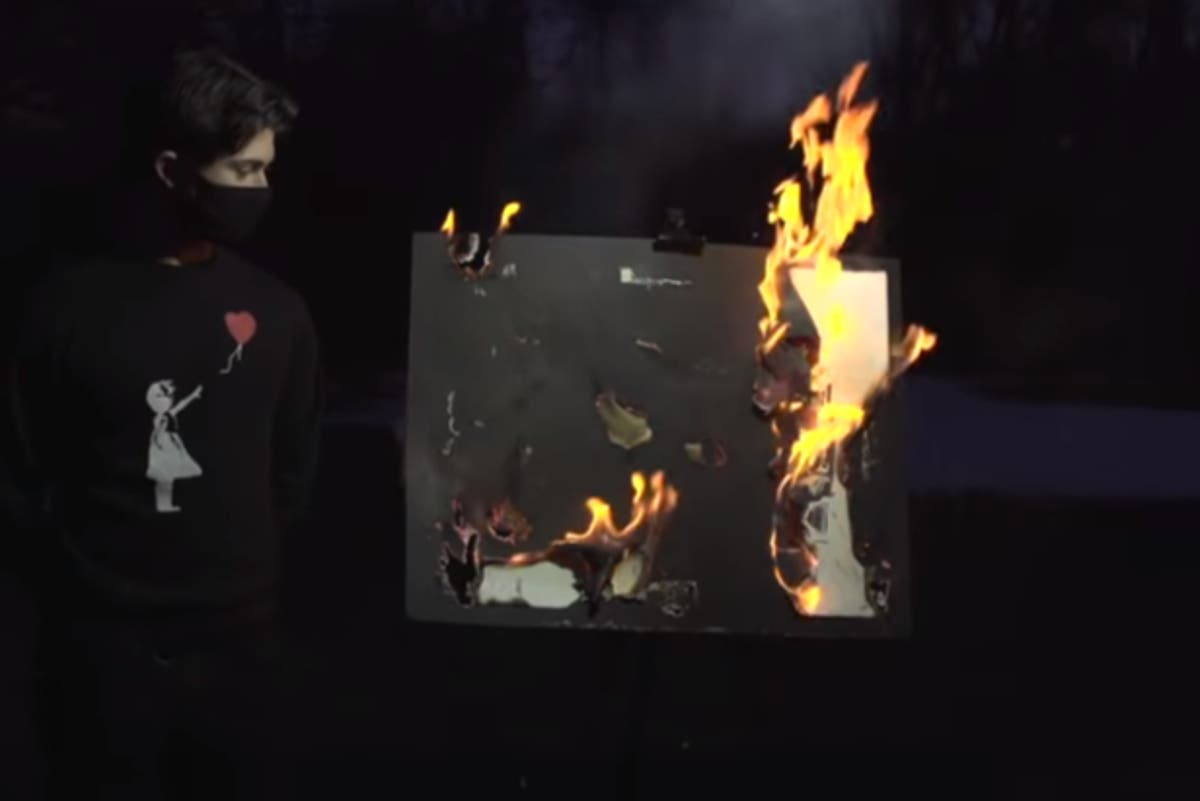 How do you make a $95,000 screen-print by street artist Banksy four times more valuable? The answer, it would seem, is by incinerating it.

Three years after the artist rigged up a painting to self-shred itself as it was being auctioned, a group of cryptocurrency enthusiasts have gone a step further.

It was scanned and transformed into a unique digital asset known as a non-fungible token (NFT) which was uploaded and stored in the digital ether of blockchain. The physical print was then slowly torched on camera in a Brooklyn park.

The moment of destruction was live-streamed on the twitter account of its owner, a collective using the name BurntBanksy.

The NFT - effectively the artwork’s digital remains - was then offered for sale on the OpenSea auction platform and, after a bidding war involving more than 70 different parties, reached a closing price of 228.69 units of cryptocurrency Etherium - today worth around $400,000.

While anyone can view or display the image, only the new owner - listed on the site as ‘Galaxy’ - can trade the digital original: their ownership is hardwired into its mathematical code, certifying ownership until it is again sold on.

The bizarre, destructive method of buying and selling art has been gaining ground among the crypto communities in recent months.

What started with bad cartoons and flying poptart kittens encoded by enthusiastic amateurs into the vast strings of binary code that makes up blockchain is now attracting serious players.

Other moments in time captured in digital kryptonite as NFTs and now being traded include Jack Dorsey’s first tweet (‘just setting up my twttr”), video clips of major sporting moments, Wiliam Shatner trading cards, and tracks on the new Kings Of Leon release.

The Banksy purchase is thought to be its first venture into the verified works of a mainstream artist.

BurntBanksy explained: “We specifically chose a Banksy piece since he has previously shredded one of his own artworks at an auction. We view this burning event as an expression of art itself.

“We are generating a new form of artwork via the creation of this unique NFT that is a direct representation of the physical.”

Their argument is effectively, that the digital token is of greater value than the original work because it is safe from loss, theft, damage or vandalism - by people such as themselves.

Mirza Uddin, a spokesman for Injective Protocol, said the group planned to give the proceeds from the NFT sale to a Covid-19 based charity: “We’re already planning our next event in collaboration with a prominent artist.

“Our aim is to bridge the world of traditional art with the world of NFTs. So, we’ll definitely be doing more to uphold this ethos,” he told CoinDesk.

Ali Raza, of inside bitcoins, said: “Sadly, the new trend of burning paintings to ash after they were tokenized as an NFT is becoming alarmingly more common.

“Granted, it’s a good way to boost the value of the NFT, making it the true “one and only” art piece but it’s a sad sight to see for many to witness the destruction of art just to validate another piece of art.“

Adding an extra layer of irony to an already tangled tale, the 2006 Banksy original was a critique on madness in the art market.

An auctioneer points at framed paintings amid a crowded auction room: next to him stands a framed image with the words: “I can’t believe you morons actually buy this s**t.” 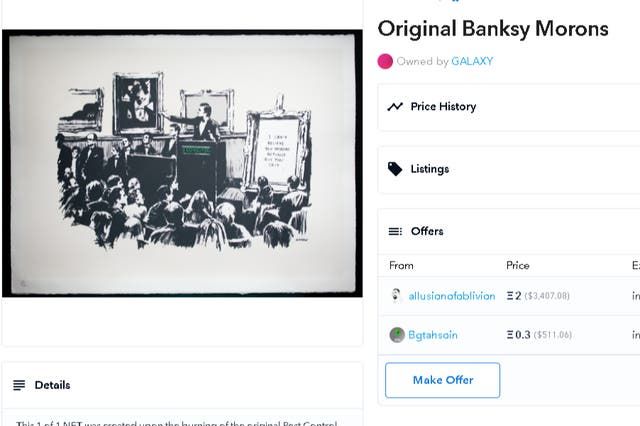