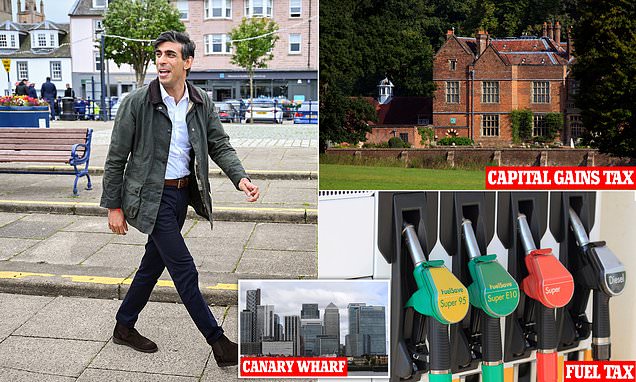 The Chancellor is said to be considering a huge fiscal raid in this autumn's Budget to plug the gaping hole in public finances after record spending on coronavirus.

Senior Tories last night urged Rishi Sunak to abandon plans for a £30billion tax grab over fears it could throttle an economic recovery.

The Chancellor is said to be considering a huge fiscal raid in this autumn's Budget to plug the gaping hole in public finances after record spending on coronavirus.

Many of the proposals would hammer the middle classes and better-off.

Fuel duty, capital gains tax, corporation tax, the pension triple lock and pension tax relief are all said to be in the firing line. 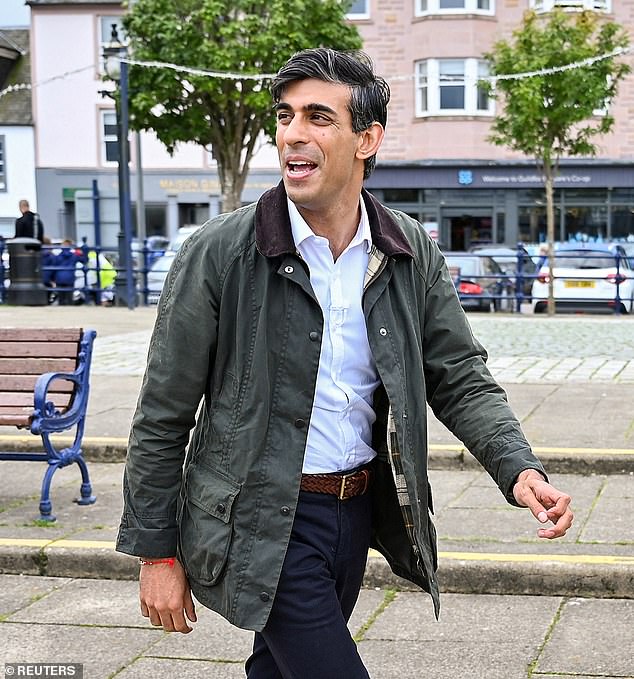 The proposals are reported to have been drawn up by Treasury officials as 'options' for ministers in the Budget, which is pencilled in for November.

No decisions have yet been taken by ministers about how to deal with a deficit expected to top £300billion this year.

But one Cabinet minister said the Chancellor would face a revolt if he pressed ahead with the tax grab.

'Tax rises of this sort would be the worst possible economic policy to adopt right now,' the minister said.

'It would guarantee a much deeper recession. Large parts of the economy are still fragile – we need to nurture it, not throttle it.' 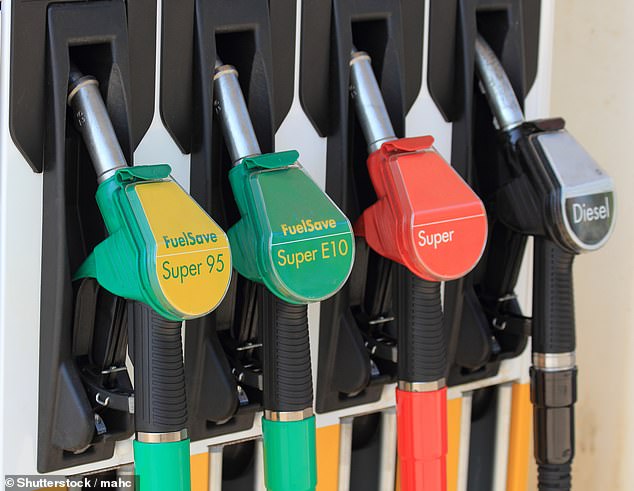 Boris Johnson has told allies he wants taxes as low as possible.

Government sources last night played down reports of a rift with Mr Sunak over the issue.

But Mr Johnson is said to be pushing for a bigger effort to control Whitehall spending.

Adam Marshall, director-general of the British Chambers of Commerce, said the Chancellor should focus now on encouraging 'the embers of the recovery' and worry about repairing the public finances later.

He told Times Radio: 'We do not want to make a choice between a strong recovery, with lots of investment and risk-taking by business people, or a short term repair of the public finances. 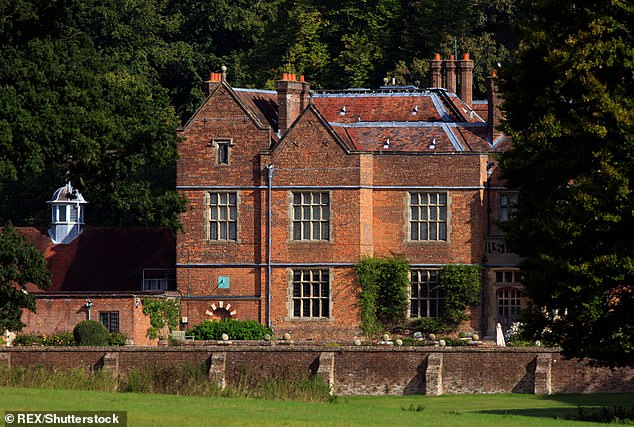 Plans floated include aligning capital gains tax with income tax, which would see the charge on profits from the sale of second homes and other assets rise from 28 per cent to 40 per cent

'We've got to give the recovery space to build and grow.

'If the Treasury snaps back to orthodoxy immediately it will be a really damaging mistake.'

Plans floated yesterday include aligning capital gains tax with income tax, which would see the charge on profits from the sale of second homes and other assets rise from 28 per cent to 40 per cent for the better-off.

Treasury officials are also targeting corporation tax, with one report yesterday claiming it could be raised from 19 per cent to 24 per cent.

The move would raise £12billion a year but tear up Tory orthodoxy that the UK should aim to have one of the most competitive rates in the world.

Pension tax relief for higher earners is another possible target, with the Treasury reviving concerns about whether the 40 per cent rate offered to the better-off is justified.

Cutting pension tax relief to 20 per cent would raise £11bn, the Institute for Fiscal Studies says.

A 2 per cent online sales tax would bring in £2bn.

Treasury officials are also keen to end the decade-long freeze on fuel duty. A 1 per cent increase in fuel duty would make £295m.

And Mr Sunak is known to be looking at suspending the pension triple lock for two years, despite opposition from the Prime Minister.

Asked specifically whether corporation tax could be increased, he said: 'There are always a whole range of measures and as soon as one starts to say, well I rule this one out you'll cherry pick as to which ones one hasn't done. 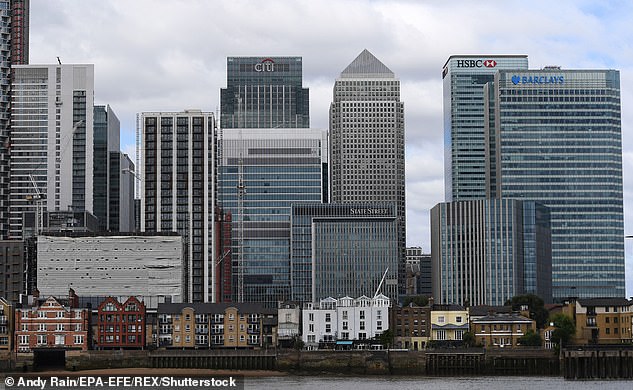 Treasury officials are also targeting corporation tax, with one report yesterday claiming it could be raised from 19 per cent to 24 per cent

Tory MPs called publicly for Mr Sunak to step back from imposing tax rises this autumn.

'We need policies to promote more jobs and activity to get the deficit down.'

He added: 'We need to cut taxes to help the economy rather than clobber it with deeply unwise deficit hawkishness.'

Fellow Tory Robert Halfon appealed to the Chancellor not to clobber motorists by increasing fuel duty.

Mr Halfon, whose campaigning has helped see off fuel price increases, said raising the tax would 'impact on the cost of living for families, hit business costs and jobs, and increase expense for public services like the NHS'. 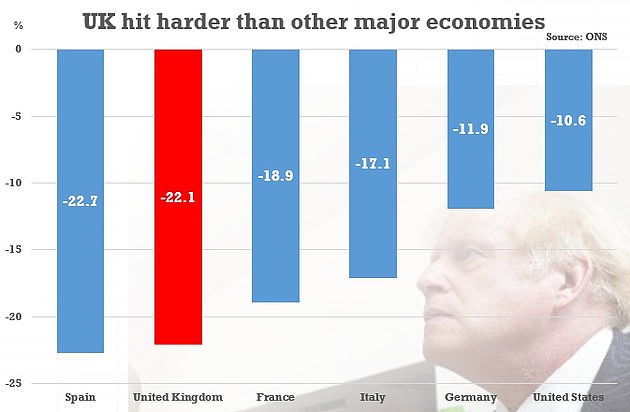 Chris Sanger, head of UK tax policy at accountants EY, told The Telegraph: 'The UK has been on a long journey to reduce its corporation rate, which is seen by many businesses as an indicator of how competitive a country wants to be. The UK has prided itself on having the lowest corporate tax rate of any G20 country.

'The Saudis have a rate of 20pc so it will stop them claiming that and be seen as a sea change in tax policy.'

Rupert Harrison, former chief of staff to George Osborne, warned that raising the rate of capital gains tax could backfire.

He said the Coalition government had settled on 28 per cent because Treasury modelling suggested it was the 'revenue maximising rate', with total receipts falling if it was pushed higher.

Mr Sunak has already launched a review of capital gains tax, although the Treasury insists that this is aimed at simplifying the system rather than raising revenue.