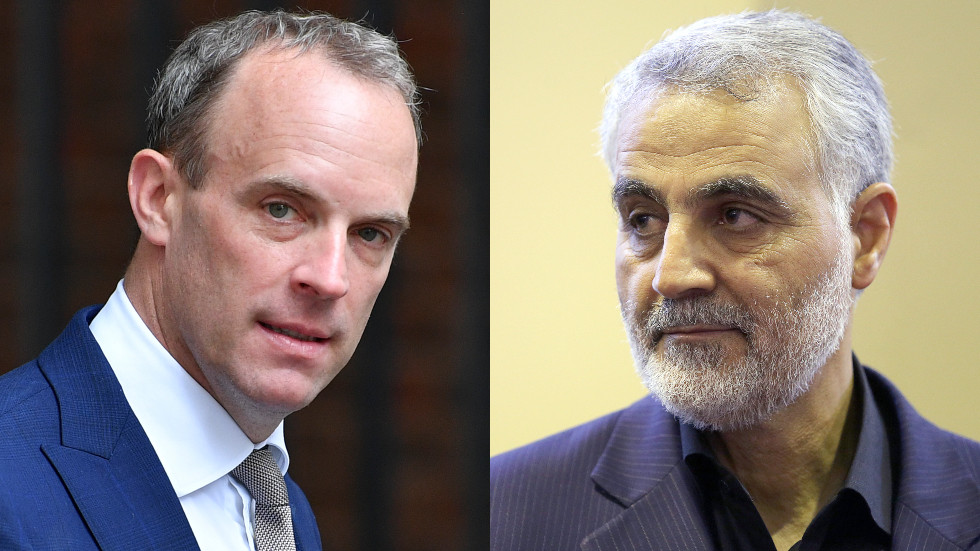 ‘We urge all parties to de-escalate’: British foreign sec Raab calls for calm after US assassination of Iranian commander

British Foreign Secretary Dominic Raab has urged “all parties to de-escalate” after Iran’s Quds Force commander Qassem Soleimani was killed in a US military airstrike near Baghdad International airport on Thursday night.

In a statement on Friday morning, Raab insisted that the UK government “recognised the aggressive threat posed by the Iranian Quds force led by Qassem Soleimani.” However, he called on “all parties to de-escalate,” and claimed that “further conflict is in none of our interests.”

US Secretary of State Mike Pompeo revealed via Twitter that he and Raab had discussed the incident and suggested that Britain was in agreement on the "threats posed by the Iranian Quds Force."

Discussed with @DominicRaab the recent decision to take defensive action to eliminate Qassem Soleimani. Thankful that our allies recognize the continuing aggressive threats posed by the Iranian Quds Force. The U.S. remains committed to de-escalation.

The targeted assassination authorized by US President Donald Trump has sparked huge anger in Iran and Iraq.

Officials in Tehran have pledged to avenge the death of the high-profile commander of the Islamic Revolutionary Guards Corps (IRGC). Iranian President Hassan Rouhani branded the killing a “cowardly act” that confirms “the weakness of the United States in the region.”

Iraq’s caretaker prime minister Adil Abdul Mahdi said the US assassination operation was a “flagrant violation of Iraqi sovereignty” and an insult to the dignity of his country.

The assassination comes days after Iran-backed Iraqi militias staged a riot at the US embassy in Baghdad, a response to US retaliatory airstrikes on militia forces. The Pentagon insisted that the killing of Soleimani represented “decisive defensive action to protect US personnel abroad.”

In April 2019 the US designated the IRGC as a terrorist organization. Trump declared that Iran was “a state sponsor of terrorism,” and that the IRGC “actively participates in, finances, and promotes terrorism as a tool of statecraft.”