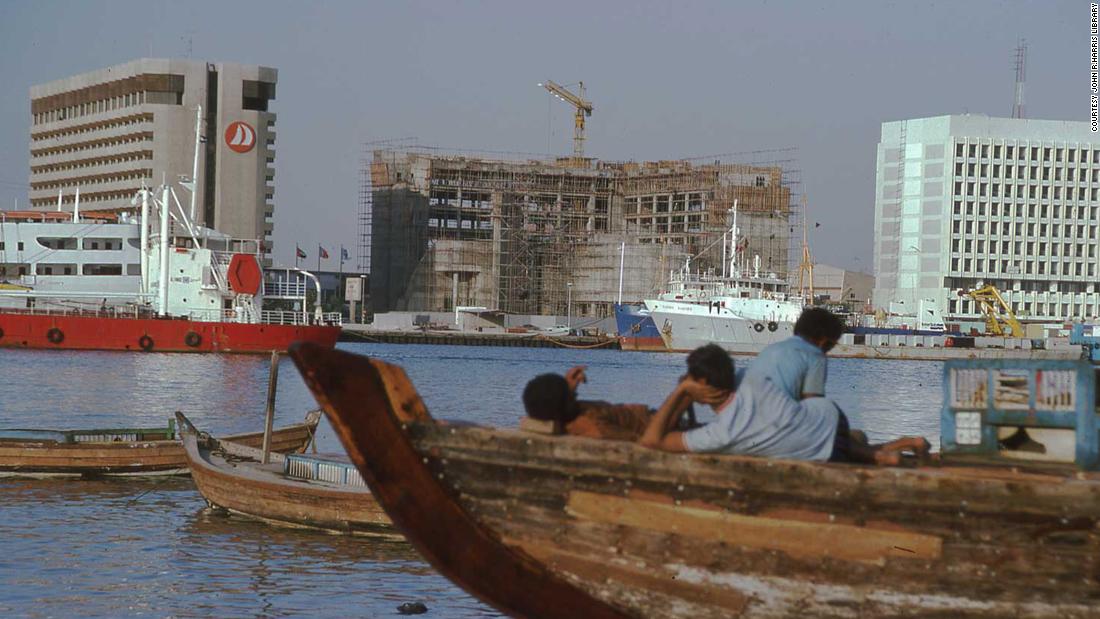 These buildings are designed to give Dubai a reputation for architectural splendor, part of the city's pursuit of international recognition -- currently exemplified by the World Expo it's hosting for the next five months.

However, Dubai's desire for attention is not new. The desert city set out on its quest to become a place of architectural eye candy in the mid 1970s, when construction began on Dubai World Trade Centre, according to architect Todd Reisz, author of "Showpiece City: How architecture made Dubai."

He is the curator of exhibition "Off Centre / On Stage," which will run until mid-February next year at Jameel Art Centre in Dubai. It showcases and recalls an older Dubai at the time when it was beginning its transformation into the city of today.

It includes photographs taken between 1976 and 1979 by British architects Stephen Finch and Mark Harris who were engaged in imagining, designing and delivering the city's future, being both affiliated with John R. Harris & Partners, the British architectural firm behind the 149-meter-tall (489-foot) World Trade Centre.

Reisz said the words "On Stage" in the exhibition's name refer to "the fact that the city has actually been on stage for decades. It's used expos and exhibitions as a way to promote itself, and also to entice people to come and live there, to invest there. That's been the way the city has really been able to grow."

He added that as early as the 1960s, the leadership of Dubai was promoting it in international newspapers, trying to convince people it was city of the future.

Moving beyond the Creek

When visitors walk into the exhibition, they are greeted with an expansive view of Dubai Creek. Less than 200 years ago, Dubai was a small fishing village and the Creek was just an estuary. By the 1960s, it was an engineered canal, one of the city's first large-scale infrastructure projects, made to develop Dubai's reputation as a major trading hub.

"'Off centre' refers to the fact that the city for decades had been centered around Dubai Creek," said Reisz. "Dubai Creek was this defining geographical entity that allowed people to orient themselves. In the 1970s, we start to see that there's a gradual but unstoppable movement away from the Creek, especially toward the Abu Dhabi border.

'Looking toward what's going to come'

Many of the photographs portray the people who were involved directly or indirectly in delivering Dubai's future -- from service industry workers to taxi drivers, said Reisz. Although, this future is ever-changing.

"There's always a kind of sense Dubai is like one big board that says, 'please excuse the mess, we're working on creating something bigger,'" he added.

"Many times, people are looking more toward what's going to come and not looking back toward how we've gotten to where we are today. That, for me, was really important to show. Dubai is not a city that's risen from the sands, it's a city that's risen because of people. People who have made decisions in their lives to contribute to the city in some way."

It was while writing "Showpiece City" that Reisz discovered the photographs, which are Kodachrome slides, a medium that captures rich colors. "Even in the middle of the day, the colors are just so saturated and attractive that you almost begin to hear the pictures," said Reisz.

While there are a few aerial shots, the majority of the exhibition photographs were taken from the ground, helping visitors see what it would have been like to walk through the city in the 1970s.

Reisz adds: "Whenever I hear someone say, 'there used to be nothing here,' ... I want to argue with them. I think it's really important to understand that there was always something there.

"Whether it was the sparsest kind of farming going on, whether it was trade routes that went across parts of the coast, whether it was settlements that had been there and had been left at some point, it's impossible to say that there was nothing there. There's always been something." 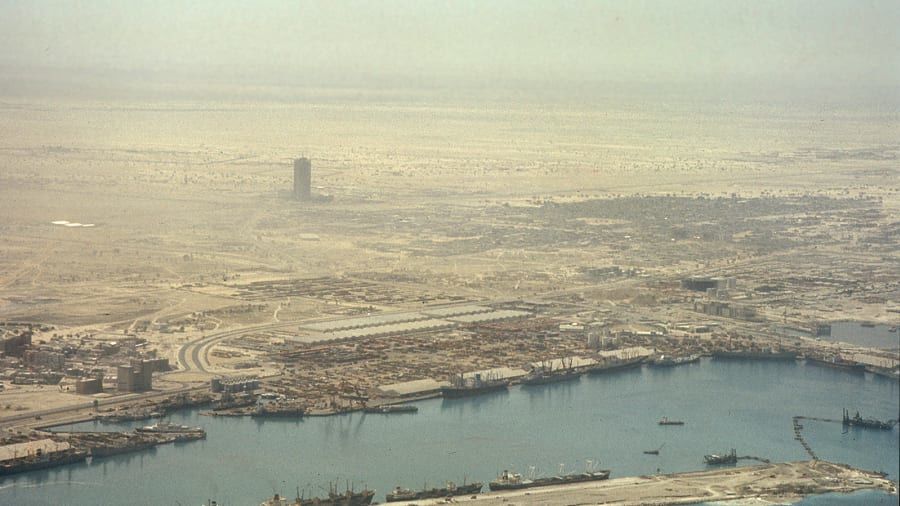 "Off Centre / On Stage" is an exhibition of photographs of the city taken between 1976 and 1979 by British architects Stephen Finch and Mark Harris. The exhibition shows Dubai at the point at which it was beginning to be reimagined as a city of awe-inspiring architecture. This bird's-eye view above Port Rashid, from 1977, looks out toward the World Trade Centre, Dubai's first skyscraper, which was under construction. 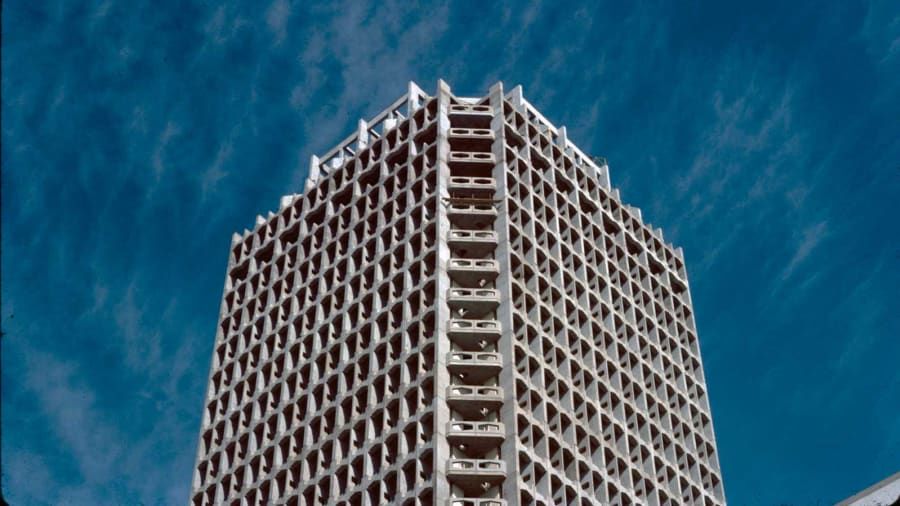 This "monumental" photograph of the Dubai World Trade Centre in 1977 -- which has been made into a postcard -- was taken by Stephen Finch, the lead architect for the tower. "It's one that allows us to see how people looked up at the building for the first time," explained the exhibition curator, architect Todd Reisz. 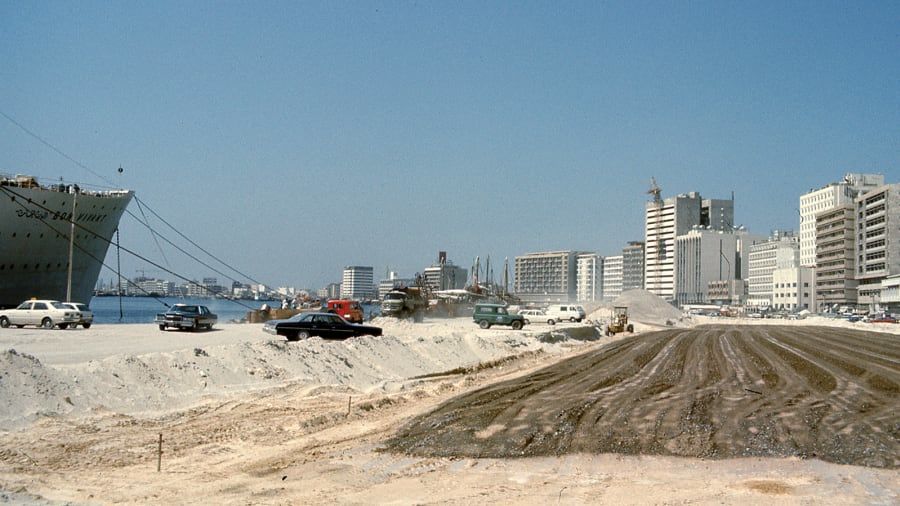 This photograph of Baniyas Road was taken in 1977. The road is being extended on land that has been recently reclaimed from the waters of Dubai Creek. As you look further inland, you see how the area has been developed with recently built office towers. The tallest building in the photograph was the tallest building in Dubai until the construction of the World Trade Centre, according Reisz. 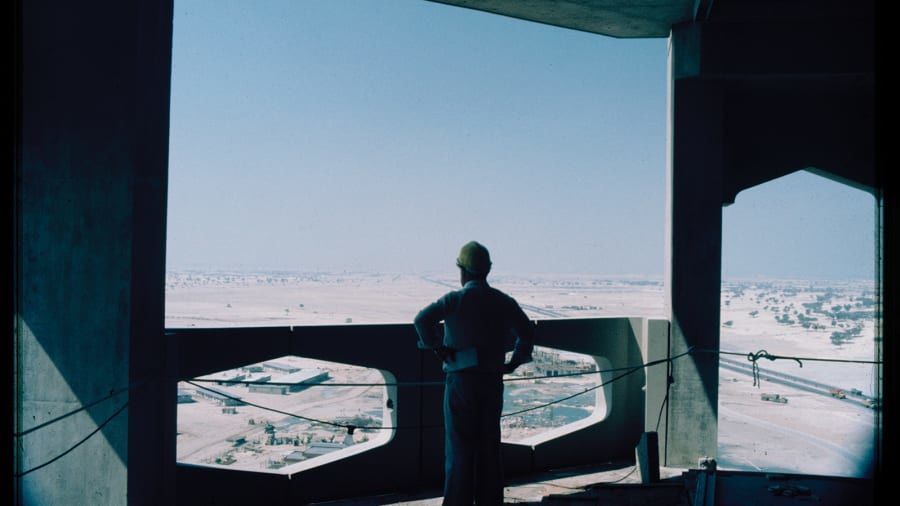 This image from 1977 shows the view toward the city from the World Trade Centre. Construction of the 489-foot (149-meter) tower was completed in 1979. 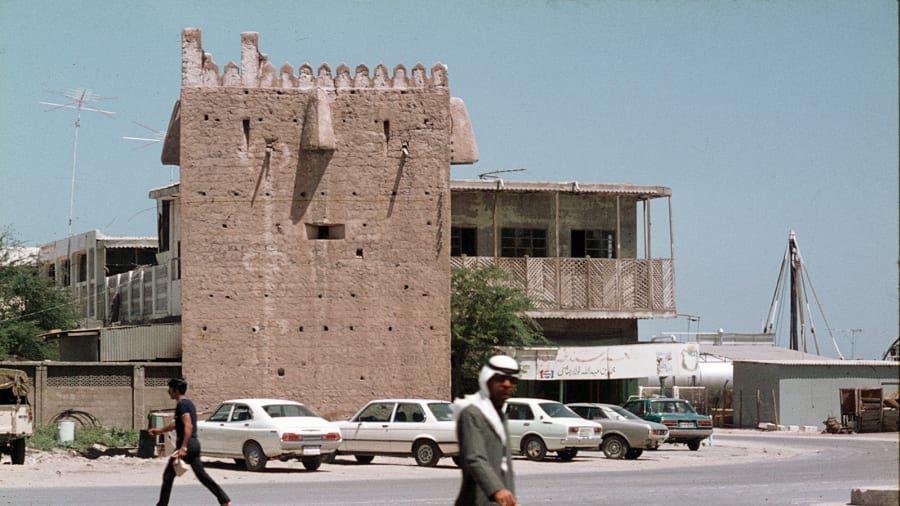 Reisz say this photograph, from 1977, shows a pre-concrete structure in Bur Dubai, which would have once been a watchtower. He describes the image as "a moment of preservation." The watch tower stood along what was planned to be a busy road connecting the port to the growing city beyond the creek. The watchtower still stands today. 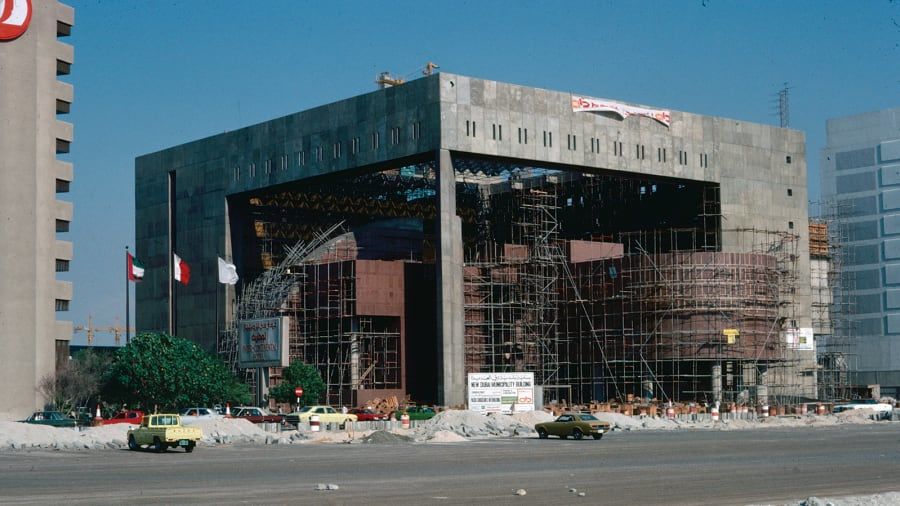 This photo from 1977 shows the construction of the Dubai Municipality building. The road along Deira Creek had not yet been layered with asphalt. "This is a rather iconic building in the city, still even today," said Reisz. "I think it's a pretty fascinating building because it's one of the few that there was an effort to make a space, a kind of liminal space, between outside and inside, being a kind ofshaded plaza. You can see that there's a kind of a shaded interior courtyard." 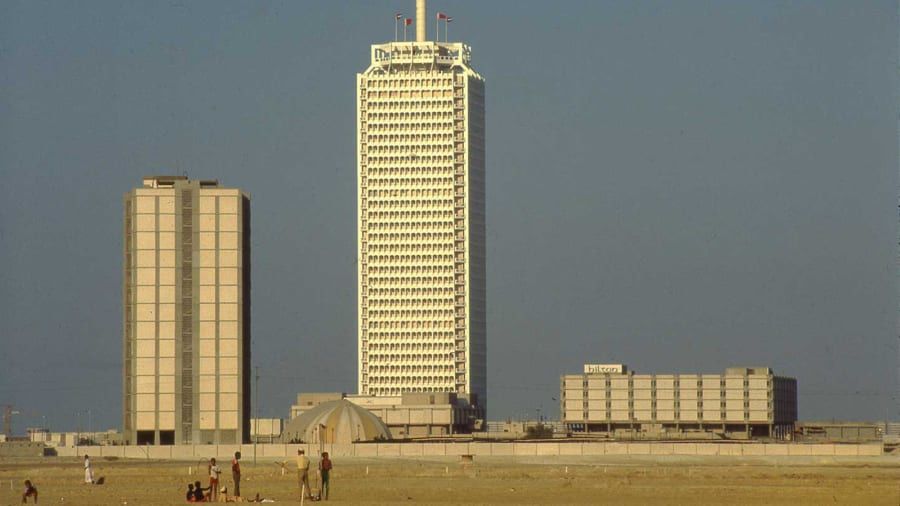 This photograph was taken in 1980 when the World Trade Centre had been painted white. It also captures people playing cricket nearby. "They're able to play here temporarily only -- because the expansion of World Trade Centre was already planned," said Reisz. "The contrast is also really striking in terms of these large buildings, and people trying to make their life around them." 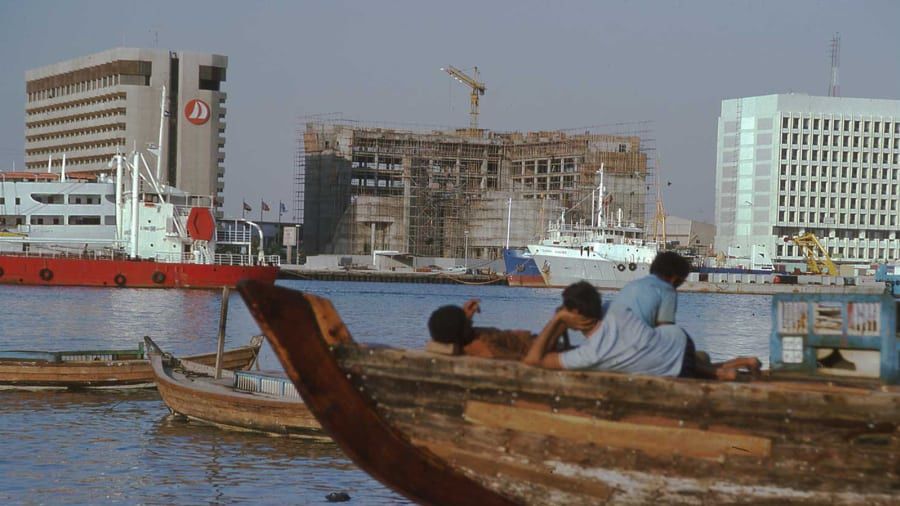 The men in this 1977 image of Dubai Creek are looking towards the Municipality building, which is under construction. "They're probably in Dubai for a day, a week, maybe they have no idea how long they're staying," said Reisz. "But their life is on that boat, which captures the kind of mobility of people, the transiency of life in Dubai. You imagine maybe this is their second or third time in Dubai and they've seen Dubai Municipality building get larger each time they come to shore." 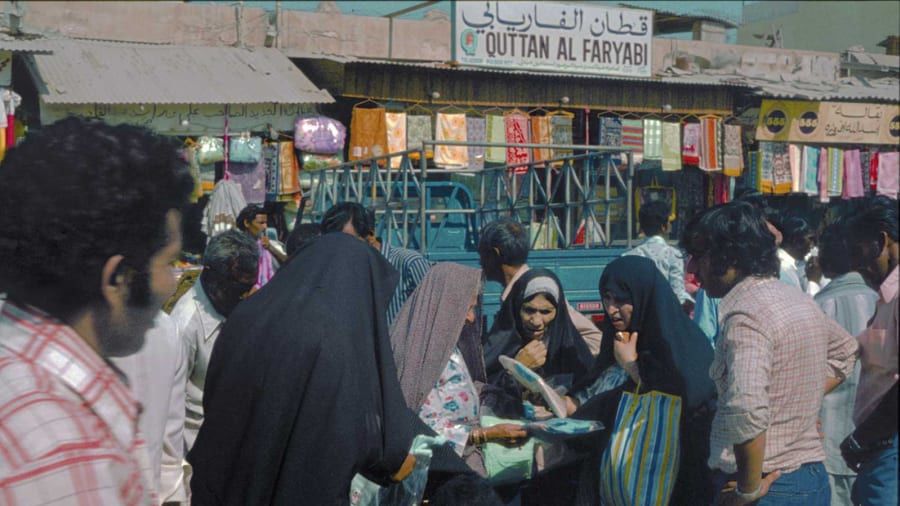 This is an image of "hustle," said Reisz, of this photograph of Deira Souk in 1977. "I really love that this image is of four women who are negotiating in the souk, and there are men around them waiting for their decision, trying to influence their decision-making, but also ready to hear, let's say, which one and how many they're willing to buy." 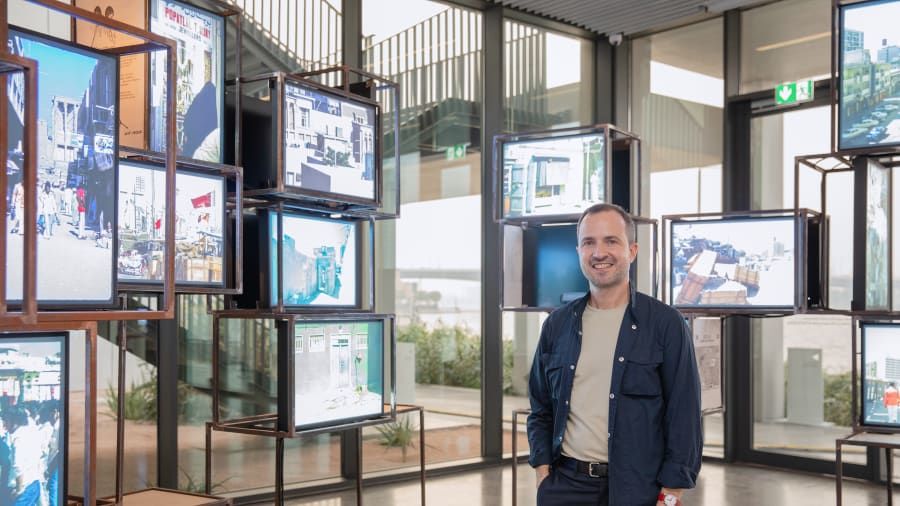 The photographs at the exhibition are Kodachrome slides, which are illuminated in 58 light boxes that are stacked in steel boxes to create "our own kind of city," said Reisz, who discovered the images while researching his book, "Showpiece City: How architecture made Dubai." 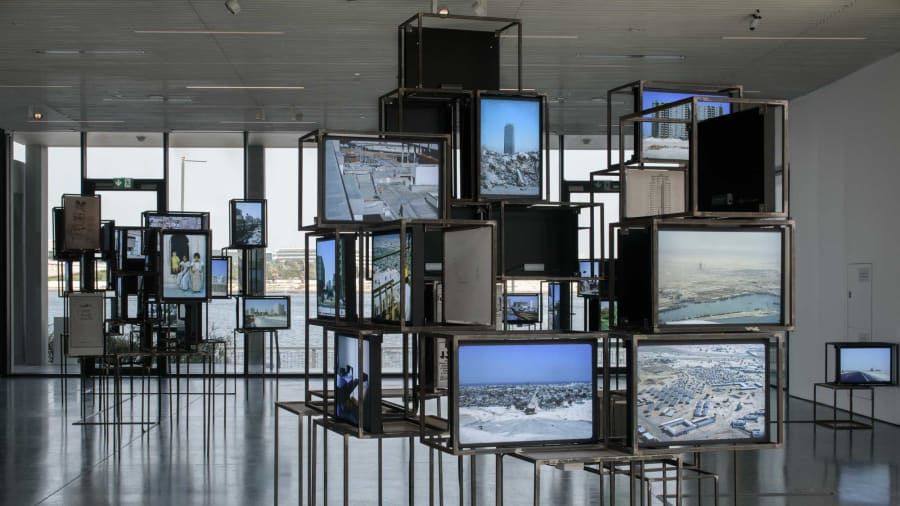 The exhibition will run at Jameel Art Centre until mid-February 2022.