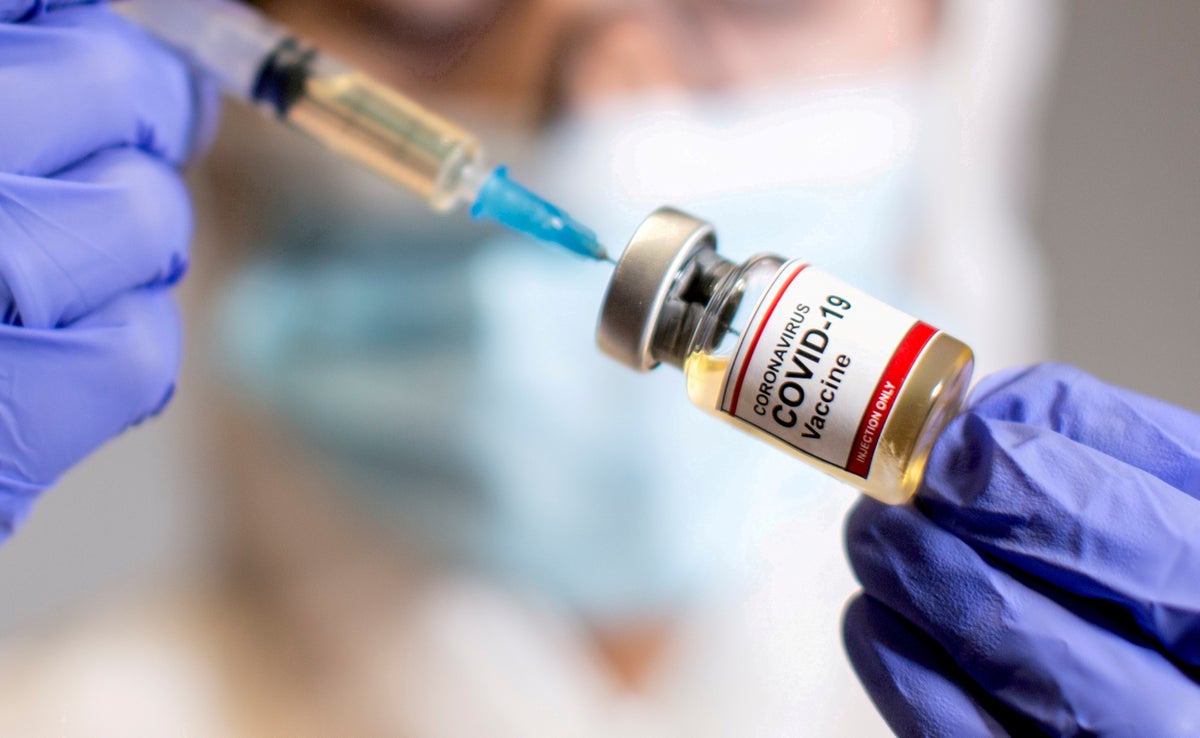 Britain raced ahead in the battle to secure vaccine supplies by announcing bulk manufacturing of up to 60 million doses of a new jab.

French firm Valneva announced the start of large-scale commercial production at a plant in Livingston that has been upgraded with funds from UK taxpayers.

It indicates high confidence on both sides that the Valneva jab is in line for approval from official regulators in time for its planned distribution in early summer.

An extraordinary 7.2 million people have received at least one dose of vaccine in Britain so far. The new boost from a specialist French company will dismay the European Commission, which is under fire from member states for inadequately preparing for the world-wide scramble for vaccines.

The Commission was empty-handed last night after failing to persuade Oxford jab maker AstraZeneca to divert 70 million doses, purchased by and made in the UK, to EU countries.

Senior Cabinet minister Michael Gove was adamant that Britain’s contracts could not be hijacked, saying: “Supplies which have been planned, paid for and scheduled should continue. Absolutely. There will be no interruption to that.”

But he sought to calm the situation with an offer of “friendly” co-operation to help EU countries after a sour mood in which Brussels politicians have made threats of sanctions, legal action and even a trade war. “We all want to do everything possible to make sure that as many people in countries which are our friends and neighbours are vaccinated,” Mr Gove told Today. “And I think that we best achieve that through dialogue and co-operation and friendship.”

Under the national plan for vaccinations, the UK has portfolio of 100 million Oxford/AstraZeneca doses, 40 million of the Pfizer jab, and 17 million of the Moderna vaccine, in addition to 60 million planned from Valneva.

The Scottish go-ahead for Valneva was announced at 7am on a day that the Prime Minister was heading to Scotland to launch his campaign to see off the Scottish National Party’s call for another referendum on separation.

Boris Johnson immediately tweeted while on the journey north: “It’s brilliant that @valnevaSE is starting the large-scale manufacture of its potential vaccine, creating 100 high-skilled jobs at their Livingston facility.”

The success of the UK roll-out is cited by minsters as evidence that Scotland can do better in the United Kingdom than by breaking up the Union and asking to rejoin the EU.

Health Secretary Matt Hancock said the Scottish production was “another fantastic example of the strength of our Union”. He tweeted: “The Valneva vaccine will be another vital tool in our fight against the virus, if approved.” Scottish first minster Nicola Sturgeon complained that Mr Johnson’s trip north was “not essential” travel within coronavirus restrictions.

The Valneva jab is an “inactivated whole virus” vaccine that stimulates an antibody response.

One of Britain’s top scientists said coronavirus vaccines must be made available around the world in an effort to keep cases down and prevent new mutations which could escape the effects of the jabs.

Sir Jeremy Farrar, a member of the Government’s Scientific Advisory Group for Emergencies (Sage), said the amount of virus circulating in the world will determine the chances of a new variant emerging. He warned that new strains are “a warning of what is coming, which we must take incredibly seriously”.

While variants detected so far do not appear to get round the vaccines, something Sir Jeremy described as “hugely positive”, he cautioned that we are “in something of a race” with a virus which is bound to mutate over time.

He told Today: “In the future I think we will see variants that escape from the vaccines. The thing to do at the moment is to vaccinate as many people as we can in the world, to drive down the amount of transmission and prevent these new variants coming.

“That’s in our national interests, it’s in an equitable and ethical interest, and it’s in the world’s interests to do so.” Labour leader Sir Keir Starmer called on the Government to “resolve” the dispute with the EU. “I don’t want to interrupt the supply of vaccines into the United Kingdom,” he told LBC Radio. “But we do need to resolve this, it is a war of words, it has got to be resolved.”

She claimed the company had breached “the letter and the spirit of our agreement” and that it was contractually obliged to send jabs produced in the UK to 27 EU member states where there are shortages.

Meanwhile, Former prime minister Tony Blair has called on Mr Johnson to use the G7 to push a global coronavirus vaccine passport scheme.

Cabinet minister Michael Gove said on December 1 that there were no plans for a passport for those who have been vaccinated, though the Telegraph reported on Sunday the Government is funding at least eight separate firms to develop such a product, which is already in use in countries in the Middle East and Asia.

Mr Blair said the UK needed to take advantage of its presidency of the G7, which aims to meet in Cornwall in June, to lead the drive for a global vaccination passport to allow borders to reopen safely and travel to resume.

He told the Telegraph on Thursday there were two significant risks if Mr Johnson did not convince his fellow leaders to back such a scheme.

"One is that everyone just does their own thing, which is much more chaotic and difficult to manage. Or secondly, there's a set of rules in place that you may not be that happy with."

The leaders of Spain, Italy, Greece, Cyprus and Malta have called for the introduction of certificates which designate if a traveller has been vaccinated or not.

On Monday, Australia's education minister, Alan Tudge, said planned "digital vaccine certificates" would allow international students to return to study in the country without the need for them to hotel quarantine.