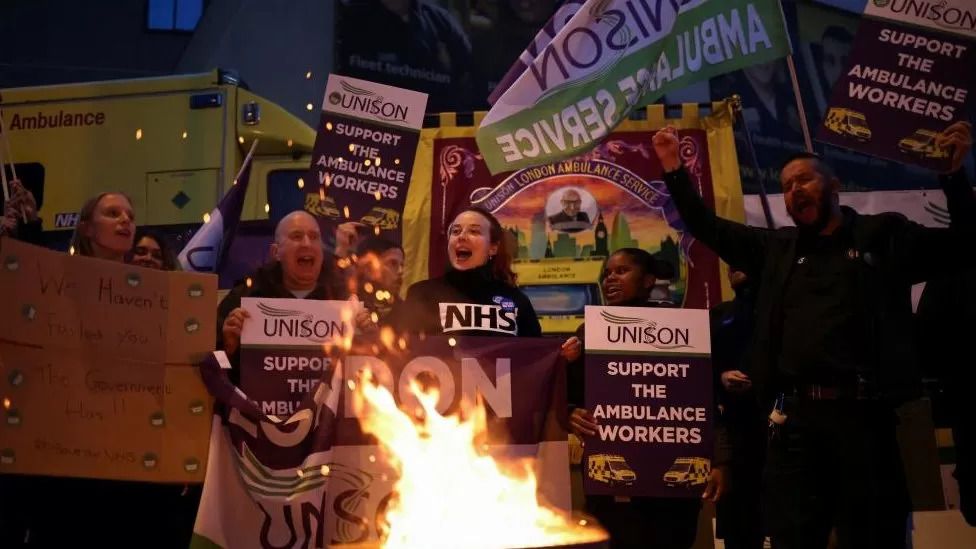 Hospitals have been quieter than normal during a day of ambulance strikes, but Thursday is likely to be "very challenging" with lots of patients turning up, health bosses say.

Only the most serious 999 calls have been responded to.

But there is no evidence of people going to A&E in taxis or their own cars, NHS Providers told the BBC.

Thousands of paramedics, call handlers and technicians are taking action in England and Wales until midnight.

Saffron Cordery, interim chief executive of NHS Providers, which represents hospital trusts, mental-health trusts and ambulance services in England, said it was still too early to know the full impact of the strike, but she said category-one calls - which are life-threatening situations - "had been answered".

And she said she had heard talk of union members "coming off the picket line" to answer those calls.

But she warned of a rebound effect over the coming days as large numbers of people turn to the health service, pushing up demand to levels similar to the day after a bank holiday.

"Tomorrow and Friday are going to be incredibly difficult days across the NHS because there is a lot of unseen demand and risk out there," she said.

"People have changed their behaviour today. They've heeded the call not to use services.

"But some will have chosen not to use them at all, even though they need them." 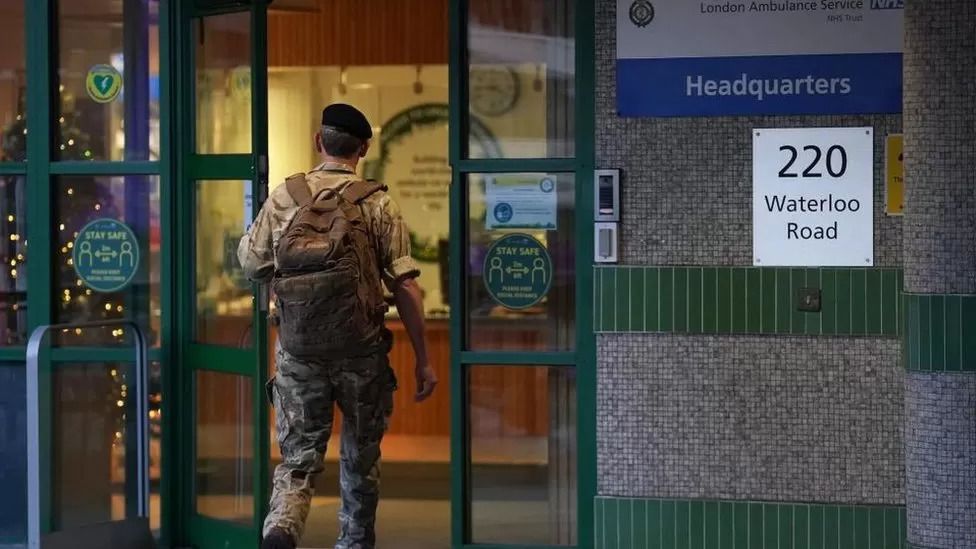 The military were drafted in to fill behind striking staff
Andrew Morgan, chief executive of United Lincolnshire Hospitals said there had probably been more walk-ins on Wednesday.

This can create "more of an issue" because staff do not know people are coming in or what is wrong with them, he said.

Mr Morgan said Thursday could be a "very difficult day" - predicting that people who thought they should not call an ambulance or should stay away from emergency departments on Wednesday would come in.

A spokesperson for West Midlands Ambulance Service - one of nine where industrial action was taking place in England - said there had been a reduction in calls and staff were grateful to the public for heeding advice to call 999 only in life-threatening situations.

Meanwhile, South East Coast and Yorkshire Ambulance Services said they were still in the midst of a critical incident - a level at which there is an unusually high amount of pressure on services.

Unions have agreed that ambulance workers will still respond to category-one 999 calls and the most serious category-two calls (emergencies, including strokes and major burns) during strikes, but there would be no guarantee of a response to less urgent calls, such as falls.

This prompted Health Secretary Stephen Barclay to accuse unions of taking a conscious decision to inflict harm on patients - an accusation that Unite union leader Sharon Graham said was a "blatant lie".

"The unions have negotiated critical cover, including 999 calls, at a local level with hosts of NHS trusts. That is how it is done," she said.

People were also being urged to use their own transport or take a taxi to get to hospital, and some hospitals are advising pregnant women very close to their due date to make alternative plans to travel there, should they need to.

But Ms Cordery said that "as far as we can tell", people had not been attending A&E in taxis or by their own vehicles.

The strikes come at a time when the health service is already under immense pressure.

Lengthy ambulance response times, long delays to hand over patients at A&E departments, and patients not being discharged quickly enough from hospital when they are ready to go home are creating a 'flow' problem, experts say.

Ambulance waits for calls classed as emergencies have doubled in two years - from an average of around 20 minutes to more than 40 minutes. The target is 18 minutes.

There are also record-high numbers of people waiting for operations - now seven million in England alone - an issue that has been made much worse by the Covid pandemic.

What's happening in my area?

Not all unions are striking over the same hours on Wednesday, and it is difficult to say how many employees at each individual service will strike.

You can use our interactive tool to find out which unions are on strike at your local ambulance service.

Today's strike only involves staff in England and Wales.

Ambulance workers are demanding a pay rise above inflation which they say will improve morale and help prevent staff, faced with rising pressures, from leaving their jobs.

But government ministers say most ambulance staff have received a pay rise of at least 4%, taking average earnings to £47,000. A further pay increase would mean taking money from frontline services, they added.

The GMB union voted to reject a pay deal from the Scottish government - but it is not striking there today because it's still considering its next steps, and it says it hopes strike action will not be necessary.