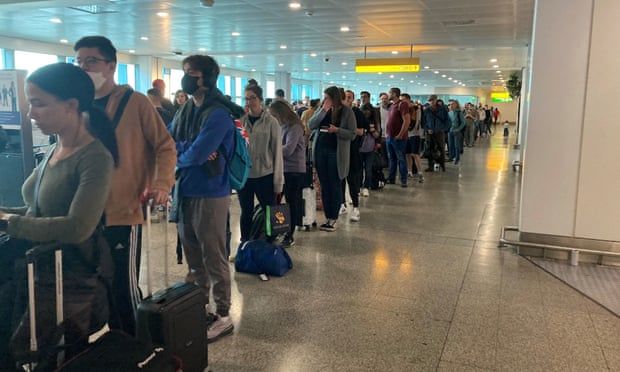 Willie Walsh, director general of Iata, said it was now taking as long as three months to get security badges for new employees in the UK, compared with three to four weeks previously, meaning potential staff were seeking out other jobs.

Thousands have seen their half-term getaway plans upended by flight cancellations and lengthy queues at major transport hubs in the UK, including Heathrow, Manchester, Gatwick and Glasgow airports, amid a surge in demand and lack of ground and air staff.

EasyJet has cancelled more than 200 flights at Gatwick between 28 May and 6 June and Tui announced on Tuesday it would ditch six takeoffs a day from Manchester until the end of June.

The government said the Department for Transport (DfT) had been urging the travel industry “for months” to ensure they had enough staff to deal with the increased demand and backlog of cancelled holidays.

Walsh, the former chief executive of British Airways owner IAG, said: “The problem is, you can’t start the training until you’ve got the security clearance.

“You offer them a job, they accept it, and then you have to go through this period of three months to get security clearance – they’re not gong to hang around. They’ll go and find a job somewhere else.”

Walsh added the issues were only at “some airports and not across the world” and that it reflects a “significant increase in activity” as airports and airlines try to rebuild after the impact of Covid-19.

In April, the transport secretary, Grant Shapps, announced new measures to try to speed up the recruitment process, saying that new hires to the aviation sector would be permitted to begin training before passing security checks.

The government said on Tuesday that it had been pressing the travel industry “for months” to ensure that after Covid restrictions eased they had enough staff to deal with the rise in demand and backlog of postponed holidays.

The arts minister, Stephen Parkinson, told Sky News: “Colleagues in the Department for Transport are working with the industry. We have been for months urging them to make sure they’ve got enough staff.”

Labour accused the government of not having prepared for the holiday surge in demand.

The shadow financial secretary to the Treasury, James Murray, told Sky: “We were warning about this, trade unions were warning about this, employee representatives were saying throughout the Covid pandemic: ‘You need a sector-specific package to support the aviation sector.’ And now we’re seeing what’s happened because the government hasn’t prepared for what would obviously come next.”
#COVID-19  #Covid
Add Comment