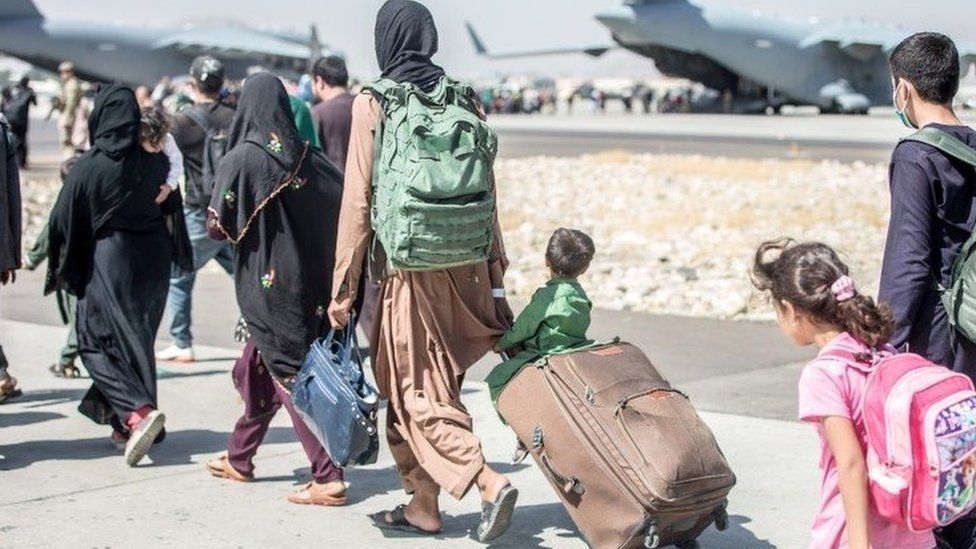 Afghanistan: UK nationals warned not to travel to Kabul airport

People in Afghanistan should stay away from Kabul airport due to a "high threat of a terrorist attack", the UK Foreign Office has warned.

In new advice, the FCDO told anyone in the area to "move away to a safe location and await further advice".

US President Joe Biden has warned of a group linked to Islamic State that is seeking to target the airport.

It comes amid a race to evacuate thousands from Kabul ahead of the 31 August deadline when troops will leave.

In the update issued on Wednesday evening, the FCDO warned Britons there was "an ongoing and high threat of terrorist attack", and that travelling by road was "extremely dangerous", with people alleged to have been "mistreated" on their way to the airport.

The government has said the UK's aim to complete the operation ahead of 31 August is moving at "significant pace", with more than 11,000 people evacuated with the help of UK troops, according to the Ministry of Defence (MoD).

On Tuesday, President Biden rejected calls from Prime Minister Boris Johnson and other allies to delay the withdrawal date for remaining American soldiers beyond the end of the month.

Kabul airport is currently being defended by 5,800 US and 1,000 British troops.

Meanwhile, Defence Secretary Ben Wallace has told MPs that Afghans wanting to flee to Britain may be better off trying to reach one of Afghanistan's borders instead.

The Foreign Office has previously warned against all travel to Afghanistan, and cited the possibility of terrorist attacks.

But the new advice is very specific. Do not travel to Kabul airport. If you're in the area, move away to a safe location and wait for further advice.

Officials won't elaborate on the nature of the threat, but this change comes just 24 hours after President Biden warned of the danger posed by extremists linked to the group calling itself Islamic State.

Commanders dealing with vast crowds around the airport are increasingly concerned about the possibility of suicide attacks.

What the new advice means for the British evacuation operation is not clear.

The MoD said that since 13 August, when the evacuation mission started, a total of 11,474 people had left Afghanistan. That includes almost 7,000 Afghan nationals and their families.

About 2,000 people eligible for ARAP remain in Afghanistan, but the plan is to evacuate more in the coming days, the BBC was told earlier ahead of the new FCDO advice.

Since the Taliban takeover, more than 82,000 people have been airlifted out of Kabul airport, US Secretary of State Antony Blinken said. About 10,000 are waiting to be evacuated by the US.

Mr Blinken said the Taliban have promised to allow foreigners and Afghans to leave beyond the end of August, adding that the US and its allies had "a responsibility to hold [the Taliban] to that commitment".